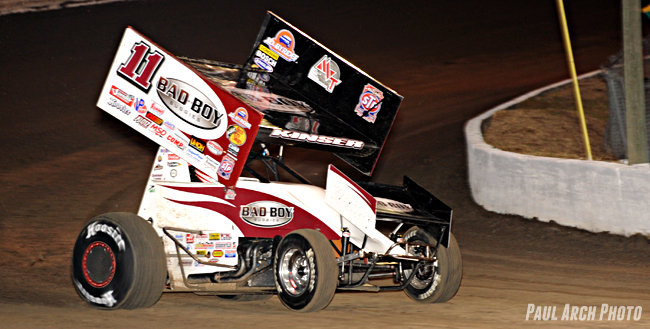 At end of highly successful West Coast swing, Outlaws have one last track to invade before heading East

EL PASO, Texas — April 15, 2013 — The World of Outlaws STP Sprint Car Series has been racing through the Western states since early March, and it has one piece of unfinished business on Tuesday night in Texas before it returns to the Midwest.

Since March 6 the hardest working drivers in sprint car racing have taken on all comers at nine tracks in Nevada, Arizona, and California comprising 11 races. Those events have showcased eight different winners. In total, 22 drivers have scored at least one top-five, and that makes this an incredibly competitive swing for the touring series. As a brand new venue for the Outlaws, the 3/8ths-mile, slightly-banked El Paso Speedway Park should provide the same level of competition, which means fans will have no idea of who is likely to win Tuesday night.

Tim Kaeding and Daryn Pittman will certainly be in the mix, however, as they carry over a furious battle from Perris Auto Speedway. Pittman snatched the lead from Kaeding with 12 laps remaining in the SoCal Showdown in a pass that was a little too close for Kaeding’s comfort.

In the 11-race Western swing, Kaeding has made the most of his opportunities and scored victories at the Las Vegas Dirt Track and Thunderbowl Raceway in Tulare, Calif. He nearly added a third victory in Saturday night’s SoCal Showdown. Kaeding is best-known in his native California, but because he was so successful in the Western swing he will continue battling the Outlaws as the series returns to the Midwest and East Coast. In this span of races, Kaeding has scored an impressive eight top-five finishes.

Pittman will not go down without a fight, however, and is not far behind in terms of top-five finishes. He won the Wildcat Shootout presented by NAPA Auto Parts at Tucson International Raceway and beat Kaeding to the line at Perris to take his second win of the Western swing and his third for the season. Pittman also won the opening night of the UNOH DIRTcar Nationals Presented by Summit Racing Equipment at Volusia Speedway Park in Barberbville, Fla., back in February. In total, Pittman has seven top-five finishes in the latest 11 races, which gives him a ton of momentum heading into El Paso.

The odds are good the World of Outlaws STP Sprint Cars will add another name or two to the list of top-five finishers in this Western swing because there are some notable superstars missing from the current list as well as a strong list of locals, including Steve Kinser, who is the only full-time driver in the field with experience at El Paso.

Tickets can be ordered online through midnight by clicking WorldofOutlaws.com/tickets, otherwise tickets can be purchased at the gate on Tuesday. The front gate is set to open at 4 p.m.