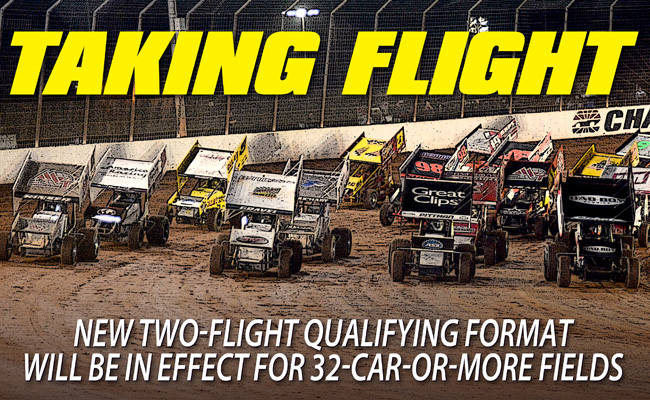 CONCORD, N.C. – June 11, 2015 – The World of Outlaws Sprint Car Series announced today a new two-flight qualifying format for when there are 32 or more cars competing at an event. The long-planned update comes after months of consultation with team owners and competitors.

“We are excited to be able to finally implement this in the series,” said World of Outlaws Sprint Car Series Director Carlton Reimers. “We believe this format will help to minimize the effect of a changing race track on qualifying and will create a more equitable playing field for all of our competitors.”

The two-flight qualifying will be in place when the series has 32 or more cars; the procedure will otherwise remain the same as it has been all season. Under the new format, the field of cars will be split into two flights based on the pill draw. The first half of the draw will comprise Flight A and the second half of the draw Flight B. Flight A will qualify, then Flight B, which will create two qualifying results.

Heats 1 and 2 will be lined up by times from Flight A, with four cars inverted, and the top five finishers transfer to the A-Main. Heats 3 and 4 will be from Flight B. Heat winners and the top two fastest qualifiers in each Flight that made the transfer go to the Dash. The fastest car of the night will still be awarded quick time and one championship point.

During Dash inversion draw for all events, drivers will see the removal of the 8 pill, leaving the 0, 4 and 6.

Two Last Chance Showdown lineups will be based on corresponding qualifying Flights and Heats.

This update goes into effect immediately.

“As a series we are constantly evaluating how to improve the racing experience for our competitors and fans,” Reimers said. “Implementing the new two-flight procedure now allows us to improve the experience for everyone involved immediately. We look forward to seeing the improvements in place this weekend.”

Additionally, at 49 or more cars, the series will add two Heat races for a total of six. At 61 or more cars, a second C-Main will be added.

This two-flight qualifying accompanies a 20-or-fewer cars format that was introduced earlier this season. Under that format, pill draw and qualifying proceed as normal. The entire field is then divided into two Heat races with the top-four inverted. The winners of those Heat races and the next 2 fastest qualifiers that finish in the top six transfer to the Dash. The remaining cars are split into two qualifiers lined up by Heat finish. The winner and next two fastest qualifiers that finish in the top six, from the qualifier races make up the remaining Dash field.