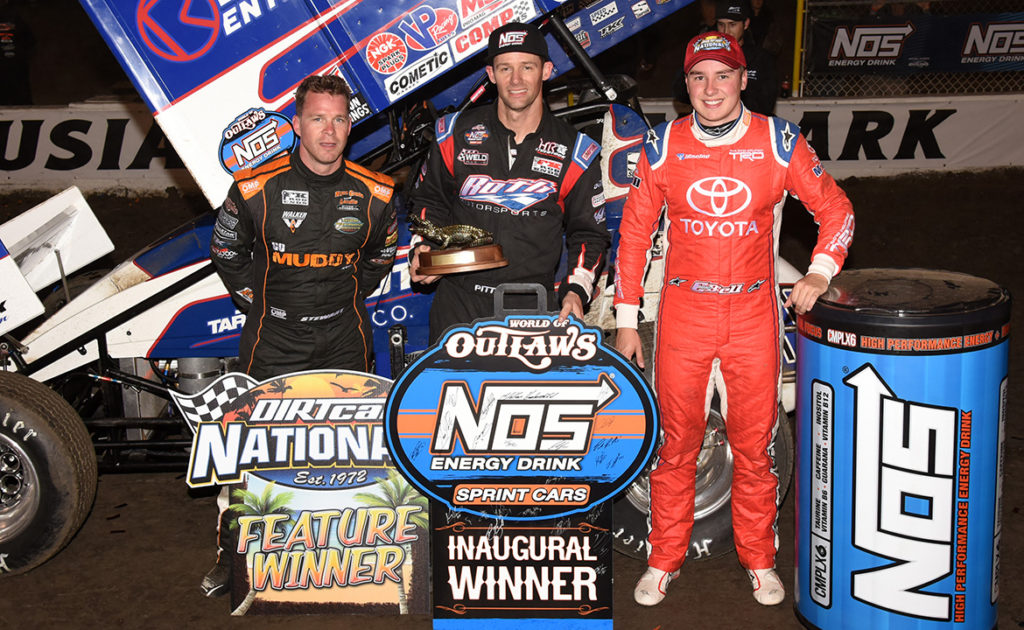 CONCORD, NC – There’s something in the water in Oklahoma. At least you might think that when looking at last week’s Sprint Car results from the DIRTcar Nationals at Volusia Speedway Park.

Oklahoma natives Daryn Pittman, Shane Stewart and Christopher Bell dominated about a week’s worth of Sprint Car racing in Florida.

The three drivers also made Series history by being the first Oklahoma trio to finish on a podium during the Series’ opening night. Now, Pittman and Stewart are bringing their high-speed thrill show to Texas on Friday, Feb. 22, at Cotton Bowl Speedway in Paige, and on Saturday, Feb. 23, at LoneStar Speedway in Kilgore.

To the three Okies, their early season success is just a funny coincidence, but their career trajectory may tell another story.

“We all grew up cutting our teeth at Port City (Raceway, in Tulsa),” said Stewart, who hails from Bixby, Okla. “It’s just a little bull ring, the perfect size for a Micro (Sprint).”

Micro Sprints were — and still are — one of the most popular cars to grow up racing in Oklahoma, Pittman said.

“We have two of the biggest Micro chassis manufactures in town, between Sawyer and Factor 1,” said Pittman, a native of Owasso and the only World of Outlaws NOS Energy Drink Sprint Car Series champion from Oklahoma (2013).

Every Friday night at Port City Raceway, Stewart said, there would easily be 40 to 50 Micro Sprints per class.

“I think there was just a lot of competition,” Stewart said. “I think it taught us how to race really well, adapt to different types of cars and speed as quickly as we could.”

Stewart, a 33-time Series winner, added, the intense level of competition taught drivers what it takes to be competitive.
The popularity of Micro Sprint racing in Oklahoma, allowed for copious racing opportunities, according to Bell, who arrived on the national scene from Norman, Okla. Racing a lot was one of the biggest lessons he learned at an early age, and still implements today.

“I could go run two nights a week and run three divisions on both nights,” Bell said. “We raced two nights a week and got to run six features in a weekend. That’s one thing I’ve always thrived on, is being able to race a lot. Ever since I ran the Micro Sprints and ran two to three divisions a night, now I run as much racing as I can throughout all different disciplines of cars. I think racing a lot helped big time.”

In addition to his more than 30 race NASCAR Xfinity Series schedule, Bell said he plans to run about 20 to 25 Sprint Car races this year with the No. 39 Swindell SpeedLab team. He started off 2019 winning his third Chili Bowl in a row.

“The biggest thing for me is, the way I get better is by racing cars,” Bell said. “If I’m sitting on the couch, I’m not becoming a better race car driver.”

He cited Sprint Cars as the hardest cars to drive, as well.

While Bell has established himself as a competitive Sprint Car driver — having won four Series races, so far — he didn’t grow up with local Sprint Car racing, like Pittman and Stewart did.

“When I grew up, it (Oklahoma) had a really successful quarter midget program, then you had a Micro program you could move up to at a different track, and then there was a Sprint Car track in town, as well,” Pittman said. “So, there was always kind of that next step for drivers to continue to move up, and a lot of that has kind of died off since.”

He credits the local Sprint Car racing scene as one reason there were so many Oklahoma drivers in the late 1990s and early 2000s. Original Outlaw Shane Carson, 42-time winner Andy Hillenburg, and Lance Blevins are three examples.

But that scene has died off, Pittman said. Gone before Bell’s time.

When he moved up to Sprint Cars, Bell said, like Pittman and Stewart, he spent a lot of time racing out of state at tracks such as Devil’s Bowl Speedway in Mesquite, Texas, where the Series heads April 12-13 for the Texas Outlaw Nationals.

To Pittman, Bell is the most talented driver to come out of Oklahoma.

“He’s crazy talented, for as little he drives these (Sprint) cars,” Pittman said. “No matter what he jumps in, he makes it look easy. And I’m jealous how easy he makes it look, especially when I know how hard I work to get to where I’m at and he comes out and beats us fairly regularly, with a lot of inexperience.”

Stewart echoed Pittman’s comments about Bell’s talent. But also cited the Oklahoma drivers’ work ethic is a result of growing up in the state.

“It seems like people who come from there (Oklahoma) work really hard,” Stewart said. “We’ve all worked hard to get to where we are. It is just neat to see all of us guys doing well.”

Don’t miss a chance to see Pittman, Stewart and the World of Outlaws NOS Energy Drink Sprint Car Series Feb. 22-23 in Texas at Cotton Bowl Speedway and LoneStar Speedway, and again in April at Devil’s Bowl Speedway, where the Series came to life in 1978.

Tickets are available online at WorldofOutlaws.com/tix or by calling 844-DIRT-TIX.