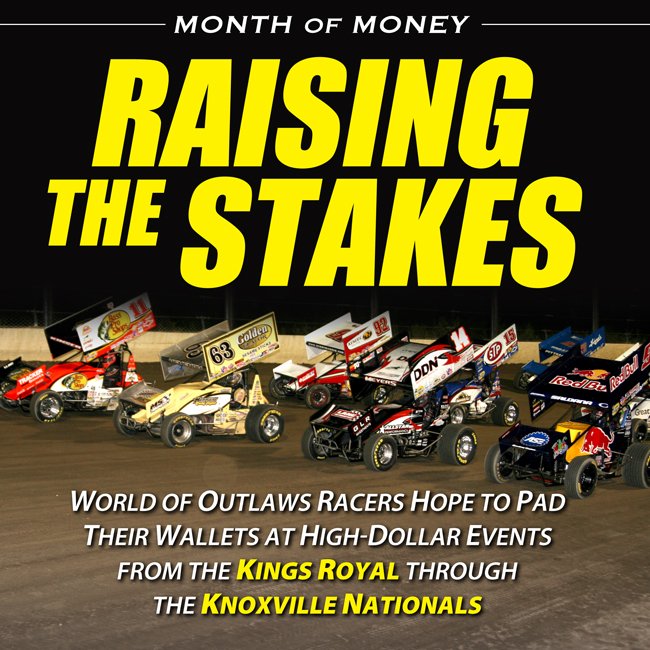 CONCORD, N.C. — July 13, 2011 — Every young driver dreams of winning a big race, to pull into victory lane to flash bulbs going off, crews and family cheering and the adoration of a large crowd as they step out of the car to soak it all in. For drivers on the World of Outlaws Sprint Car Series Circuit, the opportunity to experience this feeling of tremendous success and accomplishment can happen many times throughout the course of the season. However, the feeling grows stronger for a period of four weeks from mid-July through mid-August with more than a dozen huge events capped off by the 51st Goodyear Knoxville Nationals. At this point, The Greatest Show on Dirt is racing more than it does at any point during the season, and for much more money.

“The month of money is a time where you and your team really want to be running well,” said Joey Saldana, who has taken four checkered flags so far this year in his Kasey Kahne Racing Red Bull Maxim. “It’s really an opportunity to show what your team can put together and how well you can drive. The best drivers from all around come out for this stretch of races. Even if you don’t win a title, you can still call a season a success if you win some of these big races.”

Saldana and his team have regained some confidence heading into this weekend’s Kings Royal at Eldora Speedway near Rossburg, Ohio. The annual $50,000-to-win event is a staple on the series schedule and will be covered by the cameras from SPEED. With Saldana’s victory at the track in May during the Goodyear Thunder Weekend, he and his team are confident about their chances.

“Forty laps is a long time to run at Eldora,” said Saldana, of Brownsburg, Ind. “It takes a lot of focus and determination as well as taking care of your equipment. I think we should be pretty good there based on our run there earlier this year.”

After the winner is crowned at Eldora, the teams will head for Lernerville Speedway in Sarver, Pa., and the Don Martin Memorial Silver Cup, where two 30-lap A-mains, the second of which will invert cars from the first, will pay out a total of $30,000 to the winners from a monster $100,000 purse — the largest purse of any single-day event on the tour. In a new wrinkle this year, the overall Silver Cup champion must win at least one of the two A-mains.

“It’s really going to add some excitement,” said Lucas Wolfe, driver of the #5W from Mechanicsburg, Pa. “You will have a guy that wins the first one who needs to come up through the field in the second feature to try to win the cup. That will make things more dicey and should put on an excellent show for the fans.”

From Lernerville the tour returns to Williams Grove Speedway in Mechanicsburg, Pa., July 22-23  when the Morgan Cup will be contested after Saturday night’s main event. This unique 11-lap race has a $12,000-purse and carries bragging rights for one of the most storied rivalries in all of Sprint Car racing: Outlaws vs. Posse. The top-five finishers from each group at last year’s National Open will vie for the beautiful sterling silver trophy and cold hard cash.

The Month of Money then rolls to New York, Canada, Indiana and Missouri, where I-55 Raceway is the site for the annual Ironman 55, the most grueling race on the schedule. With 55 laps around the 1/3-mile high-banked bullring in Pevely, even the most fit drivers and their machines will be tested. Last year, Jason Meyers and Wolfe went wheel-to-wheel in a battle for the win with Meyers taking the checkers in one of the most exciting finishes of the entire season.

Closing out the 12-race stretch is the $150,000-to-win 51st Goodyear Knoxville Nationals, providing the bookend to what will no doubt be a number of chapters over the next few weeks and setting the stage for The Great Northern Tour, the Gold Rush Tour and the stretch run to the World Finals championship weekend in Charlotte.

The Month of Money is one of the most exciting times of the year for the World of Outlaws Sprint Car Series as the points battle continues to heat up. With all dirt roads leading to the World Finals at The Dirt Track at Charlotte, this 12-race stretch could make or break a team’s season and could mean the difference between winning or losing the season-long title.

For more about the World of Outlaws Sprint Car Series, click www.WorldofOutlaws.com