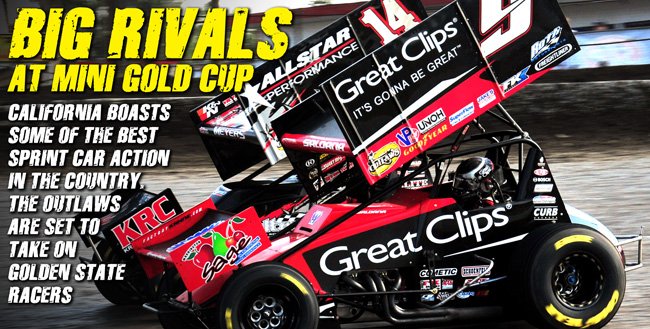 CONCORD, N.C. — Feb. 13, 2012 — Much like the Outlaws versus the Posse in Pennsylvania, the state of California has created a rivalry with the World of Outlaws.

While there are 11 Outlaw events in California on this season’s schedule, some of the biggest challenges will come to a head at Silver Dollar Speedway in Chico, Calif.

The high-banked, quarter-mile oval hosts a pair of World of Outlaws events, including the Mini Gold Cup on March 23-24. The two-day race is in the middle of the Outlaws’ first seven-race swing through the Golden State.

“California has a pretty good, stout field of cars,” said Joey Saldana, who has won three of the past nine World of Outlaws races at Silver Dollar Speedway.

“I actually feel sorry for them. You always hear about Williams Grove and the PA Posse. California has some great drivers. They have a 410 series out there, so it’s a tough situation. It’s their home track and they race there a lot. You definitely have to run real hard.”

This will be the 10th year the World of Outlaws have sanctioned the famed Mini Gold Cup, which was established in 1987 (Between 1993-2008, it wasn’t a World of Outlaws event.). While six of the eight features (one year was rained out) have been claimed by a World of Outlaws driver, the California contingent has been competitive.

Californians Jimmy Sills and Brent Kaeding each won a Mini Gold Cup in 1988 and 1991, respectively. Since then, Californians have been in contention and the top 15 is usually littered with a variety of Californians.

Kyle Larson – the state’s most recent star – finished 16th. However, he recorded his first career World of Outlaws victory last September at the same track during the 58th annual Gold Cup.

“There’s a lot of good cars in California that are competitive to begin with,” Tim Kaeding said. “When the Outlaws come out, it brings out the best in all of us. We all bring our A game when they come out here, especially when they come to short tracks and bullrings.