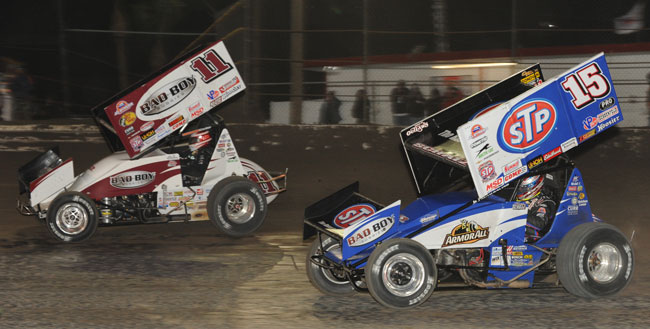 Outlaws team with the Las Vegas Wranglers for buy one, get one free opportunities

LAS VEGAS – Feb. 27, 2013 – With the World of Outlaws STP Sprint Car Series kicking off a six-week tour in the west next Wednesday, the series is offering a unique promotion at the first destination.

Local fans in the Las Vegas area who attend a Las Vegas Wranglers – the state’s professional hockey team – game either this Friday or Saturday can bring their ticket stub to the World of Outlaws STP Sprint Car Series event at The Dirt Track at Las Vegas next Wednesday, March 6, to receive a buy one, get one free opportunity.

Additionally, fans who attend either the Wednesday or Thursday race at The Dirt Track at Las Vegas can take their ticket stub to the Las Vegas Wranglers game on either March 19 or March 26 to receive a buy one, get one free promotion.

Local military members can also take part in a buy one, get one free event on Wednesday at The Dirt Track at Las Vegas by presenting their military identification.

Tickets for the World of Outlaws STP Sprint Car Series events next Wednesday and Thursday can be ordered online by clicking WorldofOutlaws.com/tickets or by calling 877-395-8606.