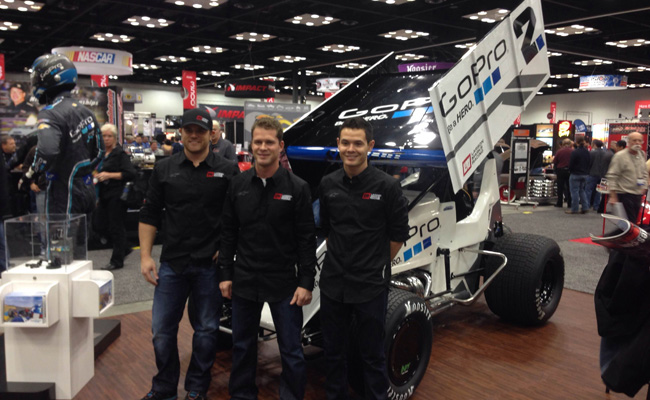 INDIANAPOLIS, Ind. (December 12, 2013) – Today at the Performance Racing Industry Show, Larson Marks Racing unveiled their car, which will run a part-time schedule in the World of Outlaws STP Sprint Car Series in 2014. Shane Stewart will drive the No. 2 car for the team next season. Larson Marks Racing (LMR), owned by NASCAR Sprint Cup Series driver Kyle Larson and racer and businessman Justin Marks, plans to compete full time in the series in 2015.

“I know I’m still young, but this is something that I have always wanted to do,” said Kyle Larson, co-owner of LMR and a sprint-car standout who will drive full time in the NASCAR Sprint Cup Series in 2014. “I think Justin and I have put together a really solid team with the potential to have a lot of success, and I think Shane is a fantastic driver. He is one of the best guys on and off the track, and I know he can go out and get it done for our team.”

GoPro will serve as the team’s primary sponsor in several big events in 2014, adorning the No. 2 at the Knoxville Nationals and the Kings Royal at Eldora in addition to some West Coast races. GoPro has a long-standing relationship with LMR co-owner Justin Marks. GoPro served as the sponsor in Marks’ NASCAR Sprint Cup Series debut in 2013 and is the naming-rights sponsor of GoPro Motorplex, the premier go-karting facility for recreational and competitive racing that Marks owns in Mooresville, N.C.

“This is a really exciting day for Larson Marks Racing,” added LMR co-owner Justin Marks. “Owning a team is something I have wanted to do for a long time and partnering with Kyle is really special. We are really thrilled to have Shane drive for us; we know he’ll do a great job. To have GoPro want to be a part of this venture is something that I am really excited about. I have had a very special relationship with them for a long time, and more than a great partner I consider them to be great friends. To have GoPro want to continue that relationship and be a part of Larson Marks Racing means a lot to our team. We all can’t wait to see the No. 2 GoPro car on the track.”

Shane Stewart has been tapped by LMR to drive for the team in 2014. Over the course of his 20-year racing career, Stewart has amassed more than 100 feature wins. He has two American Sprint Car Series championships and has won the Knoxville 360 Nationals a total of five times, including the last four years.

“It really means a lot to me that Kyle [Larson] and Justin [Marks], two accomplished racers and great guys, saw the potential in me and want me to drive for them,” commented Stewart. “I am really looking forward to getting on track with the Larson Marks Racing team. I think 2014 is going to be a really good year for us, and I know Kyle and Justin are going to build a really solid team. Hopefully I can help make a name for us next season.”

LMR’s 2014 race schedule is still to be determined, but the Charlotte, N.C. area-based team plans to run 45 to 50 410 sprint car races. The team, which will be led by veteran crew chief Steve Suchy, is in the process of establishing chassis and engine partners. LMR will hit the track for the first time when the World of Outlaws visit the West Coast in early 2014.