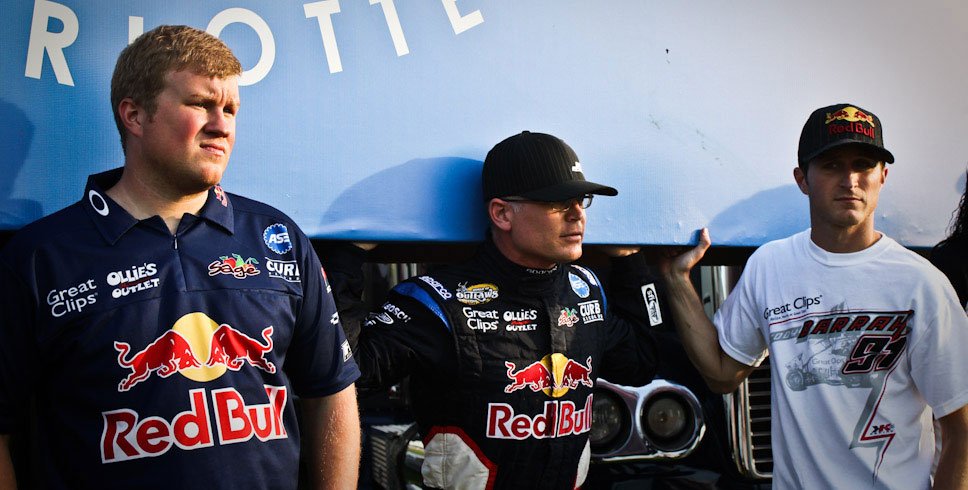 ALGER, Wash. — September 1, 2011 — Drivers and crew members who compete in the World of Outlaws Sprint Car Series come from every corner of the United States and, in some cases, the world. For NASCAR star Kasey Kahne and his three Sprint Car teams, when the World of Outlaws invade Skagit Speedway north of Seattle on Friday and Saturday, it’s as close to a homecoming as they will get during the 2011 season. (Photo courtesy of Blackbeard Ltd.)

Kahne, a native of Enumclaw, Wash., raced Sprint Cars there growing up, and even claimed two prestigious Dirt Cups. His Kasey Kahne Racing (KKR) World of Outlaws teams are truly a family operation and include his brother, Kale, who crew chiefs the #9 Red Bull car; his cousin Willie, who manages the team; his cousin, Kole, who works in the team’s Mooresville, N.C., shop; and his sister, Shanon, who runs the team’s office.

“We’ve been going to Skagit ever since I was 2- or 3-years-old it seems like,” said Kale. “Kasey won quite a few races up there and my dad (Kelly) was always sponsoring people that raced. It’s very cool that we’ve won up there and had a lot of success. We’ve also run really well with Joey (Saldana) over the years. It’s just a special place for us and a really cool track.”

Kale Kahne has gone through quite a bit in his first year as the head wrench turner on a Sprint Car. Responsible for car maintenance in the past, the younger Kahne was promoted to crew chief after Willie Kahne tabbed to head up Factory Kahne shocks this past off-season. The duo of Saldana and Kahne proved to have chemistry right away as Saldana recorded early season wins at Las Vegas Motor Speedway and Thunderbowl Raceway in Tulare, Calif.

The tandem was coming off of its fourth win of the season at Beaver Dam (Wis.) Raceway when disaster struck at the 28th Annual Kings Royal at Eldora Speedway near Rossburg, Ohio. Saldana was involved in a horrible crash that left the Brownsburg, Ind. native hospitalized for a week with a shattered right forearm, broken ribs and a collapsed lung. Saldana is expected to miss the rest of the season while the team has put Californian Brad Sweet in the car in the interim.

“It was difficult losing Joey midseason because we were really starting to get a package together that was working really well,” Kale said. “Since Brad took over at Lernerville (on July 19), we’ve been working to get back to that point. I don’t think the chemistry between he and I is as strong as what Joey and I have yet but we’re working on it. Our results are starting to pick up and we’re timing in really well.”

Just this past Saturday night at Castrol Raceway in Edmonton, Alberta, Sweet finished second to KKR teammate Cody Darrah, completing a confidence-boosting 1-2 sweep for the team.

Another KKR member who is excited to race at Skagit is Paul McMahan, driver of the #83 Roth Motorsports/H.R. Cattle Maxim — a car operated in partnership with KKR. A native of Elk Grove, Calif., McMahan remembers racing at Skagit growing up and agrees a win at the track by any of the KKR drivers would be big.

“It would be great to win there,” said McMahan, who now lives in Nashville, Tenn. “Kasey’s not the type of owner who puts a lot of pressure on you. I put more pressure on myself than he does. I went up there a lot since I grew up in California. Went to several Dirt Cups and raced pretty well. We ran great last year so we’re hoping to be even better this year.”

With three hungry drivers and teams, Kasey Kahne Racing will lead the World of Outlaws Sprint Car Series into Skagit Speedway to kick off a Labor Day weekend extravaganza on Friday, Sept. 2, and Saturday, Sept. 3. Tickets can be purchased by going to www.SkagitSpeedway.com or by calling 360-724-3567.