Kinser to Receive Key to Stockton 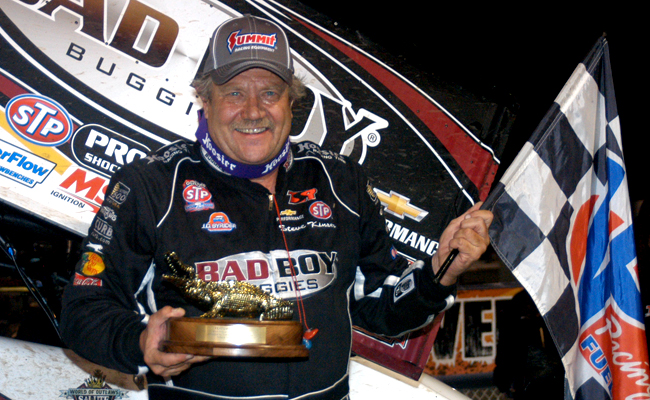 Hall of Fame race car driver Steve Kinser to be presented with Key to the City during ceremony on Thursday, March 20, at City Hall in Stockton, Calif.

STOCKTON, Calif . – The top Sprint Car drivers in the world of auto racing are geared up to invade the Stockton Dirt Track at the San Joaquin County Fairgrounds on Saturday March 22. Just prior to that however, the greatest Sprint Car driver of all-time will be honored at City Hall in Stockton during a special ceremony on Thursday March 20 at 11:30am.

Bloomington, Indiana native Steve Kinser, a 20-time World of Outlaw Sprint Car Series champion and a past starter of the Indianapolis 500 will be presented with a key to the city, in commemoration of his final full-time season of competition. The country’s premier Sprint Car tour in fact, has dubbed this year as a “Salute to the King” in honor of the man known quite simply as the “King of the Outlaws.”

Media members are invited to attend and cover the special ceremony on March 20.

Stockton Mayor Anthony Silva said, “I am very excited about these events coming to Stockton. We do have positive events in our City and we definitely need to support them. Please help promote these great events in March.”

“This is a really exciting event for the city of Stockton and what we’re trying to do more & more is showcase just how large motorsports is in the town,” said Tony Noceti of the Stockton Dirt Track. “When it comes to Sprint Car racing across the world there is nobody bigger than Steve Kinser, so awarding him with the key to the city on March 20 at City Hall is going to be pretty special. We are looking to have as much media as possible come cover the presentation and showcase some of the great things we’re doing down here in Stockton.”

As noted Kinser is considered to be the greatest Sprint Car driver of all-time and possesses the most World of Outlaws STP Sprint Car Series championships in the history of the tour, having claimed the title on 20 occasions. The Indiana driver is the all-time winningest competitor in World of Outlaws history with 576 career triumphs with the series.

Kinser has captured all of Sprint Car racing’s biggest events, including 12 titles at the prestigious Knoxville Nationals in Iowa and 12 victories at California’s biggest showcase – the Gold Cup Race of Champions in Chico. He also finished 14th in the 1997 Indianapolis 500 & even had a stint in the NASCAR Cup Series during his storied career. Kinser is a fourteen-time National 410 Sprint Car Driver of the Year and a nineteen-time American Auto Racing Writers & Broadcasters Association All-American honoree.

Kinser also happens to drive a race car owned by three-time NASCAR Sprint Cup Series champion Tony Stewart, who said: “I never missed a World of Outlaw show in the area when I was growing up. We waited for those nights like they were holidays. A few years ago, when we had the chance to get Steve Kinser to drive for Tony Stewart Racing, it was like a dream come true. When we got him on board, my goal was for him to drive for us during the remainder of his career. I’m really excited for him to go out and have a great season. He’s the best ever and I couldn’t be more proud.”

The public is also welcome to come and attend the ceremony to witness Kinser be presented with the key to the city.

The World of Outlaws STP Sprint Car Series event at the Stockton Dirt Track on March 22 is part of a two-night open wheel event, which includes Winged 360 Sprint Cars & BCRA Midgets on Friday March 21. A car show and live band will also be featured on Saturday afternoon at the track. Tickets for both nights can be acquired by logging onto http://dirtcar.ticketforce.com/ordertickets.asp?p=447 or by calling (877) 395-8606.

The Stockton Dirt Track is a lightning fast 3/8 mile clay oval and is located on the San Joaquin County Fairgrounds in Stockton, California. It is built on the inside of the one-mile horse track and boasts one of the nicest dirt track racing facilities in the state. Information can be found online at www.stocktondirttrack.com