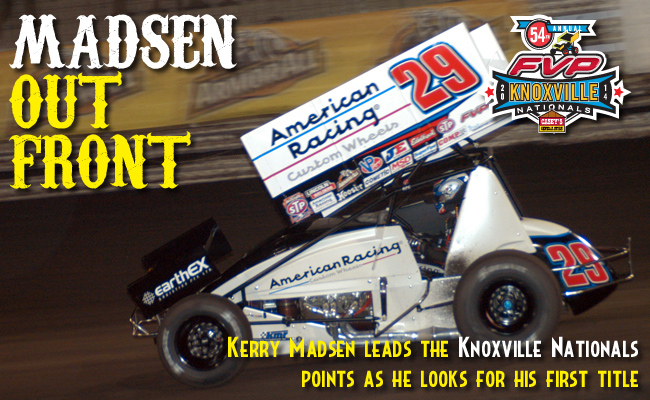 Leads the points heading into the second qualifier night

KNOXVILLE, Iowa — Aug. 8, 2014 — Kerry Madsen has seen his share of success this season scoring World of Outlaws STP Sprint Car Series wins at two of the biggest events on the schedule – the Kings Royal and the Ironman 55.

With those two wins under his belt, Madsen and his American Racing Custom Wheels team has its sights set on another title, one that has eluded the former Knoxville Raceway track champion and Knoxville, Iowa, resident in his career, the legendary Knoxville Nationals.

The track has featured prominently into Madsen’s career over the years – he scored his first victory at Knoxville in 1998 and became a track champion in 2005.

Madsen said the laps he and crew chief Tyler Swank have at Knoxville helps as they prepare to take on Saturday’s feature. They also bring the confidence of a season that includes five victories, 31 top-five finishes and five quick times.

“I think it helps because we’ve done so well so far, the whole year is not hinged on having a good Knoxville Nationals,” Madsen said. “You are comfortable that every time you get out, the car is going to be fast and if something goes wrong or doesn’t go well, it’s not the end of the world.”

Still, Madsen hedged. “You’re still apprehensive because it is the Nationals and you know how hard it is.”

Madsen credits his success this season to crew chief Tyler Swank, who took over the American Racing Custom Wheels team before the start of the year, and the three and half years of work that has gone into building Keneric Racing.

“It’s been the culmination… each year we’ve gotten better as an organization,” Madsen said. “And the second part is that Tyler Swank has given me exceptional racecars. We’re not worried about winning every race, we’re just happy with good finishes. It’s been a blast.”

“I’m looking forward to getting out there and seeing what happens.”