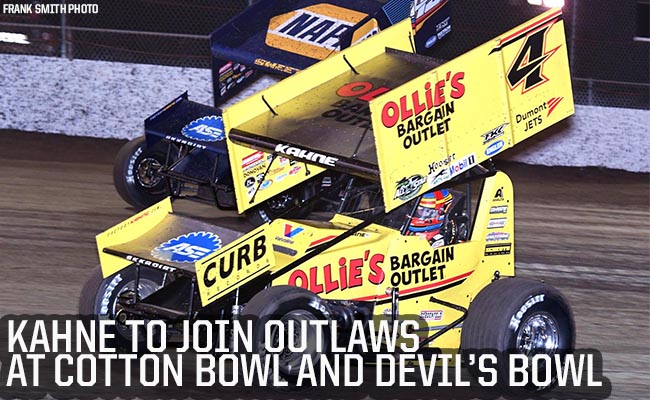 CONCORD, NC – When the World of Outlaws Craftsman Sprint Car Series returns to Texas next weekend, longtime Series supporter and car owner Kasey Kahne will join The Greatest Show on Dirt at Cotton Bowl Speedway in Paige on April 25 and Devil’s Bowl Speedway in Mesquite on April 27 and 28.

Kahne, who has owned a full-time team with the World of Outlaws since 2006, couldn’t be more excited to race with the Series during such a historical weekend. “I’ve always enjoyed having two World of Outlaws teams. To get to race with the teams for three nights and finish up at such a historical weekend at Devil’s Bowl will be a lot of fun,” said Kahne, who will pilot his sharp-looking Ollie’s Bargain Outlet No.4.

“I want to thank Mark Butler and everyone who shops at Ollie’s Bargain Outlet for making this possible. They are expanding to Texas soon, which is great because it’s my favorite store to shop at,” Kahne added.

The Outlaws return to Cotton Bowl Speedway for just the second time in Series history, with Kasey Kahne Racing driver Brad Sweet scoring the victory during the inaugural visit back in 2016. This is the makeup date for the event that was rained out on February 23. Sweet, last year’s runner-up in the Series Point Standings, currently sits fourth in points looking for his first victory of the season. “Anytime you go back to a place where you’ve won before, it gives you a little extra confidence. We have notes from that race, so we are excited to get back there and race. It was an exciting finish last time,” Sweet said.

Following the appearance at Cotton Bowl, the Series returns to its birthplace – Devil’s Bowl Speedway – on April 27 and April 28 for a weekend full of 40th Anniversary activities that includes historical throwback T-shirts, honorary plaques, the annual Ted Johnson Memorial award, and a look back as fans, officials, teams and drivers share their most memorable Outlaw moments as part of a year-long #MyOutlawMoment campaign.

Reserved tickets for the Outlaws invasion of Texas are still available and can be purchased here for Cotton Bowl and here for Devil’s Bowl. As always, if you can’t make it to the track, be sure to watch all the action LIVE on DIRTVision.com!