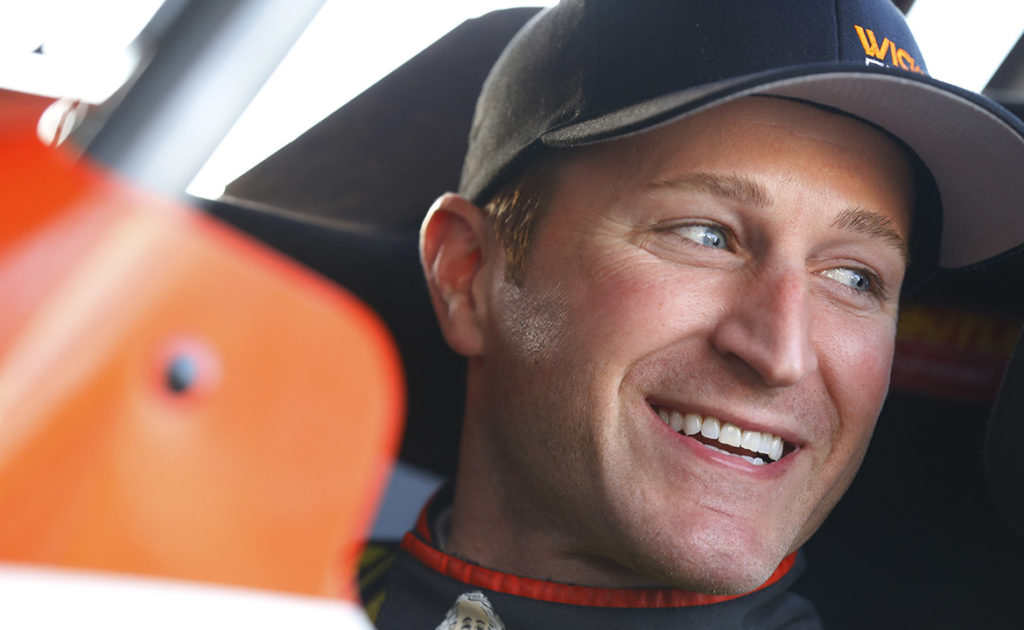 CONCORD, N.C. – Kasey Kahne’s race days have always been a bit noisy. Dozens of crews scurrying around a nearly two-ton Stock Car for days, wrenching and tuning. Hundreds of fans walking through the garage area, determined to get a picture or autograph. Media and cameras at every turn, questioning every detail of the weekend.

Now, that noise has been turned down, but just a bit.

In the pit area of a World of Outlaws NOS Energy Drink Sprint Car event, like the ones this Friday at Silver Dollar Speedway in Chico, Calif., or Saturday at The Stockton (Calif.) Dirt Track, Kahne is surrounded by only a couple of crew members, who tweak on his 1,400 lb. Sprint Car. A few dozen fans meandering up and down the pits — some looking for a quick picture or a handshake. And a handful of media members, the majority just looking to take pictures.

Turning the volume down was not entirely voluntary. It was forced upon him by a health issue that caused him to put an early end to his NASCAR career.

While he was not medically cleared to race again in NASCAR, he’s found a new challenge focusing on racing Sprint Cars – a division he’s loved since a kid.

“It’s like the first thing I really got into at a young age,” Kahne says kneeling next his to orange #9 Sprint Car. “Because I got into it at a young age, and liked it so much, whether I was watching or racing myself, I’ve been hooked.”

Kahne began racing Sprint Cars as a teenager in his home state of Washington. He eventually moved into the USAC ranks, winning a championship in 2000. Then a couple of years later made his move to NASCAR.

A few years into his NASCAR career Kahne formed his own World of Outlaws Sprint Car team, Kasey Kahne Racing (KKR), which helped keep him in touch with the Series — along with running a few races himself.

“I’ve had a blast with all that over the years, whether I was at a NASCAR race watching the DIRTVision part of it or actually traveling and watching the races with the guys,” Kahne says. “I’ve always stayed really close to it and enjoyed it.”

Since its inception in 2005, KKR has amassed one World of Outlaws NOS Energy Drink Sprint Car Series championship — in 2013 with Daryn Pittman — and more than 170 Series wins among several drivers, including last year’s Knoxville Nationals championship with Brad Sweet.

Of the drivers that have won a Series race for the team, Kahne is not one of them. He would like to be.

“When I knew I was done with the NASCAR deal, I thought I would give it a shot (driving Sprint Cars) for a little while, you know, and kind of see how it goes and see if I can’t figure it out and get competitive driving these cars,” Kahne says.

NASCAR was his job. Sprint Cars… well, Kahne says he doesn’t really know what it is right now.

“I hope that I actually feel like it’s a bit of a job,” Kahne says, following up with a joke that racing is never really a job.

But he wants to work at it.

“I want to feel like I’m working at it to make it work and do the things I want and then when we do have success it’ll feel that much better,” Kahne says. “I want to put the time in. I want to put the effort in. No matter what it is, to try and have that success. Doing that is definitely a little bit of work.”

He knows he has a bit of homework to do, too.

Kahne didn’t qualifying for the season opening race at Volusia Speedway Park and has cracked the top-15 twice so far this season.

“I didn’t feel that my performance was good at all (at Volusia),” Kahne says. “I thought the track was really tough… It was slick and it was greasy all in the same corner. Around the whole track just about. It was tough to learn and figure out.”

None of it had to do with his health, and he doesn’t expect it to ever be an issue with Sprint Car racing. Kahne says his issue is driving a car for an hour or two hours straight in humid weather. He would sweat a lot, get dehydrated and cramp up.

He knows the temperature during mid-summer World of Outlaws races can get humid, but he is only in the car for 30 to 40 minutes. He says he felt fine after racing in Florida and expects to the rest of this season.

His issue is seat time.

When he first started in NASCAR, Kahne regularly made time to race Sprint Cars, but over time put more focus on his Cup Series car. Leaving less time for Sprint Cars.

“I feel like now is by far the most difficult time I’ve had learning Sprint Cars,” Kahne says. “I’ve been so focused on the other style and it’s so much different than this (Sprint Car racing). The feel side of it I’m lacking a little bit and have to do a better job with my feet and my hands in different situations. And I think that’s all just laps. Once I figure that out, I’ll feel a lot more comfortable night in and night out.”

His teammate, and last year’s runner-up in Series points, Brad Sweet understands Kahne’s struggles well, having raced in NASCAR for three seasons then transitioning to the World of Outlaws full-time.

Sweet is happy to see his car owner racing with the Series though, citing Kahne’s deep passion for the sport and love for driving the cars.

Kahne has scheduled more than 50 Sprint Car races – 44 of which, so far, are World of Outlaws races – for himself this year, but says he could easily add more, bringing his schedule to about 70 races. Kahne says he chose that schedule to ease into Sprint Car racing this year, giving himself time to formulate what he wants to do in 2020.

There’s not one race he’s looking forward to more than the other. He’s eager for them all. When the Texas races rained out in late February, Kahne says he was ready to race in the rain.

“I don’t like racing in the rain, mud, and all that, but I was like let’s do it, I’ll race,” Kahne says, grinning ear to ear.

In the quiet pit area, kneeling next to his car with a couple of crew guys leisurely working around it, Kahne says he knows the new atmosphere and traveling schedule will be a big adjustment.

“It’s a different type of pressure,” Kahne says. “There’s so many differences to it. I’m not doing normal things each week I would normally be doing the last 15, 17 years. Everything is different week to week, day to day for what it’s been in the past.”

While 50 races are close to half of the World of Outlaws schedule, it’s about a quarter longer than NASCAR’s. There are weekday races, and doubleheader weekend races – sometimes at two different tracks, and sometimes in two different states.

Instead of large team debriefs, it’s now just he and a few crew guys. Instead of hundreds of fans, a handful walk by on a race night, some just looking for a quick picture or handshake. And the media mostly is photographers looking for a picture.

“So, it’s a much different day to day than what I’ve done for a long time,” Kahne says. “I think as we go, I’ll get more and more use to this and just really, really enjoy it.”

To see Kahne take on the Outlaws this weekend (or any of the events on his schedule below), go to WorldofOutlaws.com/tix, or call 844-DIRT-TIX to reserve your seat.