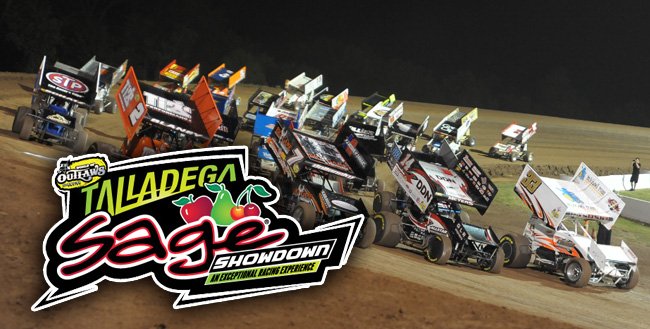 CONCORD, N.C. – Sept. 20, 2011 – It’s no secret Kasey Kahne has a passion for Sprint Car racing. Now the NASCAR driver is donning his promoter’s cap for the World of Outlaws Sprint Car Series “Talladega Sage Fruit Showdown” on Saturday, Oct. 22, at the Talladega Short Track in Eastaboga, Ala., near Talladega Superspeedway.

“I’m excited to bring the World of Outlaws back to Talladega for the first time in almost 10 years,” said Kahne, who has competed with the Outlaws four times this season and fields the #9 Red Bull Maxim and the #91 Great Clips Maxim on the circuit. “It’s going to be an action-packed night, for sure, and I’m looking forward to bringing Sage Fruit from Washington to Alabama during one of racing’s biggest weekends of the year.”

The Talladega Sage Fruit Showdown, the final event before the World Finals in Charlotte, will play a crucial part in the race to the World of Outlaws Sprint Car Series championship. Jason Meyers is attempting to win his second consecutive title, but legendary racer Steve Kinser, who drives Tony Stewart’s Bass Pro Shops Maxim, is coming off his ninth victory of the season and is looking for his 21st World of Outlaws championship.

The Talladega Short Track is a high-banked 1/3-mile oval where the Outlaws last competed in 2004 when Jason Meyers took the checkers. Andy Hillenburg, Steve Kinser, Mark Kinser and Danny Lasoski have also earned vitories at the venue. Randy Hannagan owns the track record, turning a lap in 10.998 seconds on April 20, 2001.

The weekend at Talladega Short Track runs in conjunction with the NASCAR weekend at Talladega Superspeedway. Beginning Friday, Oct. 21, Kahne will compete in a match race against several racers, including the storied Red Farmer. Then, on Oct. 22, the World of Outlaws gear up for the Talladega Sage Fruit Showdown, which also will include Dirt Late Models.

Tickets for the Talladega Sage Fruit Showdown are $35 in general admission and $40 in the pits, available only on race day. For more on the World of Outlaws, click WorldofOutlaws.com or call 877-395-8606, for more on Kasey Kahne clickKaseyKahne.com and for more on Talladega click TalladegaShortTrack.com.

About Sage Fruit Company
Our goal at Sage is to provide “An Exceptional Eating Experience” by forming mutually beneficial relationships with our customers. Sage is owned by growers who grow Apples, Pears, Cherries, and various soft fruit in the heart of apple country in the Pacific Northwest. www.sagefruit.com