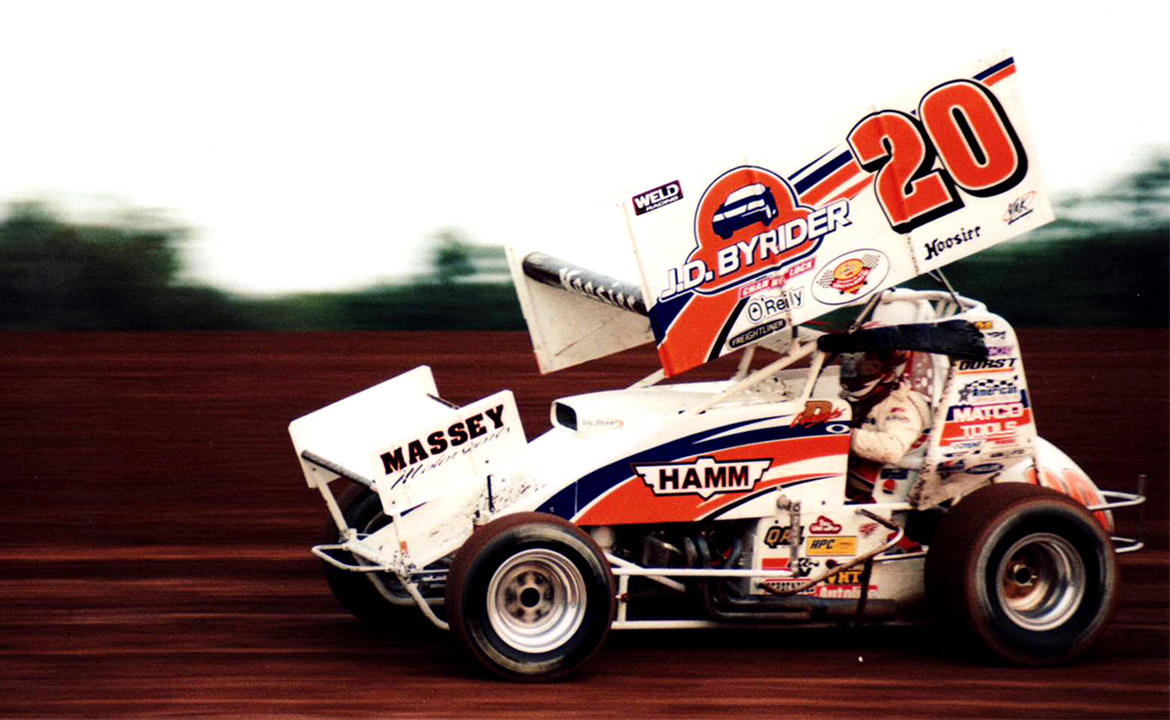 Chris Dolack
World of Outlaws champion looks back on career to help foster Mason Daniel’s racing
By Nick Graziano | May 1, 2020 at 4:12 pm

That gratitude inspired Lasoski. The 2001 Series champion and 122-time Series winner knew when he retired from Sprint Car racing he wanted to do the same for another young up and coming driver.

Then entered Springville, CA’s Mason Daniel. Lasoski was still racing at the time when he met the teenager and not yet ready to retire. However, he saw Daniel’s passion for wanting to be a World of Outlaws Sprint Car driver. It was the same passion he had when he was younger.

“Every driver, they’re not going to plan their retirement,” said Lasoski, who will be featured Saturday night during the DIRTVision Watch Party. “It just seemed to happen. At this stage, to run with the Outlaws, you have to have every single duck in a row and every single aspect covered.

“It just so happened I got introduced to the Daniel family and the second that I met them, I thought this is what I wanted to do. At the time I wasn’t ready to retire, yet. But now I think it’s the best thing I’ve ever done because now I have the fire back to win again and we have all of the resources to get it done. Now it’s up to me to get this get this kid going and get our whole team better.” 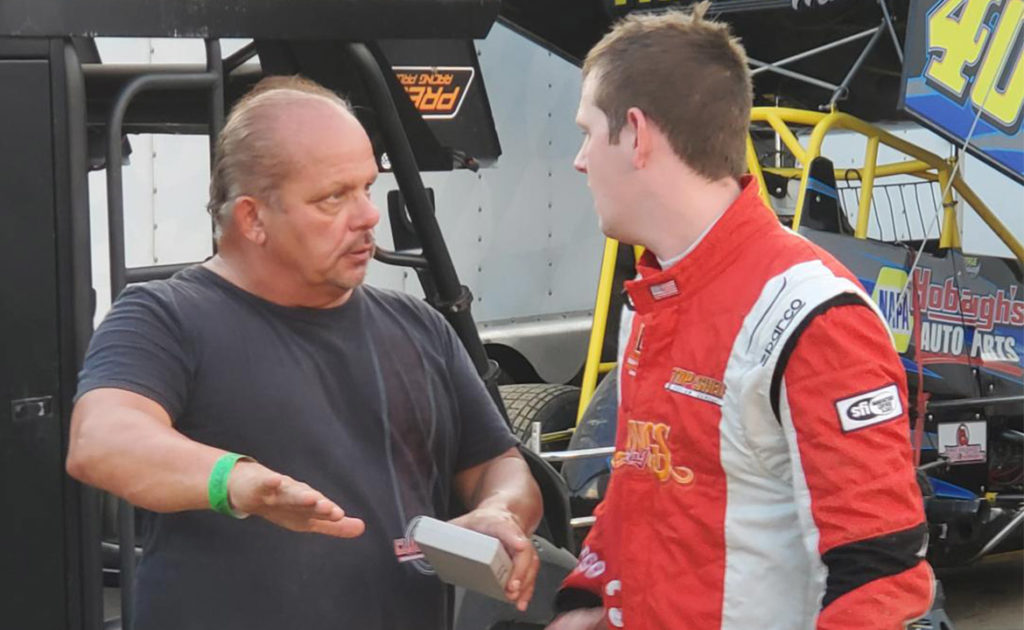 Daniel, who only has about three years of Sprint Car racing under his belt, is running his rookie season with the World of Outlaws Sprint Cars this year. Lasoski is at the helm of Daniel’s team as crew chief and mentor, trying to use his years of experience to shorten his learning curve.

(RELATED: On Saturday at 7 p.m. (ET), DIRTVision will air the Sprint Car #DVWatchParty presented by NOS Energy Drink, featuring the June 19, 1999 race at Heartland Park in Topeka, KS with commentary from Lasoski and NHRA Funny Car champion Ron Capps, and the May 24, 2006 race at the Dirt Track at Charlotte – Kevin Swindell’s first World of Outlaws win – with commentary from Swindell and Roger Slack.)

Lasoski, “The Dude” of Dover, MO, ran his first race with the World of Outlaws in 1983 and his last in 2017 – making more than 1,200 starts. In that time span he won four Knoxville Nationals, was inducted into the National Sprint Car Hall of Fame in 2011 and drove for some of the Series top team owners like Casey Luna, Dennis Roth and Tony Stewart.

He won the Series championship and his second Knoxville Nationals victory in his first year with Tony Stewart’s team in 2001.

“Tony was not only my car owner, but he was my buddy,” Lasoski said. “When we started his whole Tony Stewart Racing back in the day. We were traveling together… He grew up like I did. I had my helmet bag and my seat and that’s all we had. We’ve both slept on people’s floors. We’ve both slept in the back on a car to race. He was basically trying to help me out to start a racing career with having my own team and controlling my own destiny. The proof is there. We won a lot of races together.”

Fabled crew chief Jimmy Carr was at the helm of Lasoski’s car at TSR. Like Lasoski and Stewart’s relationship, the two were friends, but they were also perfectly synced in knowing what the car needed.

Using what he learned from Stewart and Carr and other owner and crew members he’s worked with, Lasoski is trying to establish a similar relationship with Daniel. Several of the tracks Daniel will be racing at and the drivers he’ll be racing around on the World of Outlaws tour, Lasoski already has experience with.

He knows how certain drivers drive and how tracks will change. With Daniel only having 12 World of Outlaws starts, so far, Lasoski tries to paint a picture for Daniel before every race of what he can expect.

“Every place you go is so different,” Lasoski said about the World of Outlaws tour. “No matter if we go to Knoxville or Eldora or Williams Grove, there’s immediately things that go through my head about each racetrack. ‘Oh, I felt this at this time. We need to pay attention to this. This may happen to you.’ Everywhere we go, we discuss it when we go there of everything that’s happened to me in the past.”

So far this year, due to the COVID-19, the World of Outlaws Sprint Cars have only had the opportunity to race the DIRTcar Nationals triple-header at Volusia Speedway Park in February. There, Daniel finished 15th in the first event – tying his career best finish – didn’t qualify for the second and finished 23rd in the final race.

The half-mile Florida track is one of Lasoski’s favorites, he said. He was able to tell Daniel what would happen throughout the night and when. When Daniel got out of the car, he relayed to Lasoski exactly what he told him would happen. That advice has been most helpful, so far, Daniel said.

“He’s always helpful when we go to a new track no matter where it is,” he said. “Just kind of looks at you and goes, ‘Alright, the car’s going to roll around the track, just hold it wide open.’ Just taking advice from him any time you show up somewhere new.”

The World of Outlaws Sprint Cars will return to racing on May 8 for a team and participant invite-only event at Knoxville Raceway — a track where they’ve both had success.

Along with his Knoxville Nationals wins, Lasoski is an 11-time track champion at the iconic raceway and has the most Feature wins in a 410 Sprint Car there with 112 wins. Daniel won a 360 Sprint Car race at the track in 2018.

However, it doesn’t matter what track they go to, Lasoski said their goals always remain the same. Consistently make races. Then consistently work on top-10 finishes and then top-five finishes. Then wins will come.

“When we started, we crawled,” Lasoski said. “He (Daniel) ran 360 (Sprint Cars) and he’s really came a long way in a short period of time. But we still have a lot of work to do. He’s open minded enough to say, ‘We’re going to do this as long as it takes. We’re going to take our ass whippings and keep going.’ That goes hand in hand the way I was brought up. You’re going to get your tail kicked. You just keep coming back harder because that’s what’s going to make for a good season. If you keep that mentality, the sky is the limit. You keep fighting and digging and it’ll come true for you.”

Like Stewart did for him, Lasoski hopes help Daniel throughout his racing career and one day claim a championship.