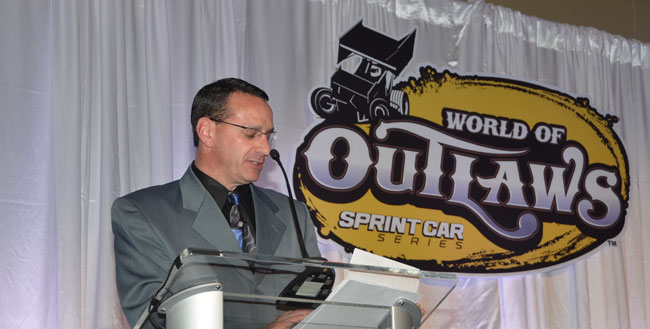 Gibson Honored with Outstanding Contribution to the Sport Award

Gibson, who has worked for the premier sprint car series since 1995 and been the series announcer since 1997, attended his 1,500th consecutive World of Outlaws STP Sprint Car Series race. Take note, that’s not 1,500 overall; it’s 1,500 straight events that Gibson has seen.

This past weekend, the North American Sprint Car Poll recognized Gibson’s tireless efforts by honoring him with the 2012 Outstanding Contribution to the Sport Award, which is the highest honor as voted by industry insiders.

“I’m very honored that there are people in the sport that feel I’ve actually had something to offer,” Gibson said. “It’s really unbelievable to me that I could get to this point from being just a race fan because that’s really all I am. I just get to talk about it.”

“For Johnny Gibson to earn this award, it speaks to the level of respect that people in our entire industry, nationwide, have for him and his work with the Outlaws,” National Sprint Car Museum executive director Bob Baker said in a statement. “Carlton Reimers, who first handed a microphone to the program-selling western Pennsylvanian in 1995, should feel very proud, as would Carlton’s father-in-law and founder of the WoO sprint car tour, the late Ted Johnson, if he were still with us.”

From being a fan to selling programs at the events, Gibson turned his passion of sprint cars into a career by delivering his signature calls from the time the opportunity was given to him more than 15 years ago.

“Johnny has been our connection to the fans for so many years, and his dedication to the World of Outlaws and sprint car racing is unquestioned,” World Racing Group CEO Brian Carter said. “It’s only fitting he should be in the company as such legends of the sport, and we’re excited for him to be recognized with this well-deserved honor.”