From Race Suit to Race Team 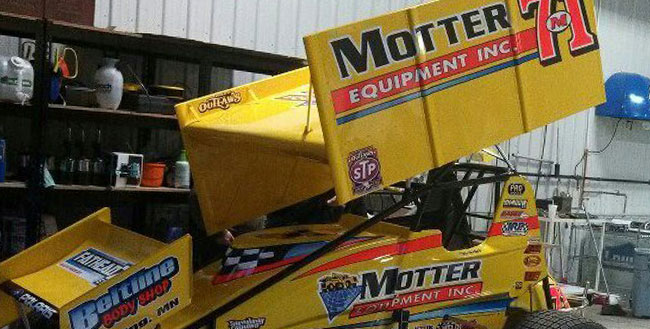 BARBERVILLE, Fla. — Jan. 30, 2013 — It was in the pits at the scenic Deer Creek Speedway last September when Joey Saldana began a conversation with opportunity.

It was a chance discussion between a former World of Outlaws STP Sprint Car Series car owner, Dan Motter, and one of the series’ stars. What started with Motter – the president of Motter Equipment Inc. who owned, drove and crewed on various racing teams in the 1970s, 1980s and 1990s – agreeing to get Saldana a racing suit for his offseason trip to compete in Australia turned into something much more significant.

Flash forward several weeks as Saldana began to wrap up 2012 by garnering his sixth top-four finish in the last seven seasons on the circuit. Saldana was informed of his release from Kasey Kahne Racing effective at the end of the season.

“You have to be at the right place at the right time,” Saldana said. “Luckily I had that conversation with Dan about helping me out in Australia. When he heard I got released he was right there to step up and build a team to run for an Outlaws championship.”

It’s quite the jump from race suit to race team, but Motter went in head first. With a new truck, a trailer, five engines and six cars, Motter Motorsports was built in Minnesota, but will soon be based out of Saldana’s hometown of Brownsburg, Ind.

“I definitely have a lot that I want to accomplish in sprint car racing,” Saldana said. “I didn’t want my last job to be my last job. I was very fortunate to have Dan Motter step up and provide me a team that can compete at a high level. I just want to prove to him and everybody else that I deserve to be out there racing with the World of Outlaws and hopefully we can succeed.”

And what better place to start the new partnership than the fast half mile where Saldana has seven top-five finishes and 11 top 10s in 14 races during World of Outlaws STP Sprint Car Series competition since 2008. He also claimed the UNOH DIRTcar Nationals Presented by Summit title in 2010 and 2011.

“You want to start the season out well and that can definitely lay the ground work for the season to come,” he said. “If you start off strong it can flow over into the rest of the season. It seems like if you start off good at Volusia you seem like you can kinda carry it on throughout the season.”