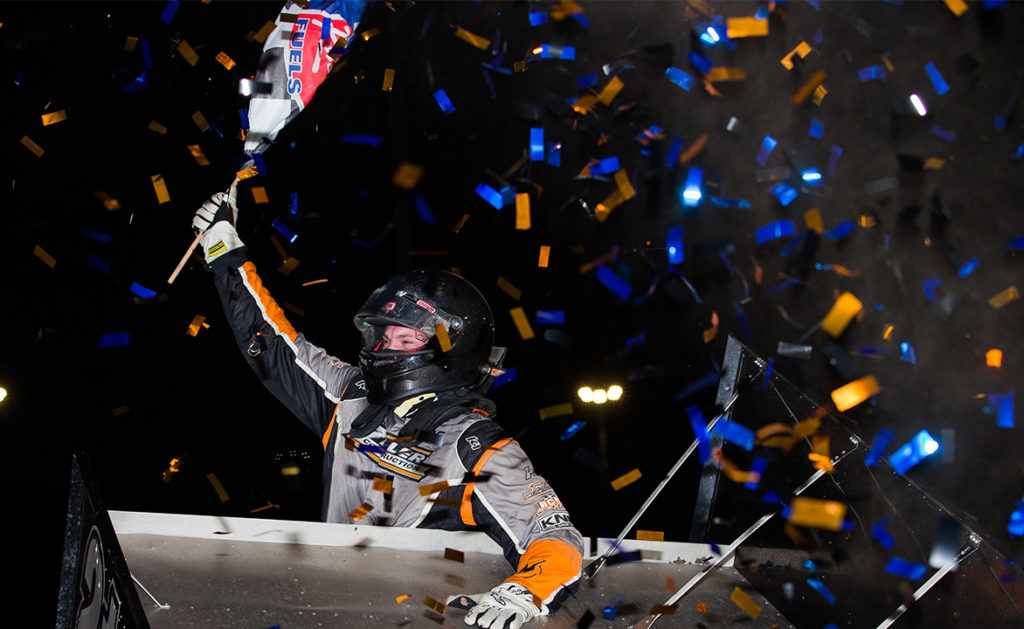 Carson Short held up the checkered flag as high as he could. Confetti rained around him. The crowd of 2,000 people sounded like 20,000 with their empathic cheers echoing around the speedway.

If you asked Short, he just won the Knoxville Nationals. Or at least that’s what it felt like to the Marion, IL driver.

“It feels great,” Short said getting his first Series win. “Especially here. It’s where I won my first USAC race, too. It’s a great track. Everyone says it’s a different track. It’s technical. I felt like tonight was up top, running the cushion. It just feels great.”

Short led all 30 laps to claim the win in his 11th World of Outlaws start, driving for his grandfather, Richard Short’s small underfunded team. He also became the first first-time winner in more than a year for the Series.

Before the night, Short had two top-10 finishes with the Series – the first coming at Tri-State Speedway. While he only has a handful of starts in a winged Sprint Car, he has several laps around the quarter-mile track. With it being about an hour and a half from his Illinois home, Tri-State became a home track for Short. And the fans treated him as a hometown driver all night long.

“You don’t get any better than the fans here at Haubstadt,” Short said. “They’re just down home ready to watch some Sprint Car racing. They love it. It’s just the atmosphere. Winning at Haubstadt, I feel like it’s the small track of the Knoxville Nationals, if you will, with the fans. Those guys are crazy.”

Short earned the pole position for the 30-lap Feature with his win in the DIRTVision Fast Pass Dash. He took the lead from Haudenschild on the first lap and never looked back.

The same happened at the start of the Feature. However, Haudenschild didn’t let Short get away.

On Lap 7, Short got sideways off Turn 2, allowing Haudenschild to plan an attack to pass for the next turn. Before he could, Jeff Swindell flipped in Turn 2, bringing out the red flag.

When the race resumed, Short maintained about a two-car length distance on the NOS Energy Drink #17 car. Even when he had to wrangle his way through lap traffic, Short looked like a veteran slicing through traffic with ease.

With five laps to go, Haudenschild threw a Hail Mary slide job underneath Short’s #21 car going into Turn 3. He took the lead, but Short was able to cross underneath him and bolt back ahead of him down the straightaway. From then on, Haudenschild couldn’t get close enough again to attempt another slider. He had to settle for the runner-up finish.

“We’ve been really good here. Just keep this momentum rolling. I keep telling my guys, if we keep being in this top-five we’re going to win races. We’re just working for that.”

His second-place finish was his second in a row at the track and his sixth top-five finish in the last seven races, which helped move him up to fourth in the championship standings – 124 points behind leader Brad Sweet.

David Gravel, of Watertown, CT, rounded out the podium. His third-place finish is a welcomed rebound from his 19th-place finish at Knoxville Raceway last weekend.

Behind him in fourth was Carson Macedo, of Lemoore, CA – his third fourth-place finish in a row.

Sweet swept the weekend at Beaver Dam Raceway and then the next weekend at Knoxville Raceway was swept by Kyle Larson.

Will Short be next in line to sweep the World of Outlaws’ first doubleheader weekend at Tri-State Speedway during the live broadcast on CBS Sports Network Saturday night?

“God, I hope so,” Short said with a chuckle and smile on his face. “Yeah, the car is on rails. I don’t think the track is going to change any. It (the #21 car) would go anywhere I wanted it to go. Even when (Haudenschild) showed me the nose with his slide job, I could cross underneath. It just had speed everywhere. Yeah, I feel like we can back it up tomorrow night and get another win.”

The World of Outlaws NOS Energy Drink Sprint Car Series returns to Tri-State Speedway Sat., June 20 for the second night of the historic weekend. The Feature will be live on CBS Sports Network – the first time the World of Outlaws has been live on national television since 2012 – at 9 p.m. (ET). The entire event will be broadcasted live on DIRTVision, as well.