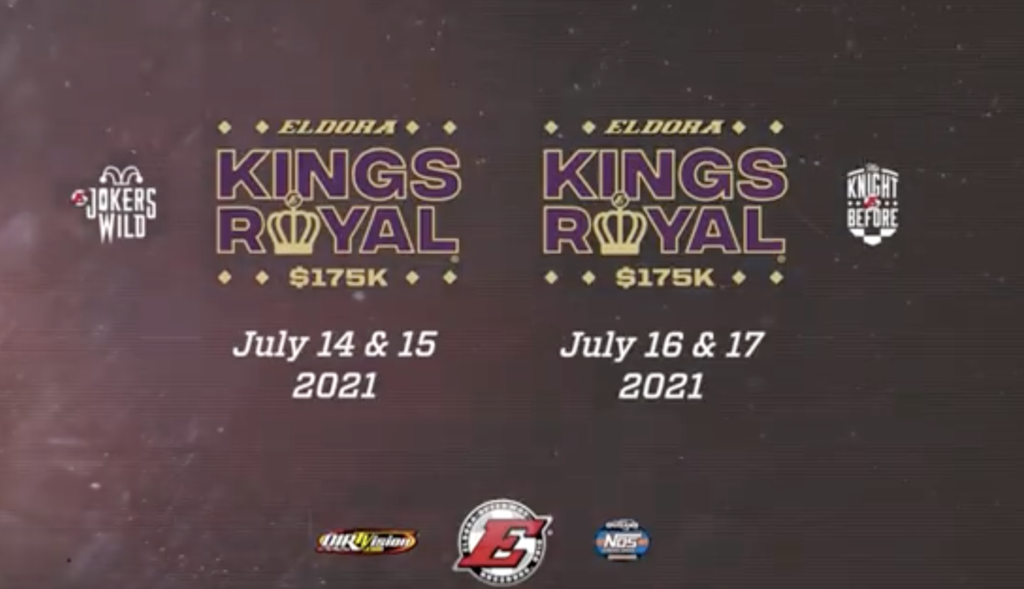 World of Outlaws and Eldora Speedway officials — following up on the declaration they were doubling-down in 2021  — have announced the legendary high-banked .500-mile clay oval will host two Kings Royals in July.

The events are a part of a blockbuster four-day event offering the superstars of the World of Outlaws NOS Energy Drink Sprint Car Series two opportunities at a winner’s purse of $175,000-to-win. The first coming on Thursday, July 15 and the second on Saturday, July 17.

As a result of the loss of Eldora’s complete 2020 spectator event season, speedway officials reshuffled the hand they were dealt to create the formidable 2021 Kings Royal Week.

The 38th running of the Kings Royal, the only event of the week that was scheduled to be part of the 2021 event, will be held Thursday night, July 15 and offer the first epic $175,000-to-win bounty.

The traditional Friday “Knight Before the Kings Royal” preliminary event has been rescheduled from 2020 to Friday night, July 16, 2021, and the night’s winner will take home the $10,000 prize.

The 37th Kings Royal has been rescheduled to Saturday, July 17, and will be the second marquee event of the week to pay $175,000 to the winner.

The announcement also marks the beginning of a new multi-year sanction agreement for the Kings Royal between Eldora Speedway and World Racing Group, the parent company of the World of Outlaws, DIRTcar Racing, and DIRTVision.

In addition to July’s Kings Royal Week, the World of Outlaws NOS Energy Drink Sprint Cars and the USAC AMSOIL National Sprint Car Series will again share the spotlight on Friday and Saturday, May 7 and 8 at the #LetsRaceTwo Doubleheader Weekend.

The Outlaws will make their final Eldora appearance of 2021 on Friday, September 24 at the opening night of the 4-Crown Nationals Weekend. The BeFour The Crowns Showdown will feature full programs for the World of Outlaws, the USAC NOS Energy Drink National Midget Championship, and qualifying for the USAC Silver Crown Champ Cars.

The Kings Royal from Eldora, and all World of Outlaws events, are livestreamed exclusively on DIRTVision.com

The customer service team from the Eldora Speedway box office will be reaching out directly to those patron accounts making the original purchase of tickets, campsites and/or pit passes for the 2020 Kings Royal with details on the 2021 Kings Royal Week prior to tickets and campsites resuming public sale.