It was their last year without wings. Four decades ago, the 1981 World of Outlaws season was 102 days and nights on 45 plots of dirt in 20 North American states and provinces. It was the first to crown a champion other than Steve Kinser. To dethrone “The King” after three years demanded diversity from Sammy Swindell beneath wings measuring 6×8 in California, 5×5 in Iowa and 16 square feet in Pennsylvania. And when sparkling his Nance Speed Equipment reached Texas or Colorado, wings stood idle for what purists call Traditional Sprint Car races.

Outlaws enforced no laws regarding engines, tires, fuel or weight in 1981: final year of the unchained “Run What You Brung” era. When the host arena raced without wings, so too did The Outlaws. Taking their tops off was nothing new to Swindell, Kinser or Doug Wolfgang because each had schooled that way. Each could “back it in” on the right rear tire (Firestone dominance challenged by Sammy’s Goodyears and Steve’s Hoosiers) as well as wind resistance helped plant left rears. The superiority of the three-headed hydra was a foregone conclusion everywhere except Pennsylvania, until 1981 when nine straight victories by Steve Kinser demanded that even the “PA Posse” face reality.

Kinser, Swindell and Wolfgang were never more dominant than in 1981 when they topped 74 of 82 finals. The grueling season started 63 cars strong at the Florida Winter Nationals and Texas Spring Nationals that drew 56 teams. Only the Knoxville Nationals (86 cars) and Chico’s first Gold Cup (72 cars) would fill more stalls. East Bay exemplified the shifting sands by offering one week without wings followed by one week with them. Houston and Dallas led to Oklahoma City, Little Rock and West Memphis up I-55 to St. Louis (Tri-City) west to Kansas City, north to Knoxville into Illinois and Indiana then southwest to Wichita and Tulsa. Teams had 48 hours to cover 670 miles between Lakeside and Butler (MI) Motor Speedway. Two nights at Knoxville were with wings and without.

June opened with Kinser’s two-week blitz of Pennsylvania and New York. Ponder that for one moment: nine races on eight tracks over Hall of Fame heroes Bobby Allen, Rick Ferkel, Keith Kauffman, Jan Opperman, Lynn Paxton, Danny Smith, Steve Smith, Smokey Snellbaker, Jeff Swindell and Kramer Williamson. Outlaws had one week to stock parts for seven races in nine sweltering evenings in Texas, Oklahoma, and Kansas. Chicago’s Santa Fe to Fairmont, MN was the longest overnight pull at 450 miles to exceed the 326 miles between Cincinnati (Lawrenceburg, IN) and East St. Louis. Fargo’s first visit led into Manitoba and 1,100 miles to Denver two days later. Eagle’s initial event led to Missouri State Fairground and three-night Eldora Nationals then 568 miles overnight to the Jerry Weld Memorial at I-70. After the last natural Nationals, the tour ricocheted through Indiana, Illinois, and Ohio before cramming California into two weeks. Transporters had five days and 1,800 miles between Chico and Odessa, MO followed by 1,100 miles to New York State Fairgrounds. The 1981 World of Outlaws season culminated like the first three: Ten Grand to win at Eldora Speedway on Sunday afternoon.

Swindell’s first championship came in his first full season aboard Nance Speed Equipment from Wichita, KS. Sam’s previous Outlaw efforts relied on Racing Head Services, a Memphis engine builder steeped in drag racing. RHS units in Federal Express Stantons snapped as many crankshafts as track records and annually forced Sammy home. Reliability was no issue in 1981 because Laverne Nance dialed Earl Gaerte’s rotary phone. Gaerte Engines were Karl Kinser’s choice. Nance next hired Tommy Sanders as Swindell’s assistant. Tom had trained with Allen and Opperman then toured with Sammy on the 1977 Bobby Davis Electric company. Four years later, they lasted four months until Sanders joined Brad Doty at Bowers Coal. To bust tires, Swindell asked his fiance’s brother Terry Gray, who cited the experience as teaching the fine art of preparation. “Arrive ready,” answered Amy’s brother. “No hurry. No rushin’ around. Unload a car ready to win right out of the box.” By the champ’s shining example that box was a custom-carved Chaparral from Texas that set the industry standard.

Sammy Swindell’s season of 1981 recorded no fewer than 38 victories in 107 starts. He won 28 Outlaw finals, beat six split fields, and strayed from Ted Johnson’s circuit to humble the California Racing Association in their own Ascot Park. Pacific Coast Nationals at Ascot paid $7,500 which was better than Baylands (6k), October in Odessa ($5,500), Gold Cup ($5,000) or the Busch Bash at Eldora for the year’s quick qualifiers. Swindell should have come home to a ticker-tape parade but instead ended the season in a Dallas hospital after snap-rolling Laverne’s 100-inch NCRA champ car.

Steve Kinser’s nine straight wins (actually 10 when counting Macon All Stars) proved he did not meekly surrender the throne. Karl Kinser and Paul Elrod sat Steve in Stanton cars for the first full year that netted 35 wins, of which 23 were Outlaw finals. Steve added three prelims, Syracuse dash for Doug Howells, swept half of the Four Crown at Eldora for Johnny Vance, and hoisted a Halloween checkered at Chula Vista with Stanton’s own car. Most lucrative was the Eldora $10,000. Most damaging was a nasty Knoxville crash without wings that chipped an elbow and caused Kinser to miss four races. Eliminated from contention, Karl and Steve took Ten Grand from Chillicothe and inaugural Sharon Nationals. When the World of Outlaws went to California, Steve flew out to race for Rich and Ron Lovell of Yuba City. Karl reconvened with Steve at the Kansas City airport, quarreled with Ted at I-70 and left the meet in-progress.

“The Wolf” was Swindell’s closest pursuer: 230 points from a title that Doug never did accomplish. To be fair, championships were seldom Wolfgang’s winter goal yet he started each season so strong (five East Bay trophies in five years) that he stuck to each tour until the exhausted engines of Bob Trostle or Doug Howells forced them off the trail. Doug and Doug made a full pull in 1981 that nailed 20 finals and four more over split fields. Trondson Engines of Minnesota were fresh when Wolfgang won the first ever Volusia event, averaged 111.65 MPH to bag Belleville by summer, and 120 MPH to snare the Syracuse Super Nationals that was worth 15 Grand in cash and prizes. 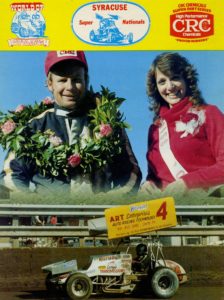 The 1981 World of Outlaws circuit was the fourth for C.K Spurlock, the Nashville concert promoter behind Loretta Lynn and Kenny Rogers. C.K hired Charlie Swartz in 1978, Dub May in ’79 and was in his second season with Danny Smith in ‘81. After testing Trostle and Stanton ideas, Spurlock and Smith launched the Gambler Chassis Company in 1981. The factory’s first car was maintained by Ken Woodruff, an Outlaw winner with Jimmy Boyd, Johnny Anderson and Tim Green. Kenny and Danny started fast by posting prelims at East Bay and Houston plus a Dallas sweep. But then Danny destroyed 4-5 Gamblers and his own health. Freed from the point chase, Gambler glanced at Bert Emick’s new All Star alternative as did Lee Osborne and its first champ, Bobby Allen. Osborne became Bert’s second champ after beating The Outlaws at Santa Fe in 1981.

Allen and Osborne and Karl Kinser were key figures in the evolution to aluminum, titanium, and steel parts of a hundred holes. As cars grew lighter, crashes without wings turned long and lethal. The 1981 Outlaw season was its first scarred by death when Minnesota’s Doug Toepper crashed his wingless sprinter at Knoxville. No one at the 1981 Knoxville Nationals knew it to be the last without wings. But when the final feature began with 2-3 cars in the air and one spectator seriously injured, that decision may have seemed overdue.

Swindell and Kinser were very much in favor of stabilizing lightweight investments with wings. Ted listened. Johnson announced that every 1982 World of Outlaws event would wear wings “for safety sake.”

Knoxville did not acquiesce at first. Ralph Capitani indicated no wings at the 1982 Nationals. Ted threatened to take Steve and Sammy elsewhere. A showdown seemed in store. And then Gary Scott got killed at Knoxville. The popular independent from Holts Summit, MO had scored a stunning upset of 1981 Outlaws at Boone, Iowa. Knoxville immediately adopted wings and never looked back.

There were no wings on the first World of Outlaws logo. But change was in the wind.