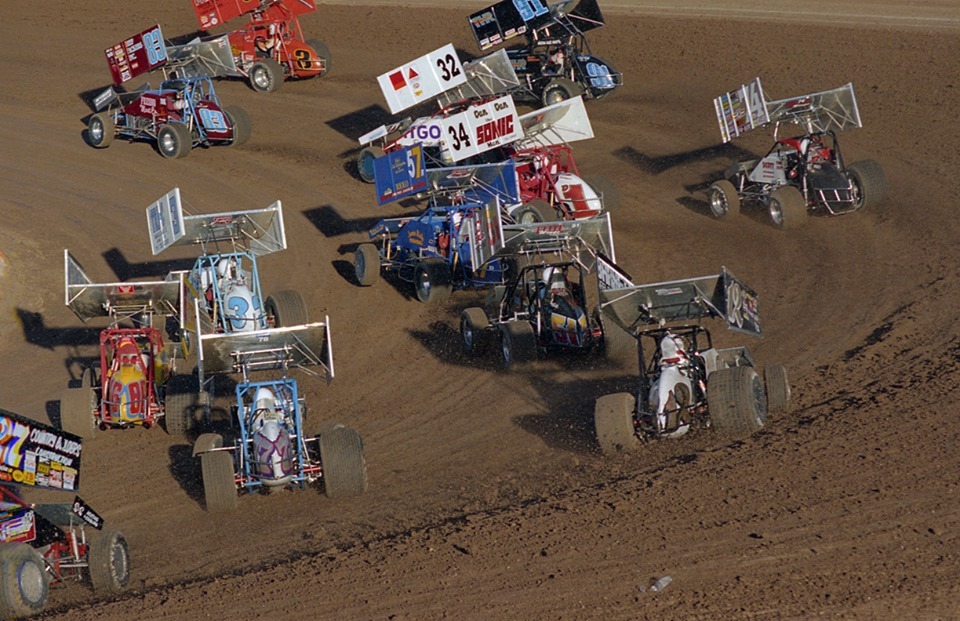 It sounded too good to be true. Ten weeks of World of Outlaws Sprint Cars from legendary Manzanita Speedway during the dead of winter all on live television had to be a pipedream. Yet there it was each Sunday evening on The Nashville Network following football on network TV. Couch potatoes did dance.

The Slick 50 Sprint Car Series aimed to endear fans of country music to “The Greatest Show On Dirt” as envisioned by Pat Patterson, host of TNN Race Day who sold his six-figure idea to an oil additive company, World of Outlaws and Manzanita. As alluded, only an occasion of such gravity could have brought series head Ted Johnson and track boss Keith Hall together because business between them had been contentious. But warm weather options were few. Ascot was two years gone and The Dirt Track at Las Vegas was four years off. Phoenix could hardly have worked better because competitors and TV technicians could fly into Sky Harbor and taxi down Broadway to 35th Avenue if all rental cars were gone, something highly unlikely in a sprawling city of resorts, restaurants, and regal golf courses.

Ted’s terms were fairly simple: Manzanita feature wins would pay his $5200 standard but no points so that no one was forced into the desert. Outlaw officials (plus Workin’ Woody) made programs fit TNN time slots. The World of Outlaws closed its 1992 season in the Devil’s Bowl of Texas two weeks before the Slick 50 began.

America initially heard Jeff Swindell and Dick Berggren as television announcers because somewhere in the thousand miles between Mesquite and Manzanita, Jeff was released by Jack Elden and replaced with Jac Haudenschild after Jac left Casey Luna. Before leaving the booth for one race in the Luna Ford, Jeff called brother Sam’s victory in the Slick 50 opener over Steve Kinser, Haudenschild and Dave Blaney, who was fifth in 1992 points for Verlin Chupp then brought Vivarin to Luna and eventually the entire tour. Patterson phoned Brad Doty and Ralph Shaheen and their voices remain on TV in 2019.

The Slick 50 Series enabled Ken Schrader to play tenth in Jack Yeley’s midget despite promising his wife that such dangerous days in outdoor open wheels were over. Anne Schrader knew only that her husband had gone to race stock cars on Tucson asphalt until she discovered Manzy mud in his laundry. In his defense, Schrader was steadfast in his vow to abstain from the World of Outlaws since May 16, 1984: nine months before Schrader appeared on live CBS-TV as Daytona 500 rookie.

Live television drew some corporate interest to The Outlaws though some sponsors were more regional than hoped. Burger King and McDonald’s did not sponsor Herrera or Steve Ballenger but a few franchises in Nebraska and South Dakota did. Dan Motter of Minnesota signed Century 21 for Jacobs in three races that opened 1993 but when the cameras went cold Motter had to replace the real estate broker with Ecowater.

Slick 50, Patterson, Johnson and Hall were all keen for a second go until Keith raised his price, again thinking his reluctant partners had no viable alternative. He was half right. Patterson found Canyon Speedway some 40 miles north of town. A decade later, Canyon would welcome national acts but in 1993, few knew of the third-mile among the tumbleweeds other than coyotes.

There is little to block the wind around Carefree Highway. Canyon quickly went slick for Slick 50 races, which helped alter the format by qualifying on Saturday night for Sunday’s twilight TV. Canyon and later broadcasts on The Nashville Network and Outdoor Channel fought the same dusty issue. Desire to go live in Eastern Standard Time meant ruining dirt during Western Standard Time. Canyon viewers saw action atypical of the World of Outlaws yet some fine dicing did occur. Canyon offered a completely open canvas for boom cameras to shoot from cool angles.

Canyon was the first time that Fresno cattleman Dennis Roth sent his team out of California to take on The Outlaws. Beef Packers had performed at Calistoga with Lee Brewer and Gold Cup 1993 with Todd Ventura, who shifted to the team facilitator role he occupies today. Todd’s first act shipped Brent Kaeding to Canyon. Almost three decades later, Roth remains a pivotal player by topping the 2019 Gold Cup with Daryn Pittman.

Canyon continued the revolving door of Strange Performance pilots. Gil Sonner wrapped at Devil’s Bowl with McCarl then selected Sills and Kauffman for Canyon before trying The Dude. Good things happened. Lasoski went right to the front and did not leave for 18 months, winning 37 times including five of World of Outlaws status. They were halfway into 1995 rookie campaign when The Dude took his pistols to Al Hamilton’s camp. Gilly and son Donnie Sonner finished that tour with Kauffman, hired Herrera for three years, and provided Pittman’s rookie ride in 1999.

Week III from Canyon was coronation for Fred Rahmer, who had never beaten The Outlaws before that day. Rahmer’s victory was a total PA Posse performance with Gambler owned by York car dealer Bob Stewart, powered by Ed Stauffer and wrenched by Ed’s son Lee. It took five more years to win an Outlaw point race. Rahmer did accumulate eleven as driver and four more as car owner to Stevie Smith and son Freddie. Apple Chevrolet of Stewart and Stauffer added eight Outlaw wins with Hodnett and Jeff Shepard.

Steve Kinser won two straight before Christmas 1993. Jeff Swindell swept his third on the third of January 1994. Week Seven presented a dilemma when Kinser insisted on competing against Arizona sprint cars and Oklahoma midgets. The solution saw The King cross third on Thursday, fly to Phoenix to qualify Karl Kinser Maxim on Saturday then back to Tulsa for third again aboard Ralph Potter’s midget after 50 laps of Chili Bowl then back to Canyon to cop a cool 5200.

After five seasons and 148 feature wins, Sammy Swindell and Harrold Annett made another stab at NASCAR in 1993 but it ended after Darlington, Dover and IRP. Sam made a few scattered Outlaw starts then struck a TV deal with Oklahoma livestock broker Jeff Gilliam on Ken Jenkins chassis sponsored by Bull & Hannah Meat Snacks. Sammy promptly parked the package in victory lane.

Pat Patterson played a brief but vital role in the World of Outlaws despite none of his 19 events officially appearing on their schedule. Live telecasts from Knoxville Nationals, Kings Royal, Williams Grove, Devil’s Bowl, Las Vegas, Houston, Fort Worth, Fargo, Topeka, Charlotte and Bristol became common. But it was Patterson who brought the concept to fruition out among the Arizona cactus that became Christmas trees in every “man cave” from Puget Sound to Miami Beach.