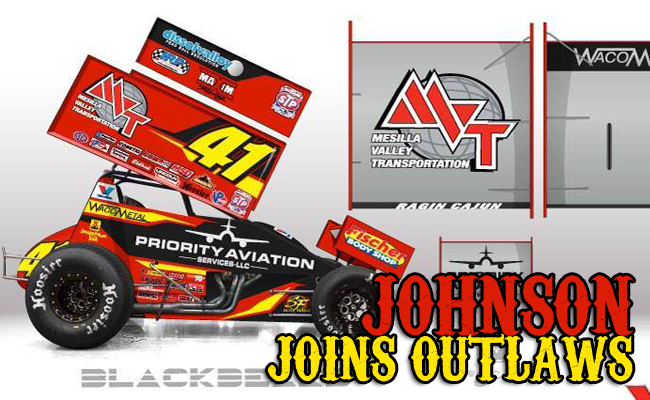 INDIANAPOLIS, INDIANA (December 12, 2014) – Jason Johnson Racing (JJR) is excited to fulfill a dream, by competing with the World of Outlaws STP Sprint Car Series for the upcoming 2015 season.

In order to attack the challenge of racing against the BEST in the business, Jason and the team have partnered with their committed sponsorship partners: Priority Aviation Services LLC; Mesilla Valley Transportation (MVT); Fischer Body Shop; Waco Metal; Saich Family and Dissolvalloy Frac Ball Revolution to kick off this journey of competition and success against the most formidable sprint car competition in the world.

Longtime crew chief Philip Dietz will head the team for JJR. Jason and Philip have worked together as a duo since the beginning starting in year 2000. Both have shared the goal of one day competing against the best in the business, the World of Outlaws. Jason commented, “Phil and I have been looking toward this opportunity for a longtime. I am excited for this upcoming season, and confident having Philip as our crew chief. We have been working together throughout each of our careers and now the time has come for each of us to give it our all to fulfill our dream.”

Since forming Jason Johnson Racing in 2010, along with his wife Bobbi, it has always been their vision and ultimate goal to race with the World of Outlaws on a full-time basis. Since its formation, Jason Johnson Racing (JJR) as an organization has taken on the characteristics of its owners highlighted by a balance of patience, perseverance and poise combined with a tenacity of purpose and an unwavering commitment to excellence on and off the track. After five consecutive Lucas Oil ASCS National Tour owner championships (2010, 2011, 2012, 2013 and 2014), Jason and the entire JJR team along with their sponsorship partners, are excited as they prepare their equipment to take on the best throughout the 2015 racing season.

During the last three full seasons with Stenhouse Jr. Racing, they have enjoyed tremendous success and are grateful to have had the opportunity to partner with Ricky Stenhouse Jr. and their Ford ASCS 360 program. Jason commented, “It has truly been a successful partnership resulting in three championships and we sincerely thank Ricky for his dedicated support through each of these championship years.”

The World of Outlaws STP Sprint Car Series have 92 events scheduled in 2015 starting in February in Florida through November at 59 tracks in 23 states and three Canadian provinces. It will be a busy year, but one that Jason and the JJR team are looking forward to running with a great group of competitors night in and night out.

Success in many ways is defined as dreams turning into reality. Jason and the team look to celebrate their success by turning this professional dream into reality in 2015 running with the World of Outlaws STP Sprint Car Series!