Action Heats up at Fulton Speedway 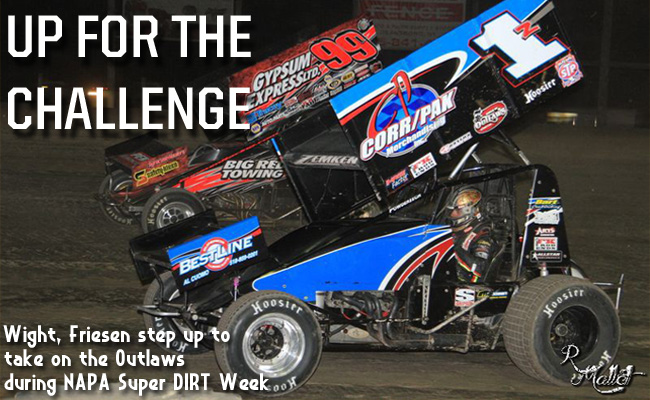 CONCORD, NC — Sept. 14, 2017 — As the sun goes down at Oswego Speedway on Saturday afternoon, October 7, the lights will go on at Fulton Speedway, just 15 minutes away, when the World of Outlaws Craftsman® Sprint Car Series joins NAPA Auto Parts Super DIRT Week for one night of hot racing action along with the Super DIRTcar Series Big-Block Modified 25-lap “Win and You’re In,” determining the final starting position in Sunday night’s Billy Whittaker Cars 200 main event.

Pending any conflicts at Oswego Speedway, at least two drivers will be running double-duty during NAPA Super DIRT Week. Five-time NAPA Super DIRT Week Champion Stewart Friesen and Phoenix, NY’s Larry Wight will shift their focus away from the Big-Block Modifieds for one night to jump behind the wheel of a 900-plus H.P. Sprint Car. Of course, both drivers hope to have secured their positions in Sunday’s main event before then.

The Modified teams fortunate enough to qualify for Sunday’s main event early in the week will test and tune their machines during the final practice session at Oswego Speedway Saturday afternoon. When the sun starts to go down, on-track time will end at Oswego, and those who have already qualified will spend the rest of the night poring over their racecars with a fine-tooth comb to prepare for the biggest Big-Block Modified race in the country. Friesen’s crew has been through this drill before, preparing a solid racecar for their Sparkers, NY driver.

“We have a solid crew with our Modified team that travels with me,” said Friesen. “They’ll spend Saturday night just like we used to do [at the New York State Fairgrounds] — just prepping the Big-Block Modified for a grueling 200-lap race. We did that last year while Jess and I went and played with the Sprint Car, and [the crew] came over about Feature time. It works out really good — just a good product of having a great race team and support from our sponsors.”

When the best Sprint Car drivers roll into town, the two Super DIRTcar Series Big-Block Modified stars look to make an impact on the national level by competing with The Greatest Show on Dirt. “It’s a blast to go run with those guys and hopefully be competitive,” said Wight. “I hope that it also shows how competitive the Big-Block Modified drivers are.”

Wight, who’s race shop is just down the road from Fulton Speedway, considers the 1/3-mile high-banked oval his home track and has made countless laps around the track, potentially giving him an early advantage.

“I know what the track is going to do and where the line is going to move to. [The Outlaws] are going to play a little bit of a guessing game for the first half of the night until they figure it out,” said Wight, going on to acknowledge that the advantage won’t last long. “They run at so many different tracks that it’s not going to take them very long to figure it out.”

A victory for the two Super DIRTcar Series drivers would be a cherry on the top of NAPA Super DIRT Week as they aim to pull off an upset victory over the full-time World of Outlaws Craftsman Sprint Car Series drivers. But mostly, they’re looking to have some fun.

“It’s nice that [Fulton] is right down the road from our shop and we’re not traveling hours down the road to hit the show,” said Wight. “We can unload the car and have fun. There really is no pressure as far as points go. Just go out and run the best we can.”

While much of the focus will be on the Sprint Car Series on Saturday evening at Fulton Speedway, the Big-Block Modifieds will have an important race of their own. Those who have not yet qualified for Sunday’s Feature will have one last chance. The evening’s “Win and You’re In” determines the 41st-starting spot in the Billy Whittaker Cars 200.

Originally, the “Win and You’re In” was established to assist teams that didn’t have a special chassis and/or a big-powered motor that could compete at the Moody Mile. With NAPA Super DIRT Week now at the 5/8th-mile Oswego Speedway, even more teams show up trying to make the 41-car field, creating an even more exciting event.

Last year, after several failed attempts in years prior, Chris Hile was finally able to capture a victory in the “Win and You’re In,” transferring him into Sunday’s main event at Oswego Speedway.

This year, the field vying for that last spot in Sunday’s Billy Whittaker Cars 200 is sure to be packed with talent and determination, two key ingredients in any great race.

Tickets for Saturday’s World of Outlaws Craftsman Sprint Car Series and Big-Block Modified “Win and You’re In” event at Fulton Speedway are available online or by calling 844-DIRT-TIX. Tickets, parking and camping spots for NAPA Super DIRT Week can be purchased at SuperDIRTWeekOnline.com.