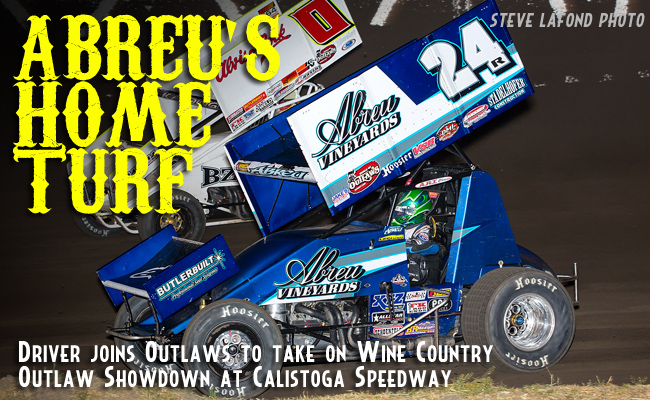 Looking for a “three-peat” against the World of Outlaws

CALISTOGA, Calif. – April 9, 2015 – As the World of Outlaws tour hits California’s Calistoga Speedway this weekend, one driver looking to defend his home turf against the out-of-towners is the Napa Valley’s Rico Abreu.

The reigning USAC National Midget driving champion is one of only three drivers to win more than one race on the highly competitive World of Outlaw tour this early in the season. After claiming victories on the WoO Western Swing at Tulare’s Thunderbowl and Stockton’s dirt track, Abreu is coming home looking for a “three-peat” against the Outlaws at the half mile oval where he has been nearly unstoppable in recent years.

“It’s good to race in front of my family and friends because, with all the travelling I do, it’s hard for them to see what I do for a living,” said Abreu earlier this year after winning a midget race in New Zealand the day after Christmas and days before claiming one of midget racing’s crown jewels, the Chili Bowl in Oklahoma.

Running an ambitious schedule of more than 100 races in 2014, Abreu won 26 of them in midgets and sprint cars on tracks from Florida and the Midwest to California, racking up a batting average that any big league baseball player would envy. His 2015 schedule is just as packed as last year, including a stock car commitment on the eastern side of the country. But Abreu is quick to note that there is nothing like racing at home.

But no matter how far-flung his racing schedule, Abreu is committed to be at Calistoga, where he has twice won the prestigious Louie Vermeil Classic and several winged sprint car events with the King of the West series for “410” sprint cars.

“I will be at Calistoga,” said Abreu, who lives in the town of Rutherford just a few miles up the road from the town of Calistoga. “My family is a big part of Calistoga and I want to support that.”

MOMENTOUS RETURN: May 8 marks 1-year anniversary of World of Outlaws’ ‘Return to Racing’