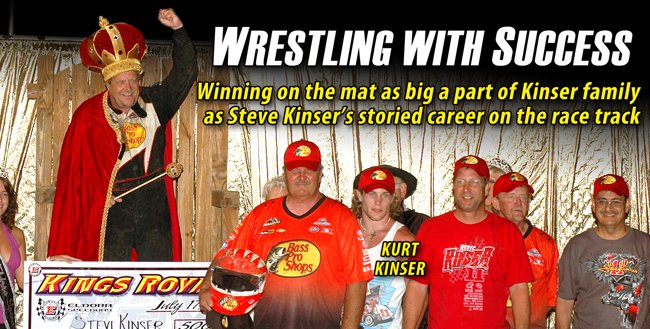 Wrestling a key part of growing up with the King of the Outlaws, a former Indiana champion

FRESNO, Calif. — March 17, 2011 — Steve Kinser has a lifetime of accomplishments in Sprint Car racing. He has won 20 World of Outlaws championships and has 565 victories, including multiple wins in the Knoxville Nationals and Kings Royal. He is known the world over as the King of the Outlaws. (Travis Branch photo)

What some might not know is that before he started racing, Kinser was an accomplished wrestler. A native of Bloomington, Ind., Kinser was the 1972 Indiana state wrestling champion at 132 pounds in his senior year of high school. This weekend, while he is racing in California on Friday at Giant Chevrolet Kings Speedway in Hanford and Saturday at Thunderbowl Raceway in Tulare, Kinser’s youngest son, Kurt, will be aiming for an NCAA national wrestling championship at Wells Fargo Center in Philadelphia. Steve’s oldest son, Kraig, will also be in California racing the Casey’s General Store car while his daughter, Stevie, assists Steve’s and Jason Sides’ teams.

(Click here to listen to the most recent “Outlaws Unleashed” podcast from WorldofOutlaws.com.)

Like his father, Kurt Kinser is also an Indiana state wrestling champion. As a senior, he won the 2006 title at 152 pounds after going 47-0 as a member of the Bloomington South High School team. Now a senior at Indiana University, Kurt Kinser went 4-1 in last weekend’s Big Ten tournament, finishing third overall to earn a berth in the NCAA Championships.

“It’s going to be really tough [not being able to watch him compete],” said Steve Kinser, who is currently leading the World of Outlaws championship battle in the Bass Pro Shops/J.D. Byrider/Chevrolet Maxim.  “This is his last year at Indiana University and his last shot at being an All-American. In my life, I’ve had to miss quite a few things, and I know this is going to be one of the toughest.”

Kinser and his wife, Dana, were able to watch Kurt in the Big Ten tournament after Steve won the World of Outlaws finale at Las Vegas Motor Speedway on March 3. Kurt, 23, and a Religious Studies and Criminal Justice major at Indiana, won four of his six matches at the Big Ten tournament and takes a record of 23-7 into his final collegiate event.

Meanwhile, Steve will be seeking his fifth victory of the season this weekend in California to extend his lead in the standings as he takes aim at his 21st series crown. He will count on Dana to keep him posted as he and Kurt hope to win on opposite sides of the country.

“We’ll just do our best to win a couple of races in California and, hopefully, he can win a few matches there,” Kinser said. “He’s worked really hard for a long time. I know how important it would be for him to finish his career with a really good weekend at the championships.”