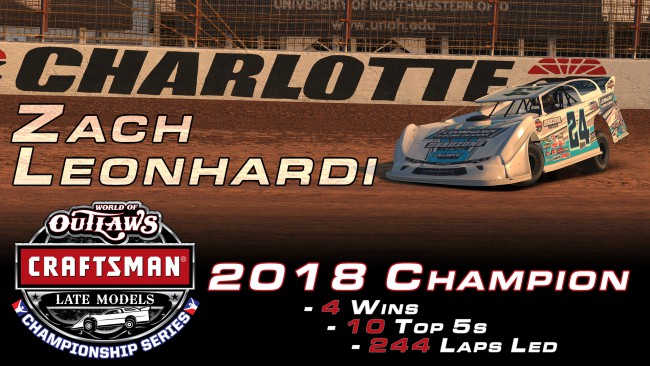 BEDFORD, MA — October 19, 2018 – Zach Leonhardi clinched the inaugural World of Outlaws Craftsman Late Model iRacing Championship with a victory at The Dirt Track at Charlotte on Monday night. Leonhardi takes home $5,300 cash for the championship and weekly purses, a World of Outlaws championship trophy and a dirt racing experience prize package with Clint Bowyer Racing. In total Leonhardi walks away with more than $10,000 in cash and prizes for his championship. He will also be recognized at the World of Outlaws banquet on November 4 as an official champion of the sanctioning body.

iRacing is the world’s premier online eSports racing game that organizes and hosts two World of Outlaws Championship series, Late Model and Sprint Car, where the best online dirt racers compete to be crowned world champion and for a prize pool of over $32,000.

Throughout the 2018 season Leonhardi was the class of the field, racking up four wins, and ten top-five finishes in the 11-race season. Howard Weaver and Alex Bergeron, who finished second and third in the season championship respectively, placed the most pressure on Leonhardi throughout the year, but ultimately where not able to match his consistency.

Weaver and Bergeron were still handsomely rewarded for their efforts, taking home $3,350 and $2,150 respectively in prize money for the year. In total, the series paid out $16,000 in cash to 16 of the 35 drivers competing.

“iRacing’s dirt racing is so real, it’s really unbelievable,” said Clint Bowyer, driver and owner of Clint Bowyer Racing. “It’s been fun to watch the online racing all season, and I am looking forward to getting on track with Zach at the Dirt Track at Charlotte and slinging some mud.”

“Zach was strong throughout the season and really earned the championship with his consistent finishes,” said iRacing.com President Tony Gardner. “To get one win in this series is an accomplishment, let alone four. Zach was the class of the field and is a deserving champion.”

“We’re really excited with how the inaugural season of the World of Outlaws Craftsman Late Model iRacing Championship went,” added World of Outlaws CMO Ben Geisler. “The racing was close and very competitive, and the way iRacing has modeled the changing track conditions is remarkable. Watching the drivers chase the moisture around the track during a race makes you feel like you are at the real track. Congratulations to Zach on the championship, and we look forward to honoring him at the banquet.”

The World of Outlaws Craftsman Late Model Championship Series was the first of six world championship series that iRacing sanctions. All told, iRacing will be paying more than $100,000 in prizes to their eSport racing champions in 2018.

The series finale of the World of Outlaws Craftsman Sprint Car Championship Series is Monday, October 22 at 9pm EDT. You can watch it live at www.iRacing.com/live, on iRacing’s Facebook page or on YouTube at www.youtube.com/iracingesportsnetwork.

The world leader in the online racing simulation and gaming market, iRacing was founded in 2004 by Dave Kaemmer and John Henry. Kaemmer was co-founder of Papyrus Design Group, developers of award-winning racing simulations including “Grand Prix Legends” and NASCAR 2003.” Henry is principal owner of the Boston Red Sox and Liverpool Football Club, as well as co-owner of NASCAR’s Roush Fenway Racing. iRacing.com has developed dozens of formal partnerships in the motorsport industry to help create the most authentic racing simulation in the world including with NASCAR, IndyCar, International Speedway Corporation, Speedway Motorsports, IMSA, Mazda Motorsports, McLaren Racing, Williams F1, Audi, BMW, Ford, Mercedes-Benz, Volkswagen, the World of Outlaws, the United States Auto Club and General Motors.