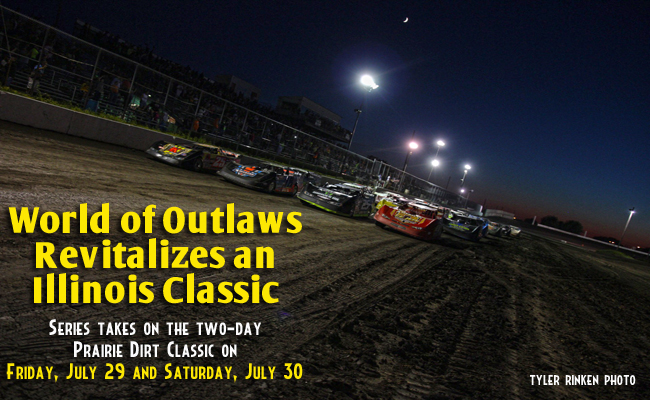 CONCORD, N.C. – July 18, 2016 – In less than two weeks the Prairie Dirt Classic will bring some of the best Late Model racing in the country to Fairbury, Illinois. For 27 years, the Fairbury American Legion Speedway has carried out the “Classic” tradition for Illinois drivers, but the event has become a full-fledged national extravaganza in just the last few years.

Since 2013, Fairbury Track Director Matt Curl and his track officials have partnered with the World of Outlaws Craftsman® Late Model Series, putting all of the track regulars on a national stage with the best drivers around the country.

“We wanted to go to the highest level,” Curl said. “We came together with World Racing Group and the World of Outlaws and made a match made in heaven for our speedway. That gave us the opportunity to bring the best drivers in the nation to Fairbury, which our fans really wanted. They wanted that marquee event.”

The World of Outlaws has grown the event with dirt racing juggernauts such as three-time series champion Josh Richards and defending series champion Shane Clanton. With a thick series heritage – drivers who rekindled the series in 2004 and young-guns carrying on the legacy – the Outlaws have blended their grassroots traditions into Fairbury’s for the event.

“There’s a vibe with that event,” said World of Outlaws Craftsman Late Model Series Director Tim Christman. “The whole city gets involved in it. You go to some communities where you’re looked at as the bad guys, but at Fairbury, heck, people are sitting outside on their lawn, arms out ready to give you a hug. It’s great to be involved with a community like that and to see this event grow.”

The event embodies dirt racing’s strong upbringing.  And it creates a must-see battle between David and Goliath. Christman says when the Outlaws take to the black Illinois bullring, they will find sturdy competition against the regulars.

Christman is proud to have Fairbury on the schedule Friday, July 29 and Saturday, July 30. Bringing a group of 15 full-time drivers to a $27,000-to-win show syncs with the Outlaw attitude – travelling to the biggest shows in the nation competing against regional favorites and hometown heroes for a hefty purse. The two-day event pays a strong $1,500 to start with full payout of $90,000 for the 100-lap feature event.

“We try to add value to the event,” said Christman. “It’s become an event that everyone wants to put on their schedule, and it fills me with a lot of pride to be a part of something like that.”

According to Christman, when he initially met with Curl and his staff several years ago, he could tell the event was struggling. But Curl adds that his staff puts “a lot of blood, sweat, time and effort” in making sure they get a great night of racing in for the fans. That paired with the immense fan support was enough to pull the trigger.

Curl is no newbie to the sport. His passion took off many years ago at that same speedway he now manages, when Curl, then nine-months old, gravitated towards the cars that were creating a powerful gust around the track with their high-powered motors. He was hooked.

Unbeknownst to him, Curl would eventually do the unthinkable at a track he called home at a very young age, transforming it into a three-time UMP DIRTcar Track of the Year. Now the track’s race director – from an official and crew member – Curl has created the ultimate fan experience and revitalized the Prairie Dirt Classic.

Curl is ready to include everyone in his passion, which he calls the “backbone of the speedway’s success.” There will be overflow camping around the speedway as he projects yet another standing-room only crowd.

In a three-year span, the speedway has seen steady growth. The last two years, the event has sold out of reserve camping, sections of reserved seating have been quickly claimed, and the event has become a standing room only frenzy. As for the driver roster, car counts have exceeded 60, and Curl expects this year’s lineup to be no different.

“We’re expecting the biggest crowd we’ve ever had at Fairbury,” Curl said. “That is what propels us. It’s always been a very good Midwestern race with a lot of tradition and values – homegrown stuff. But now, it’s a national race. I’m proud of it.”