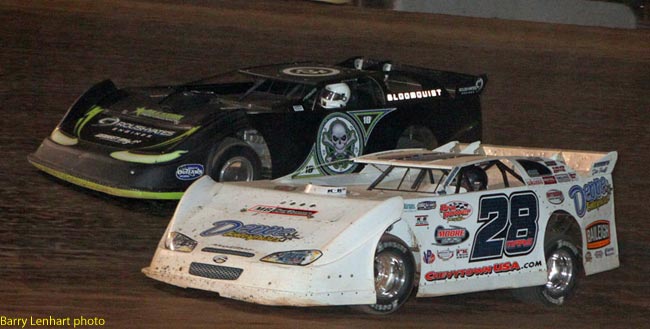 THE LATEST: Almost one week after the fifth annual Firecracker 100 presented by GottaRace.com at Lernerville Speedway in Sarver, Pa., ended with conversation-starting intrigue, there remains no official news concerning the protest that race runner-up Scott Bloomquist lodged on winner Jimmy Mars’s tires.

That will soon change, however. World of Outlaws Late Model Series director Tim Christman said Mars’s tires – as well as tires used in the Firecracker 100 by Bloomquist and third-place finisher Rick Eckert – are currently at a laboratory for testing and results should be available shortly after the Independence Day holiday weekend.

Mars’s tires became the story of the Firecracker 100 weekend after Bloomquist publicly questioned their legality following Mars’s convincing second career $30,000-plus victory in the crown-jewel WoO LMS event. Bloomquist’s protest asked WoO LMS officials to conduct a detailed laboratory test on the left-rear and right-front tires that Mars used in the race, which was run under DIRTcar UMP’s four-compound Hoosier tire rule that strictly forbids the use of chemical agents to soften the rubber.

Christman noted that WoO LMS officials were going to impound tires from the top-three finishers in the Firecracker 100 for further testing as standard technical procedure regardless of Bloomquist’s protest, but Bloomquist specifically requested that Mars’s left-rear and right-front tires be tested for unapproved chemical treatment. As part of the protest, Bloomquist is responsible for underwriting the cost of the detailed laboratory testing procedure that is being done to Mars’s tires.

Bloomquist told SPEED TV following the Firecracker 100 that he put in the protest because he wondered if Mars’s speed had derived from more than simply bolting on harder-compound tires.

“The big thing is, I never want to leave a race and not be a hundred percent sure why I was beat,” said Bloomquist. “It’s nothing against Jimmy Mars.”

Mars didn’t mince any words when presented Bloomquist’s rational for the protest, telling SPEED, “If he would’ve went with that tire combination, he would’ve thought he was the smartest guy in the pits.” While denying the accusations of tire doctoring, Mars also accused Bloomquist of being “a sore loser.”

For more comments about the tire story from Bloomquist and Mars, visit www.4wide.tv and watch the June 29 episode of 4Wide Weekly, a new internet show that offers video coverage of the WoO LMS as well as WoO Sprint Car Series and other DIRTcar-sanctioned events.

PULLING AWAY: Don’t look now, but Rick Eckert and Josh Richards have suddenly turned the 2011 WoO LMS points race into a two-driver battle.

Eckert, 46, of York, Pa., and Richards, 23, of Shinnston, W.Va., distanced themselves from the rest of the World of Outlaws points pack with solid performances during the Firecracker 100 weekend. Eckert finished second in both 30-lap preliminary A-Mains and third in the 100-lapper, while Richards scored a victory and a fifth-place finish in the prelims and registered a late-charging fourth in the Firecracker finale.

No driver, it should be pointed out, has ever won the WoO LMS championship after falling more than 100 points out of the lead.

FADING: Lanigan’s ballooning points deficit is one of the tour’s most surprising current trends.

While Lanigan knew his margin for error would be small this season after he missed the 2011 opener at Florida’s Volusia Speedway Park due to medical issues related to his treatment for lower-back pain, he roared back with a vengeance and after eight events had pulled from a season-high 120 points out of first to just 22 back. But even with four wins and eight top-three finishes to his credit in ’11, a DNF in the ninth race (at Georgia’s Needmore Speedway) and his unexpected failure to score a single top-10 finish during the Firecracker 100 weekend have left him with another triple-digit points gap to make up.

CHECKERED FLAG DROUGHT: Tim McCreadie dearly needs a win in this weekend’s ‘Outlaw Sizzler 101’ at Tazewell. Without one, his winless streak on the WoO LMS will exceed one year.

The 37-year-old McCreadie hasn’t won on the tour since July 7, 2010, at Deer Creek Speedway in Spring Valley, Minn. – a span of 33 races entering this weekend’s action. He’s hopeful that he’s closing in on a victory after running increasingly better during the Firecracker 100, finishing ninth (Thursday prelim), seventh (Friday prelim) and sixth (100).

Of course, McCreadie did win on Tennessee soil last year, capturing the Independence Day weekend event at Wartburg Speedway before heading over to Tazewell (where a flat tire forced him to pit and settle for a 12th-place finish).

And McCreadie did at least get a taste of victory last weekend at Lernerville, where he combined with Jerry Daugherty-Rouse of Millersburg, Ohio, to win the first-ever Firecracker 100 Driver/Fan Cornhole Tournament on Saturday afternoon.

“I haven’t won anything all year,” McCreadie said after capturing the beanbag-tossing game, “so this is pretty cool.”

The Outlaw to watch in the tourney was Chub Frank, who had joined with different fans to win the Firecracker horseshoes title in 2009 and 2010. His bid for an unprecedented third straight victory evaporated quickly, however, when the Bear Lake, Pa., driver and his partner, Ryan Southwell of Sugar Grove, Pa., were defeated in the quarterfinal round by Clint Smith (with teammate Butch Pavlik of Tarentum, Pa.).

Lernerville veteran Lynn Geisler emerged as the horseshoes tournament winner for a record third time, combining with Kelly Miner of Mill Run, Pa., to take the $300 top prize. Geisler and Miner – the wife of Frank’s partner in ’10 and the first female to be part of a winning Firecracker 100 horseshoes team – split $300 after defeating Team Clint Smith, 21-9, in the championship.

WALKING WOUNDED: Clint Smith’s chief mechanic, Brad Baum, is hoping to be a bit more mobile this weekend at Tazewell after experiencing a painful Firecracker 100 weekend.

Baum’s visit to Lernerville became a tough one after he was struck in the pit area during Thursday night’s racing program by a four-wheeler steered by a Scott Bloomquist crewman. While Baum escaped serious injury when he was knocked to the ground, he did make a trip to a nearby emergency room for a checkup. He sported bruises to his ankles, leg and back and a bump on his head as he assisted Smith for the remainder of the weekend, albeit at a slower pace.

UP NEXT: This weekend’s ‘Outlaw Sizzler 101’ – the biggest race ever run at Tazewell Speedway – includes time trials and heat races on Sat., July 2, and B-Mains and the 101-lap headliner on Sun., July 3. Mon., July 4, is reserved as a raindate.

Additional information is available by logging on to www.TazewellSpeedway.net or calling 865-626-2222.