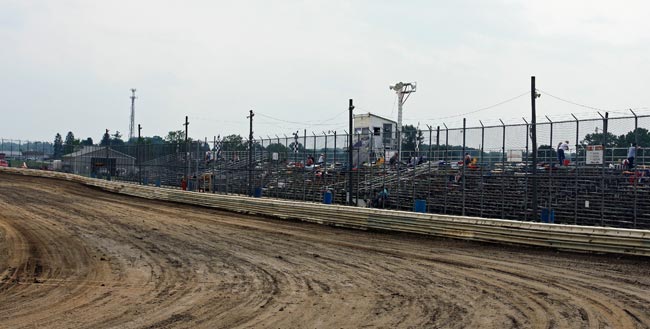 For First Time Ever, National Tour Will Share A Racing Program With Wingless Sprint Cars

ORRVILLE, OH – May 20, 2013 – The World of Outlaws Late Model Series will be part of an unprecedented doubleheader this Friday night (May 24) at NAPA Auto Parts Wayne County Speedway.

The Memorial Day holiday weekend kicks off with a treat for race fans as the WoO LMS and the Buckeye Outlaw Sprint Series (BOSS) compete at the three-eighths-mile Wayne County oval, marking the first time ever that the renowned national full-fender tour will share a racing program with the wingless 410 Sprint Car division.

“We couldn’t be more excited about Friday night’s show,” said Jason Flory, a dirt Late Model driver-turned-racetrack promoter who is in his second full season operating WCS with his wife (and fellow dirt Late Model competitor) Kristin. “We know that the World of Outlaws Late Model Series has never run (on the same card) with wingless Sprint Cars so we see this as an opportunity to give the fans something really unique and hopefully hit a home run with it.”

The attention-grabbing, Southeastern Equipment-sponsored event, which includes the $10,000-to-win WoO LMS Buckeye 50 and a BOSS feature offering a $2,000 first-place prize, was set up after wet and cold spring weather wiped out last month’s planned two-day Buckeye 100 at Wayne County. When WoO LMS director Tim Christman suggested a Memorial Day weekend raindate for WCS’s World of Outlaws stop, Jason Flory quickly jumped at it – even though he already had the special BOSS race scheduled on Fri., May 24.

“We just didn’t want to lose the World of Outlaws show because it’s our biggest race of the year and it’s the only Outlaw (Late Model) race in Ohio this season,” said Flory. “Tim (Christman) said, ‘Friday of Memorial Day weekend is the only day we can come back that makes sense for both of us,’ so we decided we had to make that day work. We realized that running the World of Outlaws with the BOSS wingless Sprints would create a big purse for us, but we figured it would be worth it.

“We’ve gotten good (crowd) numbers for our BOSS races the last two years, so we thought, ‘Hey, maybe running the World of Outlaws Late Models and wingless Sprints together would be something different and interesting that gets everyone talking.’ I had thought about doing something like this but was never brave enough to try it, so I guess losing the 100-lapper last month pushed us to go for it.

“With the World of Outlaws Late Models blasting around the track and the BOSS wingless Sprints on the ragged edge sliding hard through the turns,” added Flory, “I think we have a show that’s going to appeal to both Late Model and Sprint Car fans.”

WCS’s pit and grandstand gates are scheduled to open at 4 p.m. on Friday, with racing set to get the green flag at 7:45 p.m.

General admission for Friday night’s program, which also includes racing for the track’s Super Stock division, is $28. Reserved seating in the top four rows is $30 and pit passes are $40.

For additional information visit www.waynecountyspeedway.com or 330-465-2365.