WoO LMS Rookie of the Year Battle Heating Up 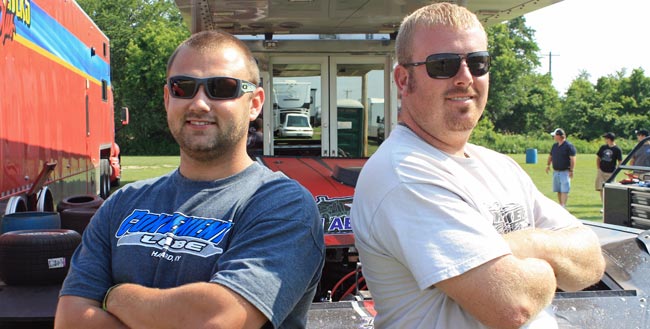 CONCORD, NC – July 15, 2013 – The battle for the 2013 World of Outlaws Late Model Series Rookie of the Year Award between Eric Wells and Morgan Bagley is about to crank up a notch.

With the next swing of action – a stretch highlighted by the $20,000-to-win Prairie Dirt Classic on July 26-27 at Fairbury (Ill.) American Legion Speedway and the $50,000-to-win USA Nationals on Aug. 1-3 at Cedar Lake Speedway in New Richmond, Wis. – the national tour will pass the 30-race mark for the season. That means Wells and Bagley will begin replacing their worst finishes, intensifying a rookie chase that is shaping up as the most intriguing in series history.

Wells, 24, of Hazard, Ky., and Bagley, a 27-year-old open-wheel Modified transplant from Longview, Texas, are as evenly-matched a rookie pair as the WoO LMS has ever seen. The advantage in dirt Late Model experience belongs to Wells, who has exclusively raced in the division since he was 16 years old, but both drivers possess rock-solid teams staffed by savvy fulltime crewmen and have shown the ability to contend against the country’s top full-fender talent.

And the two up-and-coming racers have become friends, adding another element to a Rookie of the Year honor that will be determined using each driver’s 30 best finishes.

“Last year I ventured out a little and I saw Eric on the road and we talked a little bit,” said Bagley, who is in his third full season driving Rocket dirt Late Models owned by fellow Texan Wayman McMillan. “But of course, the more you travel together and see each other, you become closer. We get along great and I think a lot of him. He’s a good driver and it’s just fun to compete against somebody who you can race good with.

“When we get together we’re comfortable racing with each other. We ain’t gotta worry about wiping each other out, and that’s gonna be cool as we race for this rookie deal.”

“We’ve gotten to know each other pretty good this year,” added Wells, who campaigns Team Zero by Bloomquist machines fielded by his father David. “We trust each other on the track, which means a lot because if we finish the rest of the year like the last couple weeks have gone, things will definitely be close. It seems like we’re side-by-side (racing for position) just about every race.”

Through 29 A-Mains, Wells has the advantage on Bagley, sitting seventh in the WoO LMS points standings – one spot and 66 points better than Bagley. Both drivers have started every A-Main and recorded 13 top-10 finishes, but Wells owns one win (his career-first Outlaw score came on April 28 at Duck River Raceway Park in Wheel, Tenn.) and seven top-fives while Bagley has just a single top-five run to his credit (career-best third-place finish on June 25 at New York’s Canandaigua Motorsports Park). Wells also leads Bagley in fast-times (2-0), heat wins (4-2), B-Main victories (4-1) and earnings ($62,535 to $46,780).

Wells comes to the WoO LMS with three seasons of national touring with the Lucas Oil Late Model Dirt Series under his belt – a definite advantage over Bagley, who estimated that he began the 2013 schedule having competed in less than two-dozen dirt Late Model events that used time-trial qualifying. But as Wells admits, his racing education is far from complete.

“I’m still learning,” said Wells, who entered this season with six career dirt Late Model feature wins – the richest worth $5,000 – divided among three Kentucky tracks. “I’m traveling with a different bunch of guys and racing shorter races than I got used to running with Lucas (which had more 100-lap events). Plus there’s an open tire rule (for most WoO LMS shows), so it’s a whole new learning curve for me.”

Wells has shown plenty of speed on this year’s World of Outlaws trail, including a head-turning performance in February at Volusia Speedway Park in Barberville, Fla., a third-place finish in a Firecracker 100 preliminary A-Main at Lernerville Speedway in Sarver, Pa., and back-to-back top-fives during last week’s Wild West Tour. He’s also lumbered through his share of rough rookie nights.

“It’s easy to run bad out here and it’s hard to run good,” analyzed Wells. “We’ve been good in the traction, but when the track slicks off we gotta get it together. It ain’t happened yet, but that’s what we’re learning out here.

“What’s important is making all the races and being able to finish the feature so you get every lap in that you can. Every time we’re on the track we learn something. You gotta take good notes, compare tracks to other tracks and make the best of it.

“We’ve been fortunate enough to have some good runs this year and even win a race,” he added. “That definitely boosts your morale, but when you get a good run and then go to the track the next night and can’t back it up, that’s a little disheartening. You wonder, ‘What did we do wrong? The car’s the same, but we were totally off.’ That’s where being a rookie and having to learn to adjust the car and adjust as a driver from track-to-track to get consistent runs is difficult on us.”

Bagley’s learning curve has been even steeper than Wells’s. He quickly found success – he won the 2011 SUPR Late Model Series championship and scored 10 full-fender feature wins over the past two years, including a $10,000 ‘Wild West Shootout’ victory in January 2012 at Arizona’s Tucson International Raceway – but took to the WoO LMS trail with no delusions of grandeur.

“I was warned this wasn’t gonna be no easy deal,” Bagley said of the WoO LMS. “And I’ve raced plenty and know this is a very humbling sport, so I knew it wasn’t gonna be easy by no means. I knew that if I could just come out here, put my mind to it and race the whole year, and no matter what happens not drop off and not give up – just weather the storm – that it would make me a better racer.

“That’s what I’m trying to do. In the future, I want to be able to contend for crown jewels and championships. To do that it’s gonna take getting through this rookie year, these first years.”

Pushing onward through the inevitable tough outings on unfamiliar turf has been a challenge for Bagley, but it’s given him a clear picture of what it takes to be a professional dirt Late Model driver.

“You gotta give the guys who have done it for awhile some respect,” said Bagley, praising the WoO LMS veterans. “When things are going good it’s easy going up and down the road to race. You’re having fun, enjoying yourself. But whenever you have some bad nights and you have to keep on digging, that’s definitely what’s gonna separate the cream of the crop.

“One good thing is that I got some good people helping me with (chief mechanic) Randall (Edwards) and Nick (Hoover). They’ve been traveling awhile, so anytime you get down they’ll tell you, ‘This —- don’t happen overnight.’ And they’re right – all these guys have been doing this for 20 years plus, so when you go out and compete with ’em it’s good – and when you fall on your face you can’t use it as an excuse. You can be like, ‘Let’s let that one slide and try again the next day.'”

Bagley certainly can see the light at the end of the tunnel. He understands the focus of his rookie season.

“It costs a lot of money to run up-and-down the road,” said Bagley, “and I think as long as we can make the shows and get up there and be competitive, finish the features and not tear up stuff, it makes it a lot easier on the car owners. When they say, ‘Hey, are you learning anything?’ you can say, ‘Yeah, we’re learning. We’re putting it in the trailer in one piece every night.’ When you get out there and you’re not competitive, and night after night you just struggle and you’re living off food stamps back there and tearing stuff up, that’s when it gets hard on the car owners. They’re not gonna want to keep funding a program like that.

“We’re definitely aware of what we need to do this year. Learning how to adapt to any situation, any condition, comes with a lot of bad nights, but the bad nights are what make the good nights good nights. Whenever you have a bad night you have to remember what it feels like and just go in there for the next race with a positive attitude.

“Those good nights at least let you know you can do it. It definitely ain’t happening too many times in a row, but those good runs keep you running. They keep a little fuel on the fire.”

The WoO LMS is scheduled to hit the 30-race mark on July 26-27 when the tour makes it first-ever appearance at Fairbury American Legion Speedway for the 24th annual Prairie Dirt Classic. The weekend includes Ohlins Shocks Time Trials, heat races and a 25-lap ‘Champions Dash’ on Fri., July 26, and B-Mains, a Non-Qualifiers’ Race and the 100-lap A-Main on Sat., July 27.