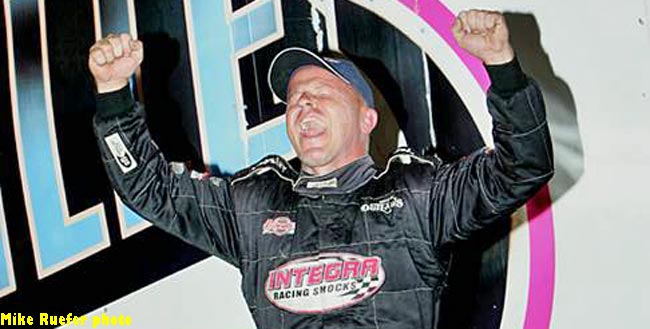 With the national tour idle for the first time this fall, World of Outlaws travelers fanned out to tracks across the country. Four of them – Darrell Lanigan of Union, Ky., Josh Richards of Shinnston, W.Va., Rick Eckert of York, Pa., and Shane Clanton of Zebulon, Ga. – represented the series well with big victories.

Lanigan, 43, claimed the $40,000 Knoxville Nationals prize after passing Richards for the lead on a lap-94 restart. The defending WoO LMS champion added the rich event to a resume that also includes crown-jewel victories in the 2003 Dirt Late Model Dream at Eldora Speedway in Rossburg, Ohio; the ’03 Dirt Track World Championship at Bluegrass Speedway in Bardstown, Ky.; and the 2012 USA Nationals at Cedar Lake Speedway in New Richmond, Wis.

“It’s one of the bigger ones,” Lanigan said when asked what winning the Knoxville Nationals meant to him. “It ranks right up there with the Dream and all them (other major races). It’s a big event.”

Lanigan’s victory also gave him a special sense of satisfaction in the wake of a frustrating outing in the previous evening’s 25-lap preliminary feature. He was battling at the front of the pack early in that event when contact with Richards sent him spinning in turn one. Lanigan went on to finish 19th and spend several minutes following the race in his trailer engaged in an animated discussion with his friendly rival and WoO LMS travel partner Richards, who won the event.

“We just had a little bit of drama (Friday) night which I don’t like,” Lanigan said during the press conference that followed his Saturday-night victory. “Me and Josh race hard and we do get into each other when you’re racing hard like that. When we do (tangle), it’s usually up front.”

Lanigan’s late-race pass of Richards in the 100-lapper gave him the last word in his weekend-long battle with the 25-year-old sensation, who was bidding to become just the second driver in the history of the Knoxville Late Model Nationals to sweep all three legs of the event. The two-time WoO LMS champion and current points leader beat Lanigan to the finish line in Thursday night’s first preliminary race and earned another $7,000 check for capturing Friday night’s headliner.

Richards, who called his Friday-night scrape with Lanigan a racing incident, recorded his third career runner-up finish in the Knoxville Late Model Nationals 100. Falling short again – especially after he had overtaken Lanigan for the lead on lap 84 – left Richards struggling to wear a happy face during Saturday’s post-race press conference.

“We still had a phenomenal weekend and our guys did a great job,” said Richards, who was hoping to duplicate his sweep earlier this year of the three-night WoO LMS Firecracker 100 at Lernerville Speedway in Sarver, Pa. “I’m just very competitive…and anytime you feel like you should’ve done something different to win the race, that’s just part of it. I try to hide (the emotions) as much as I can, but it’s still frustrating.”

Lanigan and Richards were part of a five-driver WoO LMS contingent that competed in the Knoxville Late Model Nationals. The others in action were McCreadie, who preceded his third-place finish in the 100-lapper with a DNQ on Thursday and a fifth-place finish (from the 21st starting spot) on Friday; Bub McCool of Vicksburg, Miss. (fifth on Thursday, DNQ on Friday and 30th in the 100); and rookie Morgan Bagley of Longview, Texas (13th on Thursday, DNQ on Friday, 28th in the 100).

Eckert, 47, entered both races behind the wheel of the Paul Crowl-owned Rocket No. 7 that he drives in selected events near his Keystone State home. It was his sixth win in 13 starts with Crowl’s machine this machine.

Clanton, meanwhile, was victorious in Sunday’s 40-lap Southern All-Star Late Model Series A-Main at East Alabama Motor Speedway in Phenix City, Ala. – his first triumph since he captured a WoO LMS event on June 1 at Stateline Speedway in Busti, N.Y. He recovered from a quiet sixth-place finish on Saturday night to claim the $4,000 top prize posted for the second half of the Alabama State Championship Weekend.

NO NEW YORK TRIP: The consolidation of events at NAPA Auto Parts Super DIRT Week has led to the cancelation of the WoO LMS event scheduled for Thurs., Oct. 10, at Rolling Wheels Raceway Park in Elbridge, N.Y., officials announced on Monday.

The cancelation of the WoO LMS/DIRTcar 358-Modified Series doubleheader at Rolling Wheels resulted from an agreement DIRTcar Racing officials made with Brewerton (N.Y.) Speedway owner John Wight, whose one-third-mile track was slated to run a special event head-to-head with Rolling Wheels on Oct. 10. The $10,000-to-win SUNY-Canton Hurricane 100 Presented by Ferris Mowers at Brewerton that Thursday will now be sanctioned by DIRTcar as a DIRTcar 358-Modified Series event.

It’s expected that WoO LMS regulars Tim McCreadie and Tim Fuller will compete in the 358-Modified 100-lapper at Brewerton. Both drivers have roots in DIRTcar Northeast Modified racing and will be racing in NAPA Super DIRT Week Big-Block and 358-Modified activities from Oct. 9-13 at the one-mile New York State Fairgrounds in Syracuse, N.Y.

Fans that purchased tickets to the WoO LMS event at Rolling Wheels and have them at Will Call will have their tickets refunded in seven to 10 days. Fans that already have their Thursday-night tickets to Rolling Wheels in hand can use the face value of the ticket for the event at Brewerton or for NAPA Super DIRT Week at the New York State Fairgrounds.

Fans with questions about their Rolling Wheels tickets are encouraged to call the DIRTcar Ticket Hotline at 877-395-8606.

HOMESTRETCH: With the cancelation of the Oct. 10 event at Rolling Wheels, the WoO LMS will be idle until November. The tour is scheduled to return to action on Tues., Nov. 5, at Lavonia (Ga.) Speedway followed by the World Finals on Nov. 7-8-9 at The Dirt Track at Charlotte in Concord, N.C.

Richards holds a commanding 106-point lead over Lanigan and 110-point edge over Clanton in the WoO LMS standings with just the three 50-lap A-Mains remaining on the 2013 schedule. The young superstar can clinch his third career title by averaging a 17th-place finish in the final three races.

RECORD-BREAKER: The next WoO LMS A-Main that is completed will be the 45th of the 2013 campaign, establishing a new single-season record for races on the tour. Forty-four races were contested in both 2007 and ’10.

Another WoO LMS milestone is also within reach. If all three A-Mains left on the schedule are run, the second 50-lapper during the World Finals will be the 400th feature of the tour’s World Racing Group era (2004-present).