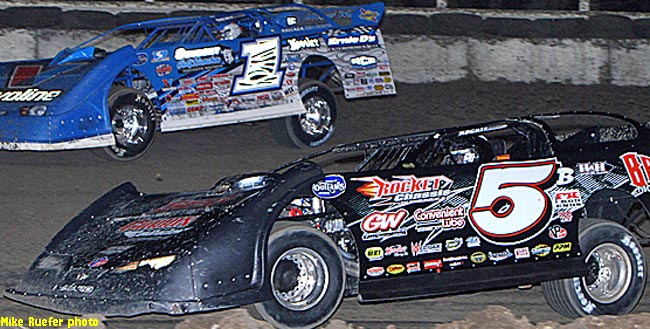 HEADED TO TENNESSEE: Next up on the 2013 World of Outlaws Late Model Series schedule is a trip to Tennessee that represents a rare occurrence for the national tour: a same-state tripleheader comprised of three different tracks.

When the WoO LMS rolls through the Volunteer State this weekend for events on Friday (April 26) at Smoky Mountain Speedway in Maryville, Saturday (April 27) at Tazewell Speedway and Sunday (April 28) at Duck River Raceway Park in Wheel, it will mark just the third time in the circuit’s history that it contests races on consecutive days at three tracks in a single state.

The only other instances that match this Tennessee Triple-Play in the WoO LMS record book both came in Ohio. In 2008 the series ran at Muskingum County Speedway, Eldora Speedway and Sharon Speedway from July 24-26 and in ’10 visited Sharon, Attica Raceway Park and Muskingum County from July 29-31.

This weekend’s WoO LMS action was originally scheduled as a doubleheader at Smoky Mountain and Tazewell, but it grew to a full three-race swing after Duck River’s event was postponed from March 24 due to wet and cold weather. All three events will be topped by a 50-lap A-Main paying $10,000 to win.

A high-banked, quarter-mile oval just over an hour’s drive south of Nashville, Duck River will host the WoO LMS for the first time on Sunday. Smoky Mountain’s World of Outlaws show will be its first since 2004, while the famed banks of Tazewell will see WoO LMS competition for the fourth season in a row.

A total of 16 WoO LMS events at eight different tracks have been run in Tennessee since 2004, when the tour was restarted under the World Racing Group banner after a 15-year layoff. Eight of those races came during the 2004 and ’05 seasons, including six in ’04.

Eleven drivers have won a WoO LMS A-Main in Tennessee. Five drivers own a pair of victories (Scott Bloomquist, Steve Francis, Shane Clanton, Tim McCreadie and Chris Madden) and six have single triumphs (Rick Eckert, Brian Birkhofer, Billy Moyer, Jimmy Owens and Bub McCool). Bloomquist and Owens are the only Tennessee drivers to win a World of Outlaws event in their home state.

Tazewell’s past WoO LMS winners include Clanton, Madden and McCool, who scored his first-ever World of Outlaws triumph in last year’s event. The lone WoO LMS stop at Smoky Mountain in ’04 was captured by Eckert.

TIRES: In conjunction with the three host tracks, WoO LMS officials have announced a tire rule for this weekend’s three events. All entrants must use Hoosier 1300-compound or higher tires or American Racer 44-compound or higher rubber, and the ‘punch 40’ durometer reading will be in effect.

T-MAC HEATING UP: If the 2012 season is any indication, Tim McCreadie is ready to go on a WoO LMS hot streak.

Last year the 39-year-old star from Watertown, N.Y., won his first WoO LMS A-Main of the season at 311 Motor Speedway in Pine Hall, N.C. – and on Saturday night he put his first ’13 checkered flag on the board at the same half-mile oval. He followed his ’12 triumph at 311 Motor Speedway with 16 straight top-10 finishes – including one stretch of nine consecutive top-five runs that bested even record-setting champion Darrell Lanigan’s longest top-five streak of the season – so he’s hopeful that success at the Tar Heel State track is once again a harbinger of good things.

Of course, McCreadie slumped badly in ’12 after his strong May-July, absorbing eight DNFs and scoring just a single top-five finish (second place in the finale at The Dirt Track at Charlotte) over the final 15 WoO LMS events. But he’s off to a much stronger start this season, raising the confidence for sustained success he has in his Sweeteners Plus Warrior Chassis cars. His victory in last year’s event at 311 Motor marked his first top-five run (and just his fourth top 10) in 10 A-Mains; this year through an identical 10 races he already has four top-five and seven top-10 finishes.

This weekend McCreadie will look to improve upon his previous WoO LMS finishes at Tazewell, which include a best of fifth in 2011 (he was 12th in ’10 and 23rd in ’12). He entered the 2004 WoO LMS event at Smoky Mountain but did not start the A-Main and has never visited Duck River.

GOOD JOB, ROOKS: WoO LMS Rookie of the Year contenders Morgan Bagley of Longview, Texas, and Dillon Wood of New Smyrna Beach, Fla., enjoyed much-needed uplifting performances on Saturday night at 311 Motor Speedway. Bagley’s sixth-place finish was his career-best on the WoO LMS, while Wood rallied from the 23rd starting spot for a ninth-place finish that represented his first top-10 outing of 2013 (though not a career high).

Wood’s run was especially noteworthy considering the trials and tribulations he encountered leading up to the A-Main. First, he was penalized for arriving late to his spot in the time-trial qualifying order, knocking his ninth-fastest time down to 16th. (Late arrivals can time no better than half the night’s field – 29 cars, in this case – plus one.) He then dropped out on the opening lap of his heat race after the ball spline on his transmission broke, forcing him to pull out his backup car. A points provisional got him into the A-Main lineup.

Smith, who was happy to see last Friday night’s WoO LMS show at Fayetteville (N.C.) Motor Speedway called off early due to approaching storms because he did not yet have an engine ready to go, qualified strong at 311 with the fresh powerplant to earn the fourth starting spot in the A-Main. He was running fifth at a lap-nine caution flag when the ball spline on his car’s transmission broke, forcing him to limp into the pit area and suffered a disappointing 24th-place finish.

McCool, meanwhile, was running sixth and appeared ready to challenge for a top-five spot when he slowed on a lap-22 restart and retired due to an overheating engine.

ILLINI 100 PENALTY: Jason Feger of Bloomington, Ill., has been stripped of his emotional victory in the recent Illini 100 at Farmer City (Ill.) Raceway and assessed several other penalties because a tire he used during the April 5-6 weekend failed a laboratory test for chemical softening agents, WoO LMS officials announced on Monday.

Two samples of the right-front tire that was on Feger’s car when he won the third 15-lap heat race for the Illini 100 on April 5 were taken by WoO LMS tech inspector Jim Harrah and sent to a lab for chemical analysis. After both the ‘A’ and ‘B’ samples failed to satisfy the benchmark standards for a Hoosier DIRTcar UMP LM-20 tire, WoO LMS officials were forced to take action against Feger for violating the circuit’s rules prohibiting the altering of tire compounds.

Feger, who started from the outside pole and led every lap of the Illini 100, has been notified by WoO LMS officials of his penalties, which include disqualification from the Illini 100, including loss of all purse money ($20,050) and WoO LMS championship points earned; a fine of $3,000; loss of 1,000 WoO LMS championship points for the 2013 season; and a suspension from all WoO LMS and DIRTcar UMP Late Model-sanctioned events for three consecutive months (effective April 19-July 19). In addition, following the conclusion of the suspension Feger will be placed on probation for the remainder of the 2013 racing season.

As a DIRTcar UMP member in good standing, Feger has the opportunity to appeal the decision to the World Racing Group Appeals Commission. His penalties would not go into effect until they were upheld, adjusted or overturned by the Appeals Commission following a hearing of his case.

Feger, 34, said he plans to submit a formal appeal in hopes of reducing his penalties by shedding light on his tire’s failed laboratory tests, which he attributes to the fact that the tire in question was one he cleaned during the winter with a degreaser-type product and then wrapped in plastic for off-season storing. He concedes that the cleaning product he used is likely what caused the tire to miss the established benchmarks but strongly asserts that he did not use it to illegally soften the rubber in search of a competitive advantage.

“The test isn’t lying,” said Feger. “There’s definitely stuff in that tire, but I didn’t knowingly put that stuff in there to soften the tire. You just take for granted when (a cleaning product) says biogradeable, non-toxic or whatever – you don’t think it can soften rubber or even soak into the rubber. We’ve since learned that the chemical that we use to wash our tires contains bad stuff. I got online and there’s a material safety sheet for the product, and it definitely has the chemicals that people use to soften tires. And from what I can tell, the (plastic) wrapping we used on the tires to keep the dust and stuff off them over the winter time must have held the stuff in and not let it gas out or whatever it does compared to normal.

“I guess you really need to know exactly what you’re washing your tires with. The best thing would be to just not use it – use dish soap or laundry detergent to clean the tires I guess.”

If Feger’s disqualification from the Illini 100 is among the penalties that are upheld, apparent race runner-up Billy Moyer of Batesville, Ark., would become a three-time winner of the event and all competitors would move up one spot in the finishing order. Feger would be placed last in the rundown.