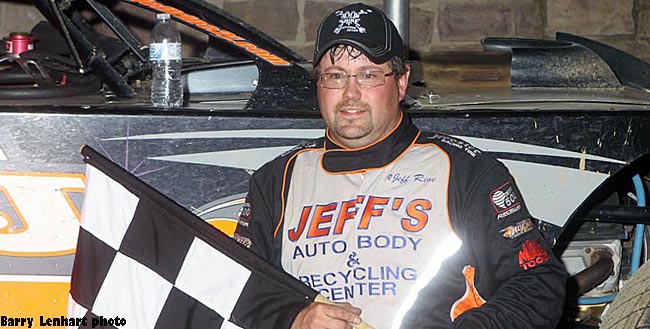 SELINSGROVE, PA – Aug. 24, 2012 – No one is more excited about the first-ever World of Outlaws Late Model Series event at Selinsgrove Speedway this Sunday night (Aug. 26) than Jeff Rine.

The historic track’s most prolific dirt Late Model winner has, after all, been waiting a long time to challenge a national tour’s superstar drivers on his home turf.

“We’ve gone to other tracks to run World of Outlaws shows over the years,” said Rine, 35, of Danville, Pa. “It’s gonna be real neat to have the Outlaws come to our track and see what we can do.”

A winner of seven points championships – including the last five in a row – and a record 77 career dirt Late Model features at Selinsgrove, Rine would love to reach Victory Lane in the richest dirt Late Model race ever contested at the sprawling half-mile oval. He knows capturing the 50-lap headliner’s $10,000 top prize will be an extremely difficult task, however.

“It would be like a dream come true to win it,” said Rine, who has entered 17 WoO LMS events since 2007 and started eight A-Mains, with a top finish of 10th on June 24, 2009, at Big Diamond Raceway in Minersville, Pa. (he also set fast time and won a heat race that evening). “A lot of people we know will be there, so it sure would be a fun night if we could pull it off.

“Being that it’s our hometrack, I think we should definitely have an advantage,” he continued. “But the Outlaw guys (race) for a living so they don’t take much time to figure a place out, and that’s gonna make it tough on us. We’re just gonna try to do our best to make the locals proud.”

Rine enters Sunday’s action with plenty of confidence, owning five wins this season at Selinsgrove and appearing to be well on his way to tying Bobby Croop of Nescopeck, Pa., for the track-title record of eight. He seems to be firing on all cylinders at the right time to take on a star-studded WoO LMS roster that includes the sizzling Darrell Lanigan of Union, Ky. (record 13 wins in 2012); defending champion Rick Eckert of York, Pa., who started his career at Selinsgrove and won the track’s Late Model National Open last October; 2006 champion Tim McCreadie of Watertown, N.Y.; Shane Clanton of Fayetteville, Ga., who won this season’s $100,000 Dream event at Ohio’s Eldora Speedway; and two-time champ Josh Richards of Shinnston, W.Va., who will take advantage of a break in his NASCAR Nationwide Series schedule to return to the full-fender tour.

“I think we’re at our best,” said Rine, who will get one final tuneup for the WoO LMS show when he runs Saturday night’s weekly program at Selinsgrove. “We’ve had all season to get ready for it. We got a MasterSbilt (car) this year from (Maryland’s) Huey (Wilcoxon), and we’ve been working with him real close to try and get it as good as we can. I feel like we have something that’s working pretty good right now.”

Rine will have some extra incentive on Sunday because his longtime car owners, Jeff and Cathy Kurtz of Elysburg, Pa., are sponsoring the WoO LMS event through their Jeff’s Auto Body & Recycling business. It was Jeff Kurtz, in fact, who pushed Selinsgrove promoter Charlie Paige to schedule a full-fender World of Outlaws program.

“Jeff’s been talking about trying to get the Outlaws in to Selinsgrove for a couple years,” said Rine. “Everything finally worked out and Charlie (Paige) decided to go ahead with it. I think he realizes how good it can be.”

Indeed, Rine has high hopes for a race that will break new ground at a track in its 50th consecutive season of weekly racing and 67th year of competition overall.

“I think it’s gonna be real neat,” Rine said of the WoO LMS invasion of Selinsgrove. “It’s about time – like I’ve been saying, central PA is Sprint Car oriented, and now (Selinsgrove’s fans are) finally gonna get to see some real race cars.”

Rine was laughing, of course, when he made that comment.

“I don’t have anything against Sprint Cars,” he said with a smile. “I actually raced a Micro-Sprint for about three years before going the Late Model route, and I actually build (Sprint Car) wings for a living (he operates the Wing Dynamics business). We just like to have fun going back-and-forth with the Sprint Car people.”

Sunday night’s program, which will also include an appearance in WoO LMS competition by 2011 NASCAR Camping World Truck Series champion and current Nationwide Series standout Austin Dillon, is scheduled to begin with qualifying at 7 p.m. Gates are set to open at 5 p.m.

More information on Selinsgrove Speedway is available by logging on to www.selinsgrovespeedway.com or calling 570-374-2999.