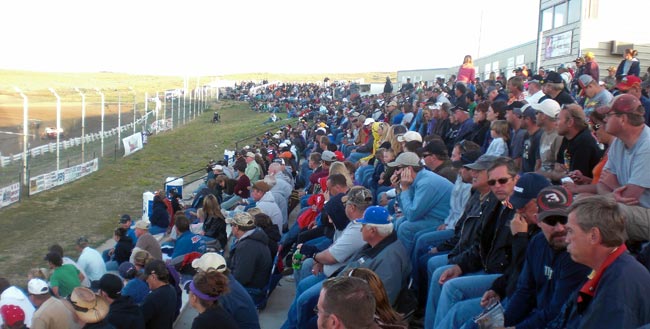 That’s a pretty solid track record for action – and with the two speedways ready to run WoO LMS shows on back-to-back nights for the first time on July 8-9, dirt Late Model fans across the region have the rare opportunity to double their full-fender World of Outlaws pleasure.

The WoO LMS ‘Wild West Tour’ is set to stop at Black Hills Speedway on Monday night (July 8) and Gillette Thunder Speedway on Tuesday evening (July 9). With history as a guide, both 40-lap, $8,000-to-win A-Mains figure to produce plenty of fireworks, side-by-side competition and late-race dramatics.

Consider the recent WoO LMS events at the two tracks….

Last year’s 50-lap affair at the sprawling half-mile Black Hills oval was a classic, a race that ranked as one of the best on the 2012 WoO LMS schedule. WoO LMS veteran Rick Eckert of York, Pa., was the overjoyed winner after pulling off a heart-stopping pass for the lead with just two laps remaining.

“That was a heck of a race there at the end,” remembered Eckert, the 2011 WoO LMS champion. “I got the lead early (lap nine), but Vic (Coffey of Caledonia, N.Y.) drove by me with a few laps to go (lap 47). I had to get back up on the wheel and drive back around him on the outside to get the lead back.”

Eckert, 47, made that winning move coming to the two-to-go signal, powering around the top amid slower cars to dash Coffey’s hopes for a coveted first-ever WoO LMS triumph. It was Eckert’s second win in as many appearances at Black Hills, backing up his 2003 UDTRA Late Model series score on the old four-tenths-mile layout that was bulldozed over and replaced by the current half-mile oval in ’07.

“It was a fun racetrack last year – big but not overly wide, and icy-slippery,” said Eckert, who enters Monday night’s program ranked fourth in the 2013 WoO LMS points standings but still looking for his first A-Main victory of the season (he has four runner-up finishes). “What really made for some good racing was that the lapped cars were so much slower and it slowed you up – kind of like a Sprint Car race. If you came up on a lapped car wrong it would bust your momentum and then you’d have to get back going again – and if you got slowed up for a second, somebody could drive by you.

“I’m looking forward to going back there. Hopefully we’ll be able to go three-for-three.”

The three-eighths-mile Gillette Thunder Speedway, meanwhile, has become known for producing some solid WoO LMS racing of its own. There has been no such thing as a flag-to-flag winner at the track located on the east side of the city of Gillette.

Remember the historic first-ever WoO LMS show in Wyoming in July 2008? The winner of that year’s ‘Cowboy 50,’ Tim Fuller of Watertown, N.Y., sure does.

“I was pretty much resigned to finishing second after (Jimmy) Mars (of Menomonie, Wis.) passed me for the lead (on lap 40),” recalled Fuller, who had led the first 39 circuits. “I think I stayed with him for a lap (Fuller actually nosed back ahead to lead lap 41), but then he started pulling away. My tires were overheated, so I was done.”

But on lap 46 a caution flag flew, giving Fuller new life. With his tires cooled down thanks to the caution period, he was able to stick on Mars’s outside when the feature restarted. The two drivers ran side-by-side for two laps before Fuller inched ahead of Mars to lead lap 49 and marched on to beat the Cheese State veteran by a mere 0.257 of a second.

“That was a pretty exciting race,” said Fuller, who enters the Black Hills/Gillette doubleheader tied for fifth in the WoO LMS points standings but saddled with a 124-race tour winless streak dating back to his last triumph on June 17, 2010, at Merrittville Speedway in Thorold, Ont. “I really like that place. It has a surface a lot like the tracks back in New York.”

The WoO LMS returned to Gillette in July 2009 and it was Darrell Lanigan of Union, Ky., who made the late-race moves. Competing that year as the defending WoO LMS champion – just like he is this season – Lanigan powered by Steve Francis of Ashland, Ky., for the lead on lap 34 of the Cowboy 50.

Lanigan isn’t wont to offering flowery descriptions of racetracks, but his drive to victory in ’09 was enough to get him to give Gillette his stamp of approval.

“It’s one of the better tracks out here in the west,” said Lanigan, who heads to Black Hills and Gillette hot off his series-leading seventh WoO LMS victory of the season in Saturday night’s NAPA Auto Parts Gopher 50 Charity Late Model Race at Deer Creek Speedway in Spring Valley, Minn. “We passed (for the lead) on the top the year we won, so you could race all over it.”

The most recent WoO LMS victor at Gillette was Shane Clanton of Zebulon, Ga., who downed Lanigan with a power move of his own in July 2011. Clanton lost the lead to Lanigan midway through the 50-lapper but then cinched up his belts and gripped the steering wheel a little harder to roar around the outside of Lanigan and regain command on lap 35.

“I didn’t want to lose that one,” said Clanton, whose victory in ’11 was his first WoO LMS triumph in a Capital Race Car he began building that year in collaboration with fellow Georgian Marshall Green. “Lanigan passed me for the lead, but then I got back up to the top and passed him back.”

“The shape of the racetrack is good and the racing surface has been good all three times we’ve been there,” said Clanton. “That’s a track we look forward to going to.”

Clanton also would like to punctuate his return to Gillette on Tuesday by partaking in a post-race tradition of the track’s WoO LMS event: the winner wearing a cowboy hat. He just wants to don a hat that fits correctly this time.

“That cowboy hat I put on when I won was too small,” Clanton said with a smile. “I got a big head, so hopefully they’ll have a bigger one if I win again.”

General admission to Tuesday night’s program, which also includes the WISSOTA Street Stocks, is $30 on race day for ages 13-and-over, $15 for kids 5-12 and free for children 4-and-under.

Race-day admission for the program, which also includes action for the B-Mods and Thunders, is $35 for ages 13-and-up, $15 for children 5-12 and free for kids 4-and-under.

Additional info is available by logging on to www.gillettespeedway.com.