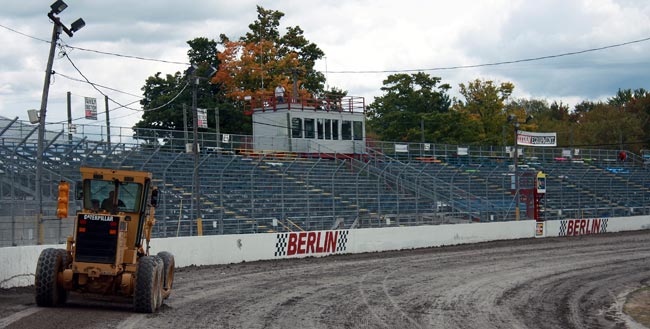 “Unbelievable!” the superstar driver from Union, Ky., exclaimed in a tone that belied his usual low-key nature. “Man, what a race!”

Yes, Lanigan’s dramatic, come-from-behind triumph one year ago was so thrilling, so memorable, that the second annual Down & Dirty 100 this weekend (Sept. 20-21) ranks as one of the most anticipated WoO LMS events of the 2013 campaign. Both racers and fans are envisioning another unforgettable showdown at Berlin, a historic 7/16th-mile asphalt oval that has been covered with over 7,000 yards of clay for a season-ending series of dirt-track races highlighted by Saturday night’s $20,000-to-win 100-lapper.

“We really set the bar so high with last year’s Down & Dirty 100,” Berlin general manager Mike Bursley said with a knowing smile. “We’ve all been joking, ‘How are we gonna top last year’s race?’ It was just such an outstanding race – there was racing all over the track from start-to-finish, and the winner wasn’t decided until the final laps.”

There were numerous storylines that developed during last year’s 100 – including early leader Shane Clanton of Zebulon, Ga., getting together with a lapped car and Tim Fuller of Watertown, N.Y., making a jaw-dropping high-side surge that nearly carried him into the lead – but Union, Ky.’s Lanigan was the ultimate shining star. After his hopes appeared dashed by a lap-30 scrape that damaged his car’s right-rear corner and dropped him from second to sixth, he came alive with a late-race charge that he capped by passing Billy Moyer of Batesville, Ark., for the lead on lap 95.

Any doubts about what kind of competition Berlin’s temporary clay surface would produce were obliterated by the intense racing that left all observers and participants praising the speedway.

“That track was amazing,” Lanigan said after capturing the first dirt event held at Berlin since 1965. “Man, we could race all over that thing. It was smooth and slick – just unbelievable.”

Lanigan even suggested that Berlin management’s successful dirt-track gamble should start a national motorsports trend: “I think they need to do this to all asphalt tracks – put dirt on top of it, and once a year we’ll go racing.”

Dirt racing on paved tracks hasn’t taken off across the country – making it happen is a huge undertaking for a speedway, after all – but it’s looking like a perfect fit for Berlin.

“It’s definitely going to be tough to match last year’s race, but there’s no reason we can’t do it,” said Bursley, who was instrumental in dreaming up the idea of returning Berlin to its dirt-track roots. “We’re going to do the best we can to provide the drivers a good racetrack so they can put on another great show for the fans.”

The transformation of Berlin Raceway from asphalt to dirt began just over one week ago when crews covered the track with the piles of clay that sat off the backstretch since being removed last fall. Wet weather delayed the start of the project but it was completed in time for a practice session last Friday and a dirt-series-opening racing program last Saturday night featuring the Allstar Performance Michigan Dirt Cup finale for DIRTcar UMP-sanctioned Late Models and UMP Modified action.

Continuing the momentum of last year’s Down & Dirty 100, both headline events of last Saturday night’s Keyser Manufacturing Fall Classic went right down to the wire. Brandon Thirlby of Traverse City, Mich., rallied from an early-race tangle that forced him to the rear of the field to win the 30-lap Michigan Dirt Cup feature with a lap-27 pass of Lake City, Mich.’s Eric Spangler, and Dona Marcoullier of Houghton Lake, Mich., captured the 25-lap UMP Modified A-Main after swapping the top spot twice with Andy Sprague of Muskegon, Mich., on the final circuit.

“The racing in all the divisions was very good,” Bursley said of the Fall Classic, which kicked off Berlin’s expanded dirt-track schedule of four events this month. “There were five different leaders in the Late Model feature – it seemed like the leader was always getting passed or having something happened to them – and that made for a great race.

“I think the racing is going to be even better this weekend when the World of Outlaws come in. Mother Nature made things difficult for us leading into Saturday night’s race, but the weather has been better the last few days so we’ve been able to work the surface more and get it buttoned up to where it should be just fine for this weekend.”

The track-prep expert credited with whipping up the universally-hailed dirt surface for last year’s Down & Dirty 100, Canandaigua (N.Y.) Motorsports Park promoter Jeremie Corcoran, will once again oversee all track work this weekend. Corcoran arrived at Berlin last Wednesday afternoon and has been tirelessly circling the oval in a grader and water truck every day.

“As good as the racetrack was last year, why wouldn’t it be the same with Jeremie coming back to work on it?” said Clanton, the WoO LMS regular who finished fourth in last year’s Down & Dirty 100 after leading laps 1-22. “Jeremie does a pretty good job with track-prep at every track he goes to. He knows how to make it hold moisture and be smooth, and that’s what he did last year at Berlin.

“I don’t think you can get a better track than we had there last year,” he added. “When you get passing from the first five laps to the last five laps, that’s a pretty good racetrack.”

Bursley has plenty of confidence that Corcoran will give the drivers the racy surface they desire. His only worry is the weather, which he’s hoping will turn out much better than the conditions that prevailed for last year’s Down & Dirty 100 weekend. Rain washed out Friday night’s scheduled qualifying program and threatened Saturday evening’s action (a shower drenched the track moments after the 100-lapper ended).

Fortunately, all forecasts are calling for a sunny and clear Saturday at Berlin.

“We fought with weather so much last year,” said Bursley. “There was rain all around us on Saturday, but we still had a real good crowd. With Saturday looking real good this year and everybody buzzing about this race, we’re expecting an even bigger crowd to come out.”

All those fans will see a star-studded roster of WoO LMS drivers led by Lanigan (defending tour champion and this year’s winningest driver) and current points leader Josh Richards of Shinnston, W.Va., who didn’t compete in last year’s Down & Dirty 100 because he was racing on the NASCAR Nationwide Series. Other Outlaws headed for Berlin are Clanton; Fuller (sixth in last year’s Down & Dirty 100 after climbing as high as second); Rick Eckert of York, Pa. (third last year); Clint Smith of Senoia, Ga. (fifth); Chub Frank of Bear Lake, Pa. (ninth); Bub McCool of Vicksburg, Miss. (18th); Tim McCreadie of Watertown, N.Y. (19th); and circuit rookies Eric Wells of Hazard, Ky., and Morgan Bagley of Longview, Texas (both first-time visitors to Berlin).

Among the drivers expected to challenge the Outlaws are past series winners Billy Moyer of Batesville, Ark. (runner-up in last year’s Down & Dirty 100), Brian Birkhofer of Muscatine, Iowa, Jeep VanWormer of Pinconning, Mich., and Shannon Babb of Moweaqua, Ill., and a host of hungry Michigan drivers that includes Spangler, Rich Neiser of Fruitport, Ryan VanderVeen of Six Lakes, J.R. Hotovy of Hartford and Curt Spalding of Watervilet.

The Keyser Manufacturing ‘Down & Dirty 100’ by NAPA weekend begins on Thursday (Sept. 19) with an open practice session from 5-8 p.m. Gates open at 3 p.m. and pit passes will cast $20 – and following hot laps, all attendees are invited to partake in a pit-area pig roast sponsored by Keyser Manufacturing.

Fri., Sept. 20, will feature time trials and heat races for the WoO LMS plus feature action for UMP Modifieds, Street Stocks, Bombers and 4-Cylinders. The finale on Sat., Sept. 21, showcases WoO LMS B-Mains and the Down & Dirty 100 as well as racing for the UMP Modifieds and Street Stocks.

Racing is scheduled to begin at 7 p.m. on both Friday and Saturday.

Discount pre-sale tickets (per night or weekend packages) can be purchased on-line at www.berlinraceway.com or by calling the track office at 616-677-5000.

Pit passes for the weekend will be $30 on Friday and $35 on Saturday.