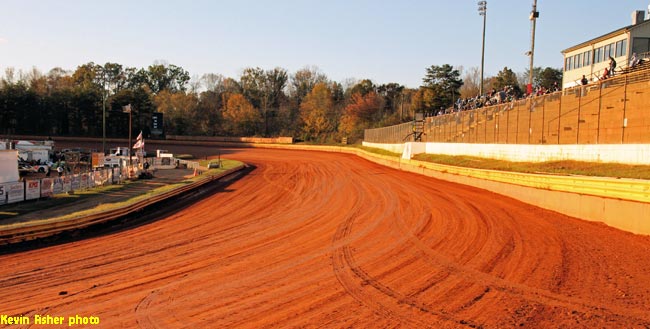 PINE HALL, NC – May 2, 2012 – The time has come for 311 Motor Speedway to explode back onto the national dirt Late Model scene.

With the running of a 50-lap, $10,000-to-win World of Outlaws Late Model Series event this Friday night (May 4), the venerable half-mile Tar Heel State oval will host a national tour for the first time in nearly a decade.

“This World of Outlaws show is the biggest thing for dirt-track racing in this area in a long time,” said 311 Motor Speedway owner Mike Fulp, who is in his second full season operating the venue located 35 minutes northeast of Winston-Salem and two hours northeast of Charlotte. “With (forecasts) talking about great weather on Friday (sunny with highs in the upper 80s and lows in the 60s), I think this can be huge for 311 Motor Speedway – a race that really showcases the track and puts it back on the map.”

A former racer who competed most recently in the dirt Late Model division, Fulp, 47, purchased 311 in September 2010. Friday’s WoO LMS program is by far the biggest and richest of Fulp’s short tenure, offering a winner’s purse more than double that of the next highest payoff over the past two years.

The event also marks the first-ever race at 311 for the WoO LMS and the track’s first national-touring series extravaganza since the defunct Hav-A-Tampa/UDTRA/Xtreme circuit visited in April 2004. The well-manicured facility near the Virginia border was actually an annual stop on the HAT/UDTRA/Xtreme tour from 2002-2004, but for the past seven years its schedule has focused on weekly racing and special shows featuring the Southeast’s Carolina Clash series.

Fulp is hopeful that the return of a high-profile tour to 311 will develop into must-see entertainment for his local fans as well as dirt Late Model aficionados from throughout the Carolinas and Virginia.

Fulp said there’s an unmistakable buzz about the World of Outlaws coming to a track he calls “bad-ass fast.” He anticipates fans will be thrilled by drivers turning sub-16-second laps around the sweeping half-mile layout.

The track won’t be familiar territory to most of the WoO LMS regulars, however. The traveler with the most experience at 311 would be Clint Smith of Senoia, Ga., who enjoyed success there during the ’90s driving for Carlton Lamm’s North Carolina-based team, but Smith’s last start at the speedway was in 2007.

For WoO LMS drivers like defending champion Rick Eckert of York, Pa., and current fourth-place points driver Chub Frank of Bear Lake, Pa., Friday’s race will be their first appearances at 311 since 2003 when they competed in HAT/UDTRA and Renegade STARS events, respectively. Shane Clanton of Fayetteville, Ga., who is third in the points race, will also return to the track after an absence of nearly a decade.

Meanwhile, for other WoO LMS followers – like points leader Darrell Lanigan of Union, Ky., former champ Tim McCreadie of Watertown, N.Y., and top Rookie of the Year contender Bub McCool of Vicksburg, Miss., who won his first tour A-Main on April 28 at Tazewell (Tenn.) Speedway – the track will be a new adventure.

Creating a challenge for the Outlaws is the fact that Friday’s field will feature several standouts from the Southeast who have proven their mettle at 311 by winning touring-series events. The group includes Chris Madden of Gray Court, S.C. (HAT/UDTRA ’03, Carolina Clash ’01); Dale McDowell of Chickamauga, Ga. (Clash ’09, HAT/UDTRA ’02); Dennis ‘Rambo’ Franklin of Gaffney, S.C. (Clash ’11 and ’09); and Billy Hicks of Mount Airy, N.C. (Clash ’05 and STARS ’94).

Pit gates at 311 Motor Speedway are scheduled to open at 3 p.m. and the grandstands will be unlocked at 4 p.m. for Friday’s program, which also includes a $1,500-to-win crate Late Model feature (311 Motor Speedway rules) and a $400-to-win Stock Four event.

Practice is set to start at 7:30 p.m. with on-track action to immediately follow.