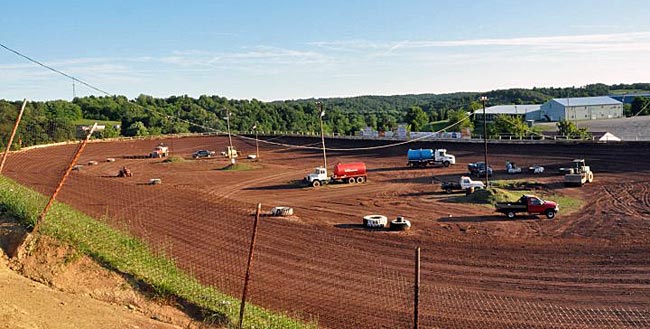 RIPLEY, WV – May 24, 2012 – The World of Outlaws Late Model Series will visit I-77 Raceway Park for the first time this Sunday night (May 27) – and for virtually all of the national tour’s travelers, it will represent new territory.

But even if World of Outlaws stars had previously raced at the Mountaineer State track, they might not recognize it when they arrive for the 50-lap ‘Ripley Race Fest’ spectacular. That’s how dramatically the facility has been rebuilt for the 2012 campaign.

An aggressive off-season reconstruction project overseen by I-77 operators Kenney Newhouse and Craig Givens has completely transformed the speedway that sits in the West Virginia hills about 40 miles north of Charleston. The shape of the three-eighths-mile was largely untouched, but the grandstands, lighting, pit area, parking lot and other facets of the track’s infrastructure were either refurbished, reshaped and/or modernized.

The new-look I-77 Raceway Park was unveiled to rave reviews from fans and racers on May 12. On Sunday KN Motorsports officials will show off their work to a larger audience by hosting the first national-level touring series event in the history of the speedway. The A-Main’s $10,000 top prize and total purse of nearly $50,000 rank as the richest ever posted at I-77.

“We’re really excited about bringing the World of Outlaws Late Model Series to I-77 Raceway Park,” said Shon Parsons, who promotes the track for Newhouse and Givens. “All the hard work Kenney, Craig and many others did to the facility was to make a race like this possible.”

Newhouse and Givens gained control of I-77 in 2009 and spent three seasons building toward this year’s major coming-out party. Construction crews moved onto the property as soon as the 2011 schedule ended last fall and worked through April. Two rainouts in a row pushed the ’12 season opener to May 12.

“We had an unbelievable first night – a great turnout of fans and an unbelievable field of cars,” said Parsons. “It was a great night of racing and the fans were really excited about all the improvements we’ve made and everything Kenny and Craig have put their heart into. The vibe around the track was just unbelievable. Everyone couldn’t believe how much work had been done.”

The most noticeable change was to the hillside grandstand, which was turned into stadium-style seating that stretches the length of the homestretch and provides sightlines allowing spectators to “see the racetrack perfectly from every seat,” said Parsons.

“We’ve also doubled our pit size to make sure we can handle these bigger races,” added Parsons. “We also changed the entire landscape of the parking and other areas, put in new lights and put new clay on the track surface to increase the fan experience.”

Parsons said the speedway’s opener produced “two- and three-wide racing all night” and the top-notch racing was evident again during the May 19 show. He expects more side-by-side action during this weekend’s Ripley Race Fest, which kicks off on Saturday night with a program for I-77’s weekly divisions before the WoO LMS rolls into town.

One West Virginia driver who’s already raced – and won – at I-77 this season backs up Parsons’s comments. Cross Lane’s Tim Dohm, who captured the track’s lidlifter on May 12, sees a competitive WoO LMS event coming on Sunday night.

“I think it’ll be plenty racy,” said Dohm, who set fast time, won the dash and controlled the feature on opening night at I-77. “I know Kenney (Newhouse) will do everything possible to give us a good track. They really and truly work the track more than about anywhere we go. There’s some tracks that hardly do anything during the week, but these guys are out there on it just about every day.”

Dohm, 51, hasn’t raced regularly at I-77 since the first couple seasons of his relatively young dirt Late Model career, which he launched at the age of 40. But the track is only 40 minutes from his home, so he usually runs there several times per year – last year, in fact, he won three specials shows – and can speak knowledgably of the speedway’s renaissance.

“They spent a lot of money to fix that place up,” said Dohm, who has three top-10 finishes in 10 career A-Main starts on the WoO LMS. “There’s no way most people could’ve afforded to move as much dirt (for reconstruction) as they have, but Kenny has a construction company so they were able to bring some big equipment out there.

“It looks good, real good. I don’t think the track’s a whole lot different – they may have put a little more banking in it and they put some new dirt on it – but they really fixed everything else up. The biggest thing is they made the pits a whole lot bigger, so now there should be no problem parking all the big haulers for the World of Outlaws show.

“They’re really making something of the facility,” added Dohm. “You have to give them an ‘A’ for effort. They like racing, they’re trying hard, and hopefully they’ll get the support they need to make some money back on these big races they’re having.”

With his experience at I-77, Dohm stands as one of the most likely drivers to seriously challenge the WoO LMS stars on Sunday night. He will be behind the wheel of his own MasterSbilt car as he attempts to turn back a talented World of Outlaws roster that features points leader Darrell Lanigan of Union, Ky., defending champion Rick Eckert of York, Pa., Chub Frank of Bear Lake, Pa., Shane Clanton of Fayetteville, Ga., and Tim McCreadie of Watertown, N.Y.

More details on the historic WoO LMS event at I-77 Raceway Park can be obtained by visiting the track’s website at www.racei77.com or calling 304-373-1110.