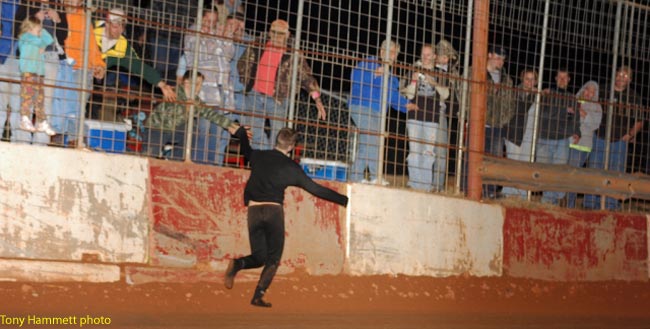 Can the teenage sensation from Seaford, Del., produce an encore when the national tour returns to the three-eighths-mile Georgia oval this Saturday night (March 26) for a 50-lap, $10,000-to-win A-Main? He’s sure going to try.

Hubbard, 19, has a deep affinity for the track where he earned his first career WoO LMS triumph – and performed a Ricky Bobby-in-Talladega-Nights run down the homestretch after climbing out of his race car and firesuit – almost exactly one year ago, so he’s as confident about his chances for success there as anywhere he’ll visit this season.

“I’m definitely ready to go to Screven,” said Hubbard, who rolled to the 2010 WoO LMS Rookie of the Year award driving veteran Maryland car owner Dale Beitler’s familiar blue-and-white Reliable Painting Rocket No. 19. “It’s one of my favorite tracks for sure. I liked it the first time we were there in our own car (for the 2009 WoO LMS event), and I loved it when we went back last year with Dale’s car.”

Last year’s WoO LMS show at Screven was a magical evening for Hubbard – and those watching from the packed grandstands. He added his name to the tour’s alltime win list in impressive fashion, sweeping the program by setting fast time, winning a heat race and capturing the A-Main after passing 2007 WoO LMS champion Steve Francis of Ashland, Ky. – the veteran driver Hubbard replaced in Beitler’s equipment – for the lead on lap 30.

With World of Outlaws announcer Rick Eshelman informing the fans that Hubbard might do something spectacular in Victory Lane if he were to win, the crowd rose and cheered the energetic kid to the checkered flag. Hubbard commented later that he could literally feel how much the fans were on his side.

“I heard the crowd when I took the lead,” said Hubbard, who held off reigning WoO LMS champion Josh Richards of Shinnston, W.Va., in the final laps of the race. “I could hear everybody clapping and see everybody standing. I waved out the window to ’em when I saw them all standing.”

Hubbard paid homage to the patrons again with his entirely unique celebration. Overjoyed after breaking through for his first win in just the fourth event of the national tour’s 2010 schedule, he scrambled out of his cockpit after stopping on the homestretch, removed his fireproof uniform, long-sleeve shirt and shoes and – harkening Will Ferrell’s Ricky Bobby character in Talladega Nights – ran down the homestretch wearing only his long underwear, helmet and socks.

Screven’s fans roared as Hubbard rolled in the mud on the inside of the track and then jogged along the homestretch wall to high-five them through the catch fence. Dozens of fans then headed to the souvenir area and waited patiently for Hubbard to pay a visit to the ASI Racewear trailer for an impromptu autograph session.

“The fans were just awesome,” said Hubbard. “I couldn’t have asked for a better crowd that night. They were so supportive and everybody was so nice, and everybody loved the Ricky Bobby thing and had a lot of fun. It was just an awesome night.”

Screven’s owner and promoter, Redd Griffin, was one of the spectators swept up in the memorable moment.

“That was cool,” Griffin said of Hubbard’s uninhibited antics. “I remember congratulating him after he did his little celebration and he told me, ‘Man, I didn’t know that Georgia red clay is that hard!’ He said he about knocked the wind out of himself when he rolled around on the track.

“That kid got everybody around here talking about Screven Motor Speedway. Everybody’s gonna want to see if he can win and do it again – and I think he can. He can wheel around Screven.”

Indeed, Hubbard has a sterling performance record at Screven. In addition to his victory, he finished sixth in the 2009 WoO LMS event as a 17-year-old driving his father Mike’s car and last month he won a heat race during the oval’s ‘Winter Freeze’ program before it was postponed by rain.

“It’s a challenging place and I like that,” said Hubbard. “(Turns) one and two are different from three and four. In one and two, you gotta get this nice angle getting in and you can gas right across the whole turn. It’s cool trying to figure out which angle is right; you’re going so fast down the straightaway and then you gotta completely shut it down for that turn. Three and four are like a big, sweeping turn where you can run through it pretty wide open; I like being in the gas, so it kind of fits me.”

Hubbard enters this weekend’s action as a driver who appears to be taking a step forward in his development. He has two top-five finishes in three WoO LMS A-Mains – including a solid fifth-place run in last Saturday night’s ‘Cash Cow 100’ at Columbus (Miss.) Speedway – and is the highest-ranked tour regular in the current points standings, sitting third overall.

While Hubbard won a second WoO LMS A-Main last year en route to a seventh-place finish in the points standings, that triumph, in July at North Dakota’s River Cities Speedway, came in a rain-shortened race that had no Victory Lane ceremony. He didn’t have a chance to provide fans a Ricky Bobby display that evening, so he’s more than ready to show some skin again.

“After that (first win) last year everybody asked every night what I’d do if we won, so I’m sure I’ll get that all night at Screven when we go back,” said Hubbard. “I’d love to do something again for the fans, but first we gotta worry about trying to win a race. Hopefully (a Ricky Bobby celebration) is overdue.”

Other drivers with the event on their schedules are 2010 DIRTcar Summer Nationals champion Jason Feger of Bloomington, Ill., Tony Knowles of Tyrone, Ga., Ivedent Lloyd Jr. of Ocala, Fla., and area standouts such as Chesley Dixon of Swainsboro, Ga., Casey Roberts of Toccoa, Ga., and brothers Ben and Jeremy Faircloth of Swainsboro, Ga.

In addition, Billy Moyer of Batesville, Ark., who leads the WoO LMS points standings after three events but is not planning to follow the entire schedule, confirmed on Wednesday that he is entering this weekend’s WoO LMS tripleheader that includes Screven and events on Fri., March 25, at Ocala (Fla.) Speedway and Sun., March 27, at Needmore Speedway in Norman Park, Ga. He will be joined at the three events by Henderson Motorsports teammates Leon Henderson of Laurel, Miss., and David Breazeale of Four Corners, Miss.

Grandstand admission is $20 and children 12-and-under will be admitted free for a program that also includes Screven’s Street Stock V8, Mini-Stock and Renegade divisions. With the economical ticket price, Griffin has established the event as one of the biggest bargains of the 2011 WoO LMS.

Screven Motor Speedway is located between mile markers 6 and 7 on Hwy 21 North near Sylvania, Ga.