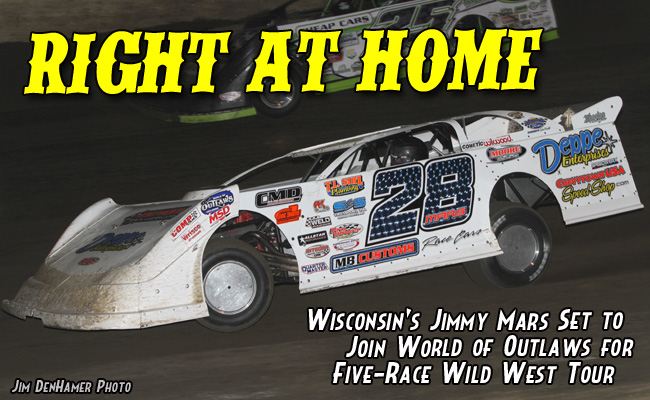 Jimmy Mars doesn’t get the opportunity to race with the World of Outlaws Late Model Series nearly as much as he would like, but he makes up for that when the national tour visits his home region each summer for its Wild West Tour.

Mars, the 43-year-old veteran racer from Menomonie, Wis., will once again join the WoO LMS for its annual western trek, beginning with Thursday’s Wild West Tour opener at Hibbing (Minn.) Raceway. The five-race stretch then heads to North Dakota, Wyoming and South Dakota before returning to Minnesota for the finale on July 18 at Deer Creek Speedway in Spring Valley, Minn.

“I love to run with the World of Outlaws as much as I can, but it’s hard for us to drive to all those races with our shop here in Wisconsin,” said Mars, who in addition to his standout driving career produces the MB Customs chassis brand with his brother and crew chief Chris in their full-service race shop. “We always look forward to when the series comes up here in our area. A lot of these tracks we kind of grew up running. They’re pretty good tracks, and we have fans at most all of them.”

Mars has had his share of success at the tour’s western-most tracks, with three of his seven-career WoO LMS victories coming on the Wild West Tour. Last season he won the opener at Hibbing, thrilling a large crowd that turned out for the 3/8-mile track’s first-ever WoO LMS race.

One of the reasons the Wild West Tour is so appealing to Mars is the opportunity to race against some of the nation’s top drivers at tracks in his area. Of course, that also presents its challenges. To have another successful western trip, Mars will have to once again overcome a talented group of WoO LMS regulars, led by points leader Shane Clanton of Zebulon, Ga.

With three victories in the tour’s past five races and a total of seven WoO LMS wins on the season, Clanton enters the western swing with plenty of momentum. But Mars knows how to cool off other drivers’ hot streaks. In winning last year at Hibbing, Mars outdueled Darrell Lanigan, the three-time WoO LMS champion who entered the 2014 Wild West Tour riding a streak of three wins in four races.

“Just because someone’s winning a lot of races doesn’t mean you can’t beat them,” said Mars, who added three more top 10s on last year’s Wild West Tour to go along with his Hibbing victory. “Clanton’s definitely got things going his way right now, but that doesn’t mean we can’t go out and beat him on this deal. We go out to win each night no matter what’s been going on in the month or however long leading up to it.

“You know Lanigan was on a hot streak last year, and we beat him there at Hibbing. We were one of the few that did beat him during his hot streak. I think our team is more than capable of taking on anybody in the country. We might not get to travel all over and run the full series like I would like to, but I feel like we can run with anyone.”

Following Thursday’s opener at Hibbing, the Wild West Tour continues Friday evening with a visit to River Cities Speedway in Grand Forks, N.D. Although he doesn’t consider River Cities a great fit for his driving style, Mars typically runs well at the 3/10-mile oval. He’s entered seven of the track’s eight WoO LMS races since 2007 and has never finished worse than ninth. He’s never won at River Cities but has a pair of runner-up WoO LMS finishes.

“It’s definitely a unique track,” Mars said. “I don’t feel the most comfortable running there, but at the same time we’ve ran good there. It’s definitely got a unique character to it that can make it tricky to get around there some times.”

After back-to-back nights to start the Wild West Tour, the series takes three nights off before returning to action with another set of back-to-back race nights at Gillete (Wyo.) Thunder Speedway on Tues., July 14 and Black Hills Speedway in Rapid City, S.D. on Wed., July 15. Gillette Thunder, a 3/8-mile oval located in Wyoming’s northeast corner, hosts its first WoO LMS event since 2013, while the event at Black Hills marks the half-mile track’s first series race since 2012.

Of all the Wild West Tour venues, Gillette and Black Hills are the two that Mars has visited the least – Black Hills is more than 10 hours from his shop while Gillette is another two hours farther west. Like the WoO LMS regulars, he’s excited for the series to return to both tracks.

“It’s been a long time since we’ve been out there, but both Gillette and Rapid City are good tracks,” said Mars, who finished ninth in Black Hill’s previous WoO LMS event in 2012 and scored a best finish of second at Gillette in 2008. “I’m glad the (Wild West Tour) is going back out there this year and giving us a chance to go out there for a couple of big races.”

The Wild West Tour wraps up with one of the Upper Midwest’s longest-running Dirt Late Model events in the 36th annual NAPA Auto Parts Gopher 50 at Deer Creek Speedway. Mars has performed well in the prestigious race in the past, finishing among the top 10 in the event every year since 2008. But he’s still looking for his first Gopher 50 victory.

“It’s definitely a race I’ve always wanted to win,” Mars said. “We’ve won some Wissota shows at Deer Creek, but we’ve never won the Gopher. It’s a tough track to figure out. It’s one of those places where you get your setup right for it, you put it in your notebook and only pull it out when you go there. It’s just a different kind of track.”

While Mars may be more familiar with the tracks he’ll visit on the Wild West Tour than many of the WoO LMS regulars, he doesn’t believe that gives him any kind of home-track advantage. But that’s just fine with him.

“I don’t think you ever really have much of a home-track advantage or anything like that when you’re racing against the quality of drivers like the World of Outlaws,” Mars said. “Most of those guys are just like me, you have tracks that you’re pretty good at and others where you aren’t so good. Sometimes, the good tracks are places you only go to every now and then and the tracks you struggle at are right down the road.

“It’s really more a matter of how a track fits you than it is how much experience you have there. But it really doesn’t matter what track we’re racing at or who we’re racing against. Every track we go to, we have the mindset that we’re there to race to win or else we wouldn’t be there.”

Hibbing Raceway – Hibbing, Minn. (Thurs., July 9): Pit gates open at 3 p.m. with general admission gates opening at 4:30. Racing starts at 7. General admission tickets are $30 with children 6-12 $15, and children 5 and under free. Pit passes are $40. More information is available at www.hibbingraceway.com.

River Cities Speedway – Grand Forks, N.D. (Fri., July 10): Hot laps kick off the action at 6:30 p.m. with racing slated for 7. Tickets are available now by calling 218-773-3001. Advanced general admission prices are $28, while general admission will cost $30 at the race. Children 12 and under are $15. Visit www.rivercitiesspeedway.com for more information.

Gillette Thunder Speedway – Gillette, Wyo. (Tues., July 14) & Black Hills Speedway – Rapid City, S.D. (Wed., July 15): Gates open at 5 p.m. at both events with racing at 7. Advanced tickets can be purchased for either race for $25 at Tire Rama in Gillette or Black Hills Harley in Rapid City. Tickets are $30 on the day of each race with children 6 and under admitted for free. Call 605-209-2028 for more information.