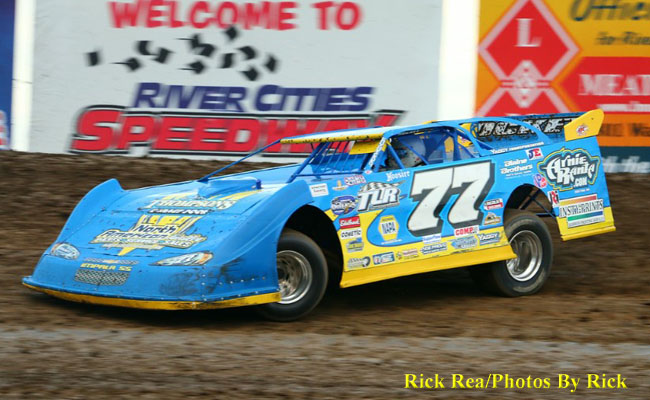 Yaggy, a standout among WISSOTA’s spec-engine Late Model division who had entered roughly a dozen open-engine Late Model events prior to the Wild West Tour, performed well in his return to the driver’s seat, making the A-Main lineup at all four events during the national tour’s annual trek through the Upper Midwest.

At Friday’s Wild West Tour finale at River Cities Speedway in Grand Forks, N.D., Yaggy reflected on what he called a learning experience in his transition to Super Late Model competition.

“It’s always fun when you get a chance to go run with these Outlaws guys because you definitely learn a lot at a fast rate,” said Yaggy, who had just one WoO LMS A-Main start prior to the Wild West Tour. “This open-motor stuff has been an adjustment, but I feel like we’re catching on to it like we need to be. Getting to race with these guys like this really helps.”

Yaggy’s most impressive Wild West Tour performance came during the opening round event July 10 at Hibbing (Minn.) Raceway. In his first competitive laps since his surgery, Yaggy topped 43 qualifiers and won a heat race. But after missing the setup on his family-owned Rocket Chassis, Yaggy faded from his seventh starting spot to a 21st-place finish in the 50-lap feature.

The other three Wild West Tour races followed a similar pattern with Yaggy performing well in prelims only to fade in the main event. His best finish was 15th at Brown County Speedway in Aberdeen, S.D., on July 15.

Yaggy, who added finishes of 22nd at Deer Creek Speedway in Spring Valley, Minn., on July 13 and 20th at River Cities, noted that the layoff from his surgery likely affected his main event performances.

“Come feature time, as far as making decisions on what to do to the car, I think I was a little behind because of the time off,” said Yaggy, who underwent the surgery to correct previous injuries related to playing hockey and snowmobiling. “Time trialing and heat races went pretty good, but we just didn’t keep after it as far making adjustments.

“We had a couple good runs with qualifying and stuff, but we’ve gotta get better at the features because that’s where the money gets paid out. But at least we really learned a lot and have something to build on for the future.”

Yaggy is anxious to apply what he learned on the Wild West Tour as the WoO LMS prepares to return to his home region for three upcoming events. Yaggy will join the series for races at Independence (Iowa) Speedway on Thursday, July 24 and Shawano (Wis.) Speedway Tuesday, July 29 before tackling the USA Nationals at Cedar Lake Speedway in New Richmond, Wis., July 31-Aug. 2.

With the Wild West Tour experience under his belt, Yaggy is optimistic about the upcoming events, especially the USA Nationals, where he’ll make his second appearance in Cedar Lake’s $50,000-to-win crown jewel event.

“It’d be really cool to make a big show like that,” said Yaggy, who was hampered by mechanical woes during his first USA Nationals appearance last season. “You get better any time you can run around with these guys, pick their brains and get used to driving at their pace. They bring it every lap every night, so hopefully we can head into Cedar Lake with a little momentum and if things fall our way it’d be really cool to make the show.”

MISSION IMPOSSIBLE: On an extended trip like the Wild West Tour, some WoO LMS teams choose to bring on an additional crew member to help handle extra work on the road. That wasn’t the case for former series champion Tim McCreadie.

With crewmember Johnny Cocco leaving the team just before the tour, the Watertown, N.Y.-based Sweeteners Plus team set out for the opener at Hibbing with a skeleton crew of only McCreadie and truck driver Dave “Frogman” Griepsma.

As the nine-day stretch wrapped up Friday at River Cities, McCreadie was proud to not only make it through the trip but to also perform well.

“It’s really just been me and him trying to do the impossible,” said McCreadie, who recorded runner-up finishes at Hibbing and River Cities and a third-place effort at Brown County. “We’re racing against guys that have four or five pit guys. We’re actually outrunning some of them and were as good as any of them. That’s definitely something for us to be proud of.”

While Griepsma may not be a race car mechanic by trade – the Sweeteners Plus employee was recently brought on to drive the team’s hauler – he stepped up to help McCreadie get through the trip. Even so, McCreadie still found himself wishing he had more help.

“He does help a lot and he’s been great,” McCreadie said. “But it’s just like anything; it’s nice as the driver not to have to do all the tire work and not to have to put gears in the car and things like that when I could be looking at the racetrack.

“In a way, it works out because I’ve gotten way more focused on how to make my car better because I don’t have time to really talk to anybody or shoot around. I really only have time to concentrate on the car, so maybe it’s better this way.”

McCreadie was helped along the way by the generosity of other teams, including when the Rocket Chassis house car team helped him swap engines following the Wild West Tour opener at Hibbing.

“The good part of it is we broke a motor the other night, and that guy right there and his whole race team stayed and helped me change it,” McCreadie said as he pointed over to Mark Richards and the Rocket Chassis crew in the pit spot next to his at River Cities. “Brady Smith has helped us this week and Tim Fuller’s guys have helped us when we’ve been in a hurry to do things. Everybody in this pit area will help you out if they can. That’s the good thing about Late Model racing.”

FINALE IMPROVEMENT: After disappointing results through the first three rounds of the Wild West Tour, a switch to his backup car proved to be just what Shane Clanton needed to turn his luck around in Friday’s finale at River Cities. Looking for his first series victory in over a year, Clanton won his heat race Friday night and ran among the leaders for the first half of the A-Main before settling into fourth at the finish.

“We changed cars today, just trying to change our luck a little bit,” said Clanton, the Zebulon, Ga., driver who struggled through a disappointing first half of the season. “Our car was way better tonight than it’s been being, so hopefully we can build on tonight and keep it going.”

The solid run at River Cities not only provided a decent finish to an otherwise forgettable Wild West Tour, it also gave Clanton just his third top-five finish in a WoO LMS event this season and his first since Mid-April.

The long-time series regular will now look to use the momentum of the River Cities run as a jumpstart for what he hopes is a much more productive second half of the season.

“Any time you run good you feel better,” said Clanton, who’s currently seventh in the WoO LMS points standings. “It gets everybody’s hopes up that you’re gonna start winning races. Hopefully we can get rolling and win a few soon.”

RACE WITHIN A RACE: As he prepared to compete in Friday’s event, Bill Mooney of Selkirk, Manitoba, acknowledged that his chances of winning the night’s WoO LMS A-Main were slim. But that didn’t mean that Mooney, the Canadian driver who’s a frequent competitor in River Cities’ weekly WISSOTA Late Model division, was taking the event lightly.

Though his WISSOTA spec-engine put him at a significant horsepower disadvantage, Mooney still had plenty of reason to keep his competitive edge with his goals set on making the A-Main lineup and finishing highest among the track’s regular competitors.

“Hopefully we all make the show, but it is kinda our own race within a race,” Mooney, a five-time champion of WISSOTA’s Canadian region, said before the start of Friday’s program. “To expect to run up front with these guys is really unrealistic, but we’d like to make the show and maybe win that race against the other local guys.”

Mooney didn’t ultimately win the race among area’s weekly racers – hometown driver Dustin Strand was the only local driver ahead of him in 15th. But he accomplished his goal of making the A-Main and finished a respectable 18th.

By making the main event, Mooney also accomplished another goal of promoting his sponsors in front of the large crowd attending the race.

TRAVELING BUDDIES: Jordan Yaggy was joined on the Wild West Tour by veteran Winona, Minn., driver Lance Matthees. The two teams joined forces for the tour, working out of Yaggy’s hauler and acting as unofficial teammates.

“We’re more or less teammates anyway,” said Matthees, who made all four Wild West Tour A-Mains with a best finish of ninth at Deer Creek Speedway. “We get along great so it just made sense to kind of team up so we could both do this deal.”

NEVER GIVE UP: After his stellar performance with the WoO LMS during February’s Florida Speedweeks, Brady Smith of Solon Springs, Wis., entered the Wild West Tour hoping to be a contender at all four events. But his efforts were hampered at the first three races with his only top-10 result coming in the form of a seventh-place finish at Hibbing.

Smith finally got things turned around at River Cities, where he battled with Tim McCreadie for the lead early in the feature before topping Shane Clanton and Darrell Lanigan in a back-and-forth battle to finish third.

“You just gotta keep digging when things are going bad like that,” Smith said. “Your luck’s not gonna change if you give up on it.”