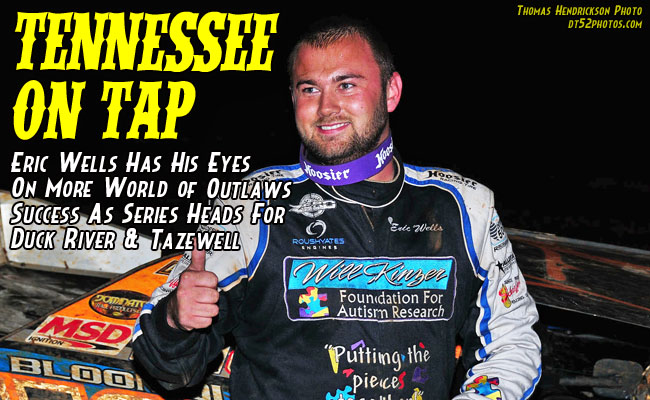 Besides finally returning to WoO LMS action after Mother Nature forced the national tour into a nearly two-month break following February’s season-opening stretch of racing in Georgia and Florida, Wells is eager to race at two tracks where he’s had plenty of past success.

Duck River, which welcomes the WoO LMS for the third consecutive season for Friday’s $10,000-to-win event, will always be a special place for Wells. The tight quarter-mile oval was the sight of the 26-year-old Hazard, Ky., driver’s first WoO LMS victory two years ago.

“I always look forward to both Duck River and Tazewell because they’re both fun tracks to race and fairly close to home,” said Wells, whose shop in eastern Kentucky is roughly a five-hour drive from Duck River and just two hours from Tazewell. “I’m definitely excited to get back out and get back racing after this break we’ve had. We’d love to get another win, but right now we just want to keep our consistency going.”

Just 12 races into his WoO LMS rookie season, Wells was running fourth when a late pileup took out the top three drivers and put Wells in the lead. Wells capitalized on the opportunity and held off three-time WoO LMS champion Darrell Lanigan of Union, Ky., to score his biggest career victory.

“We were in the right place at the right time,” said Wells, who went on to claim the WoO LMS Rookie of the Year Award that season. “People say they’d rather be lucky than good. A lot of luck played into it, but we had to be good too because I had Lanigan behind me on that restart. We held him off and made it a really special night.”

The two solid runs capped an otherwise disappointing trip south for Wells. After switching from Rocket Chassis back to the Team Zero by Bloomquist Race Cars he ran in 2013, Wells and his Wells Motorsports team struggled to readjust to the older cars in the year’s opening five races before finally getting the car dialed in late in the week at Volusia. Wells will look to use what he learned during those two runs to continue his climb out of the hole from his early-season struggles.

“The first of the year we tried some different stuff and it just didn’t work out for us,” said Wells, who is currently 10th in WoO LMS standings, 190 points behind leader Shane Clanton. “We got back to standard stuff at the end of the week there at Volusia and the car was a lot better.

“I feel like we’ve hit on some things and we’re gonna be pretty good in these cars. Now we’re gonna take what we learned in Florida there at the end of the week and see if we can apply it to some of these other tracks.”

Despite the slow start to the season, Wells has high hopes for his 2015 WoO LMS campaign. In his third year on tour, Wells hopes to improve on his back-to-back sixth-place finishes in the series standings. He knows two more strong runs at Duck River and Tazewell will help him in doing that.

“I think we’re definitely more confident in what we’re doing,” said Wells, who has yet to return to WoO LMS victory lane since his breakthrough at Duck River two years ago. “This Outlaws deal is tough and the wins are hard to come by, but we’re not ready to give up.

“I feel like we’re getting better and we’re gonna be where we can run with these guys night in and night out before long. Hopefully we can do that in these races coming up and keep our momentum going.”

Duck River Raceway Park has been in operation since 1973. Track owner Bob Harris of nearby Shelbyville, Tenn., purchased the track in 2012 and has worked to modernize the surrounding facility to meet the demands of larger crowds and bigger races. Recent improvements include the building new bathrooms, remodeling of the concession stands and the addition of new dirt to the track surface. David Seibers of Petersburg, Tenn., holds the track’s Super Late Model track record with a lap of 11.96 seconds.

Tazewell Speedway was built in 1965 and has earned a reputation of producing action-packed racing on its famous high banks. Rick Rogers of Knoxville, Tenn., was the first driver to crack the 10-second barrier around the track in 2009. Jeff Wolfenbarger, also of Knoxville, established a new track record just a few weeks later with a lap of 10.947 seconds. That record stood until 2013 when Scott Bloomquist of Mooresburg, Tenn., lowered the record to the current mark of 10.822 seconds.

For more information on the event, visit Duck River’s website at www.duckriverracewaypark.com.

Another complete program of WoO LMS action will be contested at Tazewell’s Ray Varner Ford 50 on Saturday with another $10,000 going to the winner. Support divisions for the night will be sportsman, classic cars, four cylinders and super stocks.

Visit the track’s website at www.tazewellspeedway.net for more information.

Duck River lived up to its reputation of dramatic finishes in its first WoO LMS event in 2013 with a late-race incident taking out the top three drivers and paving the way for Wells’ breakthrough win.

After turning back early challenges from Dillon Wood of New Smyrna Beach, Fla., three-time WoO LMS champion Josh Richards of Shinnston, W.Va., controlled the race’s middle portions before tangling with the lapped car of Mark Gant of Savannah, Tenn., on lap 47 of the 50-lapper.

The ensuing melee swept up second-running Scott James of Lawrenceburg, Ind., and third-place Rick Eckert of York, Pa., and handed the lead to 12th-starting Wells, who then held off Lanigan in a dash to the finish.

Lanigan improved his finishing position by the needed one spot to claim the victory when the WoO LMS returned to Duck River in 2014, outdueling fellow series veteran Tim McCreadie of Watertown, N.Y. The win was Lanigan’s fourth of what would end up being a record-setting 17-win season for the eventual 2014 WoO LMS champion.

Tazewell first hosted the WoO LMS in 2010 and has hosted the series every year since except for a rainout in 2013. Current WoO LMS points leader Shane Clanton of Zebulon, Ga., claimed the inaugural WoO LMS event at Tazewell, leading every lap for a decisive victory in 2010.

Chris Madden of Gray Court, S.C., scored a $20,000 payday in the 2011 WoO LMS event at Tazewell, topping Jonathan Davenport of Blairsville, Ga., in the only running of the Outlaw Sizzler 101.

Tazewell’s two most recent WoO LMS events have both produced first-time WoO LMS winners with Bub McCool of Vicksburg, Miss., leading every lap of the 2012 event in a caution-free race that remains the quickest 50-lap WoO LMS event ever completed at 10 minutes, 47.989 seconds. Mike Marlar of Winfield, Tenn., took command of the 2014 race when McCreadie slowed with a flat tire on lap nine and lead the remaining 41 laps for his first WoO LMS victory.