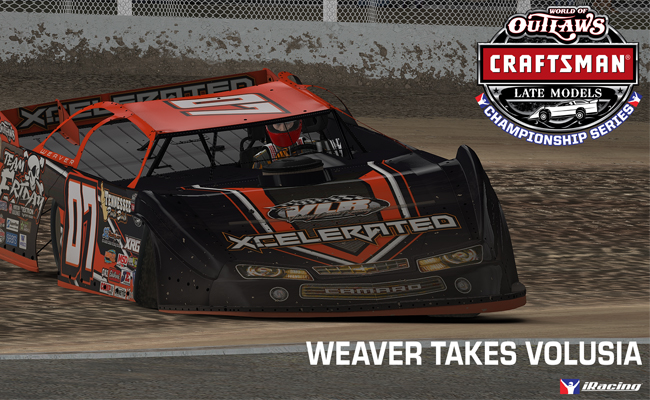 The opening round of the new iRacing World of Outlaws Craftsman Late Model Championship Series brought us to Volusia Speedway Park, one of the most unique tracks on the iRacing service. The short straights, sweeping corners, and specifically the curved back straight away challenges many competitors.

With that said, the season opener was expected to be a brilliant race, and it delivered.

The first four heat races featured hard but mostly clean driving, demonstrating that these guys were here for the big show. Drivers in transfer spots early raced smart. The back half of the field took more chances. Multiple grooves widened the track as the race went on, which gave us plenty of three-wide action.

The Last Chance Qualifier is where the track really came in. Drivers began moving up the track looking for speed, but some drivers were able to hook up the bottom for some heated side-by-side racing. It was an early breakaway in the top five. David Heileman was agonizingly close to grabbing a transfer spot after a disappointing sprint car opener. However, at the end, Ricky Thornton, Mike McKinney, Virgil Graham, and Austin Carr would take the last two rows in the 20-car main event grid.

The Feature was dominated early by teammates Howard Weaver and Garrett Niebruegge. They comfortably ran away from the field for the first 15-or-so laps, but a caution caused in the mid-pack would stack everyone back up again.

The restarts in the midpoint were a struggle for Niebruegge, who went from looking like he had a comfortable second place to getting shuffled back into the depths of the field after a bad restart. He was later involved in an incident with about 15 to go.

The late race restart allowed James Edens to make a last race charge on Howard Weaver, who had been able to stay clear of the melees behind. However the 07 of Weaver was flawless and didn’t succumb to the pressure. Edens was only able to have one shot of making a move into turn 3 for the final lap, but it wasn’t nearly enough which crowned Howard Weaver as your winner.

One of the topics during the prerace coverage was drivers who showed pace in both the Sprint Car Championship and the Late Model Championship, and Howard Weaver could not be a more perfect example. A seventh place run at Eldora in the Sprints and a win at Volusia in the Late Models shows his multi-car talent, despite identifying himself as a Late Model specialist.

It will be interesting to see if he can keep up this performance in both series. The World of Outlaws Craftsman Sprint Car Championship returns May 21st as they take to the Dirt Track at Charlotte at 9PM Eastern, and the Late Models will have their second race at the 1/4-mile track at Limaland on May 28th. Both tracks are the two most recent additions to the iRacing dirt oval content and are sure to put on an exciting show. Be sure to catch the iRacing action presented by Racespot TV on iRacing Live and on DIRTVision.