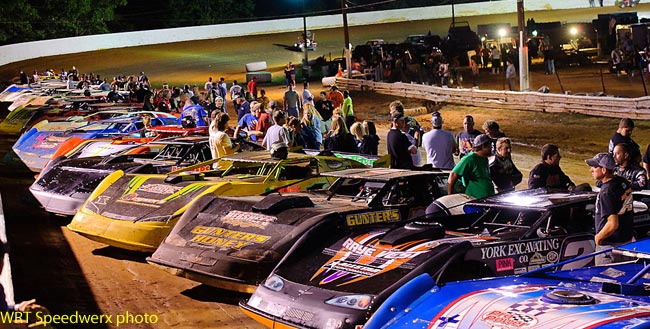 WINCHESTER, VA – May 11, 2011 – There’s two drivers who are very enthused about this Saturday night’s (May 14) first-ever World of Outlaws Late Model Series event at Winchester Speedway.

And those racers – veteran standout Rick Eckert of York, Pa., and young star Josh Richards of Shinnston, W.Va. – happen to occupy the top-two positions in the national tour’s points standings.

The WoO LMS’s points leaders figure to be consensus favorites to pocket the $10,000 winner’s prize in Saturday’s Gunter’s Honey Spring 50 at Winchester, a revitalized one-third-mile oval where they’ve both experienced plenty of success. Their odds are only pumped up by the current states of their racing fortunes – Eckert, 45, won his first A-Main of the season on May 7 at Swainsboro (Ga.) Raceway and sits atop the points standings, while Richards, 23, is due for a victory after uncharacteristically going winless through the first nine events of 2011.

“We’re looking forward to racing close to home at a track we know pretty well,” said Eckert, who ended last weekend’s doubleheader in Georgia leading Richards by 20 points in the standings. “We’ll be going to Winchester at a pretty good time. We just had our best weekend of the year, so hopefully we’ll be able to keep the roll going.”

Eckert made three starts at Winchester last year, capturing the Appalachian Mountain Speedweek show in June and later recording finishes of third (September’s Winchester 200) and 10th (October’s Raye Vest Memorial honoring Eckert’s longtime car owner). He’s been winning at Winchester for two decades, including triumphs in the dirt Late Model portion of the track’s fall classic, the Winchester 200, in 1992 and 2000.

Bagging the inaugural WoO LMS event at Winchester would certainly set off a huge post-race celebration for Eckert, who will have a large contingent of family members and friends watching him from the concrete grandstand. He lives roughly two hours from the track.

Richards, meanwhile, enters Saturday’s program with perhaps the best performance record of any driver at Winchester over the past year. He won five times there in 2010 – a spring Three State Flyers Series event, the dirt Late Model segment of the Winchester 200 and the Raye Vest Memorial plus preliminary features during the 200 and Vest weekends – and already owns an ’11 victory in the track’s headliner on April 9.

Yes, Richards has found the fast way around Winchester, a track that has been gaining respect in regional racing circles since it was purchased in 2009 by Greg Gunter. A dirt Late Model team owner who operates the Gunter’s Honey business in Berryville, Va., Gunter has invested in a rigorous series of capital improvements at Winchester – work that has impressed Richards.

“We’ve had a lot of success there the last three or four years,” said Richards, the two-time defending WoO LMS champion. “I really enjoy racing there. It’s really become awesome to race on. They’ve brought it a long way from what it used to be. They’ve done an awesome job making improvements to it and making it racier. It’s becoming one of the better places in the area to go to.”

Of course, Richards will have to make one adjustment when he hits the track at Winchester on Saturday. After scoring all his wins there in recent years driving the Ernie Davis-owned Rocket No. 25 – a machine he runs in selected non-WoO LMS events – he’ll be behind the wheel of his father Mark’s familiar blue Rocket No. 1.

“Hopefully we’ll be able to transfer over to our car everything we’ve learned running Ernie’s car there,” said Richards. “I know we have a good idea about what to do there. I’ve really gotten comfortable at that place. I love running there.”

The field will also feature talented challengers from throughout the region, including Jason Covert of York Haven, Pa., who won the Lee Stultz Memorial at Winchester on May 7; Jeremy Miller of Gettysburg, Pa.; D.J. Myers of Greencastle, Pa.; Gregg Satterlee of Rochester Mills, Pa.; Dan Stone of Thompson, Pa.; Jamie Lathroum of Mechanicsville, Md.; and Winchester’s Ronnie DeHaven Jr.

General admission for Saturday’s racing program, which also includes Winchester’s Pure Stock and U-Car divisions, is $30 for adults and $5 for kids 6-12. Pit passes are $40.

Pit gates will open at 2 p.m. and spectator gates will be unlocked at 3 p.m. Hot laps are scheduled to begin at 6 p.m. and time trials will commence at 6:30 p.m.