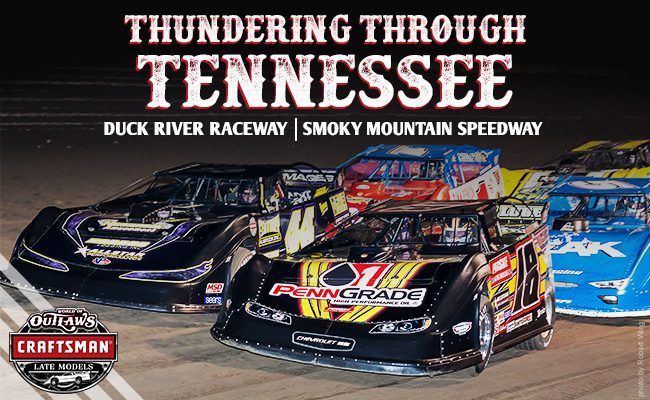 CONCORD, NC— April 21, 2017— The World of Outlaws Craftsman® Late Model Series brings 15 full-time drivers and their 850-horsepower machines to echo through the mountains of Tennessee with back-to back 50-lap $10,000-to-win events at Duck River Raceway on May 12 and Smoky Mountain Speedway on May 13. The pair of Tennessee tracks have been on the Series schedule since 2013. The central location of the state in the realm of Late Model country allows a good turnout of nationally recognized drivers to appear at the events in hopes of stealing the purse from the Outlaws. Last year the Outsiders ran off with the money.

Eric Wells is a man on a mission this season, and his success thus far shows his dedication and eagerness to improve. At this point last season, Wells had not even graced the top-10 of any World of Outlaws race, but this year is a different story. With eight races under his belt for the 2017 season, Wells has six top-10s, three top-fives, and a second-place finish at DIRTcar Nationals, leaving him tied for fifth in points with Rick Eckert. At this rate, Wells may be on the brink of his second-ever Outlaw win.

“It would be awesome to get a win anywhere we are. It doesn’t matter if it’s in Canada or Oklahoma or close to home,” said Wells. “Right now, we are just trying to get a win. We’ve been really close, but we just need some luck to hit the redraw perfectly. I’ve only drawn the front row a couple times since I’ve been running with the Outlaws. Most of the time, whatever the highest number in the redraw is, that is what I get. I hope that luck will be on our side this time, but I’ve been hoping for some luck for 12 years.”

Wells began his Outlaw career in 2013 and has been a mainstay on the Series ever since. During his rookie year at Duck River Raceway the Kentucky-native grabbed his first and only Series win.

“Every time we’ve been there it’s been pretty racey, and I’ve been in a different car every year,” said Wells. “A Bloomquist car, then went back in a Rocket, and now we are going to try it in a Longhorn. These Longhorn cars are really good cars, and we are in a Cornett engine, so the package we have right now just works really good together. I’ve also learned a lot traveling up and down the road to these different tracks and running with these guys over the past four or five years. We have put our dues in and now some reward is coming — not as much as we’d like, but it’s not as bad as it has been.”

Last year it was Dale McDowell who had some luck and found his way to Victory Lane, breaking through an 11-year winless streak with the Series.

The past two years at Smoky Mountain Speedway, Scott Bloomquist has overthrown the Series regulars at the semi-banked 4/10-mile clay oval. In 2016, Chris Madden charged from sixth to second at the start but was unable to catch up to Bloomquist, who at one point held a four-second lead over the rest of the field.

Chris “Smokey” Madden is no stranger to Smoky Mountain Speedway as the track appeared on his schedule four times in the 2016 season. During his four visits, he found the podium three times, including two wins and one second-place finish.

“It’s a real fast place and I like high-speed places, so that’s why I like to go up there to race,” said Madden. “You have to have a combination of a good car and a good driver to run well there. It gets slick in the feature. It puts a lot of the driving back to it. The Series is on our end of the country, so hopefully we have a chance of overtaking the lead in the points and then just do the best we can when we are out on the road.”

World of Outlaws Craftsman Late Model Series 2015 Rookie of the Year Brandon Overton will also be in the mix of drivers who will pose a threat to Victory Lane at the Tennessee tracks. Overton is currently one of the hottest Late Model drivers in the country with three wins in his last three races.

“This is a huge event for us,” said track promoter Casey Moses. “It is one of our biggest events that we have all year. We only host Super Late Model shows at this track, so every event we hold is a special event and people from all over come to watch the races here because of how fast this track is, the type of show it puts on and the quality of drivers who show up to run here. Our fans mark this event on their calendar every year and look forward to it.”

Tickets for both World of Outlaws Craftsman Late Model Series events will be available at the track on the day of the race; Duck River Raceway on May 12 and Smoky Mountain Speedway on May 13.