The Light in Her Father’s Eyes 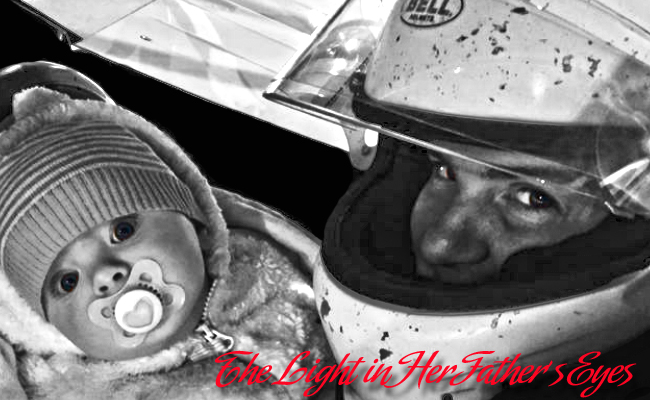 The Light in Her Father’s Eyes

Steve Casebolt both a full-time racer and family man

CONCORD, N.C. – Sept. 20, 2016 – Once upon a time, a regal red Chevy Corvette pulled into Hayley Reynolds’ real estate office parking lot, and unbeknownst to her at the time, she would eventually take the last name of her prince charming behind the wheel. Though, Steve Casebolt did not meddle in sports cars. Rather, he raced an 800-horsepower dirt late model. The two wed six years later, and began their storybook lives together not in that ‘Vette, but in a race hauler traveling the country.

Steve rose through the ranks in racing from the time he was six years old, starting in go-karts and then working his way into a late model by the time he was 18. Hayley on the other hand, a small-town girl, had never heard of late model racing until she met Steve. Even so, she embraced the racing culture and in short time, she developed the knack of crewing Steve’s No. C9 racecar.

Steve, now in the nation’s most premier dirt late model racing series, balances on a teeter-totter of racing and fatherhood. The couple welcomed baby Harper into the world two years ago, which has shifted Steve’s priorities while competing in the World of Outlaws Craftsman® Late Model Series.

“I was like, ‘Hm, I might like this little fella,’” said Hayley, reminiscing on the time they first met. “We started talking and that was the end of it – life sentence.”

Along for the ride country-wide was Hayley’s wiener dog, Sampson. The full-timers on the tour would call him “The King of the Racetrack,” and they looked for him at every race. Hayley even helped crew Steve, offering pointers before he took to the track and letting him know where he stood nightly.

“She knows when I’m fast, knows when I’m not,” Steve said. “She can normally tell me when I messed up on the race track, or if I’m doing something wrong. She can tell me why. I mean she actually is a good spring board to ask questions to at the race track because she really pays attention and watches what’s going on while I’m out there. Not only can she do that but she can also do a good job with it and gives me the right information, which is really a neat thing.”

These were not trying times for the dynamic duo, as Steve eventually solidified himself as a threat in the series; he is currently sixth in points, 80 points away from breaking into the top five. That was up until January 2015, when Steve and Hayley lost their companion. Sampson, nearly 17 years-old, passed away. There was a void, but the couple had a little bundle of joy they introduced to the racing lifestyle that very year.

Harper went to her first race at just seven months old. Hayley and Harper flew to Bubba Raceway Park in Ocala, Fla. to see Steve compete in the Late Model Winter Nationals. Though he was one place shy of a top ten finish the first night, Steve finished fourth in the finale.

From there, Harper’s little racing tendencies began to take shape. She enjoys jumping on her trampoline, swinging on her swing set and coloring in her coloring books, but Harper also has her own collection of toy cars – of course in the collection is a No. C9 die-cast car. Coincidentally, that die-cast symbolizes a father-daughter bond she does not get with the other cars.

“She takes all her cars and lines them up nice and neat which is what I used to do as a kid,” said Steve, his voice getting upbeat. “That’s what my Mom told me I used to do. She looks a lot like my baby pictures to me, so I mean that’s kind of neat for her to look like me. She does the same sort of things like I did, too.”

When Harper lined-up all of her cars, she realized someone was missing from one of them. Looking inside her No. C9 die-cast, she did not see her father. But, she did at Tyler County Speedway. Among the plethora of cars competing at the Jackpot 100, Harper could point out her father’s car. When she saw Steve idling into staging, she got excited, waving and saying, “Hi, Daddy!” For Steve, the moment was life-changing.

Though Steve has not had a fairytale year, he does not dwell on it. If he had a bad night of racing in the past he would get down on himself, questioning why he was even racing at times. But this year is different. If Hayley and Harper are not cheering him on at the track, they are waiting for him at home. No matter the outcome, he was going to go home to have his routine Sunday lunch and playtime with the ones he loves the most.

“What it does is it makes you realize that racing really isn’t important at all,” Steve said. “We’re either going to do well or we’re not, and I’m going to leave it at the race track and not worry about it. I’m going to be happy that I have Harper and that everything is going well with her. Just having her come up all smiles to give me a hug, you forget you even have a racecar. I don’t have to worry about that anymore.”