The Firecracker Countdown Is On 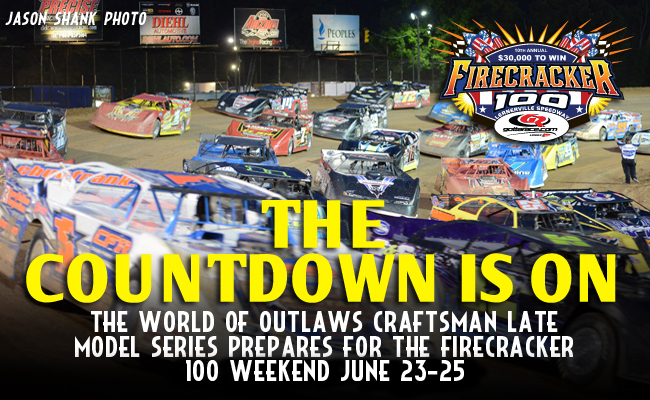 The Countdown is on to the Firecracker 100 Weekend

Three times the racing, three times the party as one of the year’s premier late model events counts down to a kick off at Lernerville Speedway

SARVER, Pa. – June 7, 2016 – The countdown is on to the Firecracker 100 weekend at Lernerville Speedway as one of racing’s biggest parties kicks off on Thursday, June 23 and runs until Saturday, June 25.

The Firecracker weekend presented by GottaRace.com is three days of racing and three times the party. This season, the World of Outlaws Craftsman® Late Model Series celebrates the 10th anniversary of one of racing’s biggest parties.

“The Firecracker 100 has quickly become one of the Northeast’s favorite racing traditions,” said Lernerville Speedway General Manager Gary Risch Jr. “Incredible racing from the best late model drivers in the country combined with concerts, kickball and parties make it a can’t miss event.”

The Firecracker weekend includes three feature events kicking off on Thursday with the 100-lap main event on Saturday night. Between the three days, a driver can leave with more than $42,000 in winnings.

“This weekend is one that every competitor on the World of Outlaws tour has circled on his calendar and looks forward to all year,” said World of Outlaws Craftsman Late Model Series Director Tim Christman. “In many ways, Lernerville Speedway is the home track for the World of Outlaws late models, so beyond the prestige of winning the event, it is always special to win at home.”

Last year, Rick Eckert picked up the win over eventual series champion Shane Clanton in a barn-burner for the books. The York, Pa. juggernaut led the last 36 laps of the race, becoming the first home-state driver to capture the Firecracker 100 in the event’s history.

“I would really like to repeat at Lernerville, I really would,” Eckert said. “The Firecracker 100 is a great race, and it attracts a lot of people. It’s just a cool atmosphere.”

Fans will have the opportunity to battle their favorite drivers in the annual cornhole competition and a driver showdown will take place off the track as the Outlaws compete in the annual “Kick-it” tournament, a charity kickball tournament organized by the Jeff GordonChildren’s Foundation. The proceeds will go to children’s cancer research.

A dazzling fireworks show will light-up the night following Saturday’s feature event. To cap-off an exhilarating weekend, live music presented by Froggy Radio will be playing all weekend long, with concerts on Friday and Saturday nights.

Tickets for all three days of the 10th Annual Firecracker 100 weekend are available now by calling 1-844-DIRT-TIX (347-8849), or by visiting WorldofOutlaws.com/Tickets. General Admission is $34 for both Friday and Saturday, and $40 for the finale. Three-day passes are available for $69.