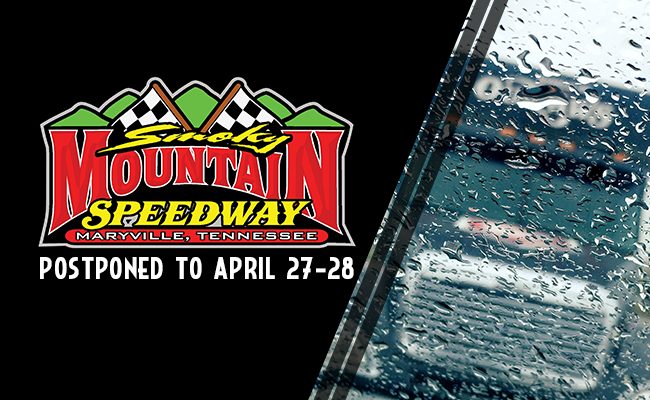 CONCORD, NC – March 7, 2018 – Fans eager to attend the Tennessee Tipoff featuring the World of Outlaws Craftsman® Late Model Series this weekend at Smoky Mountain Speedway will have to wait a little longer than expected as track and series officials have postponed the event to April 27-28.

The Tennessee Tipoff will feature the same format originally planned for this weekend, including a night of practice on Thursday, April 26 followed by two complete programs on April 27-28. Both programs will feature a full slate of World of Outlaws time trials, heat races, Last Chance Showdowns and 50-lap, $10,000-to-win Craftsman Club feature races.

“We want our fans, drivers and sponsors to have the most enjoyable experience possible at all of our events, and with below freezing temperatures and expected rain for this weekend that expectation will not be met,” said Series Director Matt Curl. “With a reschedule date already in place for this event, we are going to utilize it in hopes of better weather to come on April 27-28.”

Tickets purchased in advance will be honored during the postponed event. Tickets are still available for purchase here.

The NeSmith Chevrolet Late Models and Kajun Mini Stocks will not be part of the rescheduled event, but will appear later in the season at Smoky Mountain Speedway.

The World of Outlaws Craftsman Late Model Series’ next event will be the 11th annual Illini 100 at Farmer City Raceway on March 23-24. A night of practice is slated for Thursday, March 22, followed by two complete shootouts. Friday’s event will be an always thrilling wide-open 25-lap $6,000-to-win followed by Saturday’s 75-lap and $15,000-to-win headliner.

For more information on the World of Outlaws Craftsman Late Model Series, visit www.woolms.com. For behind the scenes coverage, race day line ups and much more follow the Series on Twitter and Facebook.