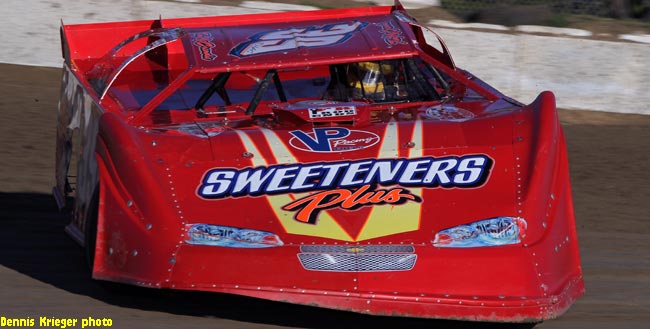 Between watching his superstar father, ‘Barefoot’ Bob McCreadie, wheel around the half-mile fairgrounds oval in a DIRTcar big-block Modified as a kid to forging his own driving legacy there as an adult, T-Mac has spent hundreds of nights at the ‘Land of Legends.’ It’s effectively his home-away-from-home, a bastion of familiarity that sits two-and-a-half hours southwest of his native Watertown, N.Y.

As the World of Outlaws Late Model Series heads to Canandaigua on Tuesday night (June 25) for a 40-lap, $8,000-to-win A-Main sponsored by the Sweeteners Plus corporation owned by McCreadie’s team owner Carl Myers, the 39-year-old standout can’t help but think about his years at the track. The nostalgic moment would seem like a perfect time for the former WoO LMS champion and current regular on the national tour to detail his top five Canandaigua memories – a list that appears below.

No. 5: His Modified debut. In April 1996, McCreadie launched his dirt-track career at Canandaigua. He entered the track’s big-block Modified season opener as a 22-year-old with a no-frills, self-owned 358-Modified that he would run at facilities closer to his Northcountry residence for the remainder of the season.

“Can-Am (Motorsports Park in Lafargeville, N.Y.) wasn’t open yet so we went to Canandaigua with our small-block car with no paint because I didn’t have it lettered yet,” remembered McCreadie. “I ran two weeks there before we went racing back home. I got lapped on like lap 10 or 11 both weeks and immediately pulled in because I didn’t want to be in anybody’s way, but I got enough laps to get my feet wet. A few weeks later I won my first 358 (Modified) race at Brockville (Ontario Speedway).”

No. 4: A 358-Modified Series score. In 2003 – McCreadie’s first season driving for the Sweeteners Plus team – he concentrated on big-block Modified racing. But when the DIRTcar 358-Modified Series had a special mid-week event at Canandaigua on Aug. 20 of that year, he pulled a small-block engine out of the corner of the Sweeteners Plus headquarters, bolted it in his No. 39 and promptly won the extra-distance feature.

“We took the oldest motor we had in the shop that hadn’t been run in like a year-and-a-half,” said McCreadie. “We had to free it up with some of that mystery oil to make sure it wasn’t seated in, and then we fired it up, put in the trailer and went over to Canandaigua and won. It was one of the only small-block races I ran all year.”

No. 3: His father’s most unlikely victory. ‘Barefoot’ Bob won 99 DIRTcar big-block Modified features at Canandaigua from 1983-2002 – a total that ranks him second on the track’s alltime win list – but none stand out in his son’s mind more than his 50-lap Bobby Allison Night triumph on Aug. 18, 1984.

“He won the big-block race with a small-block (engine) because he didn’t have any more big-blocks to run,” remembered McCreadie. “Those were 320 (cubic inch) small-blocks back then and they couldn’t really compete with big-blocks, but everything lined up for him that night.

“That was pretty exciting for me,” he continued. “I had nothing to do with it – I was just up in the stands watching – but for him to go there and beat all those big-block guys with (NASCAR Sprint Cup star) Bobby Allison in the place running a Miller American Modified that night was pretty amazing to me.”

No. 2: First big-block triumph. On Aug. 28, 1999, McCreadie broke through to register his initial big-block Modified feature win at Canandaigua. He will never forget the circumstances surrounding the victory.

“When I started going to Canandaigua regularly my crew guys from home couldn’t go that far away so I would go down there every week by myself,” said McCreadie. “My dad’s guys would help me a little, but they were busy with their own stuff so I was basically on my own.

“Every week Justin Haers would run in the Sportsman division and his crew guys, Jeff Nieskes and ‘Buck’ (Kevin Root), would come over to my car after Justin ran and help me out to get ready. The night I won, Justin also won the Sportsman feature. So both of his crew guys got (Victory Lane) pictures with two different cars that night. That was pretty cool and definitely very satisfying.”

No. 1: Emotional WoO LMS checkered flag. On June 23, 2009, McCreadie steered his Sweeteners Plus dirt Late Model to a World of Outlaws victory that set off a giant post-race celebration on Canandaigua’s homestretch. With the triumph coming in just his third start after returning from a back injury that had kept him out of the cockpit for six months, McCreadie was inundated by family, friends and fans in Victory Lane.

“That was pretty cool,” said McCreadie. “That was like when my dad won Syracuse (DIRTcar big-block Modified racing’s most prestigious event). It was like everybody wanted to be down on the track and be a part of our win. That definitely makes you think that you’re lucky to have people who pay attention. We can pretend that we’re not affected, but it’s always nice when they’re on your side. It’s a lot more fun that way.

“That’s probably my number one moment (at Canandaigua), the best night we ever had there. After spending a couple weeks in a hospital bed and six months in a (back) brace not really being allowed to do anything and winning at Canandaigua in our third race back – I think that was very satisfying. There were people there who were genuinely happy for me to see it go down like that. It was the first time my dad saw me win a Late Model race too.”

What’s more, that day happened to mark the beginning of McCreadie’s relationship with the woman who in July 2010 would give birth to his first child, a son named Gavin.

“That was the first date I had with Karen,” McCreadie said of his girlfriend, with whom he and Gavin now live in a house outside Rochester, N.Y. “Through a couple of friends we met a week earlier and we talked a little bit on the phone, and I asked her if she wanted to go get a late lunch and then go over and watch the (WoO LMS) race at Canandaigua. She said she had been there when she was little but hadn’t been back in years, so her first introduction to real racing was that night.”

He paused, and then added with a smile, “You couldn’t really make it any better for a first date.”

When the WoO LMS visits Canandaigua on Tuesday night for the second consecutive season and fourth time in the last six years, McCreadie will look to make another memory at a track that just might be his favorite.

“How could you not like that track?” said McCreadie, who has 14 career big-block Modified feature wins at Canandaigua and hasn’t finished worse than third in the speedway’s three previous WoO LMS events. “It doesn’t matter where you start there. There’s been nights when you see a guy start 18th and have the lead in six laps, which means you have one helluva racetrack.

“Usually when you have a lot of talent (racing) someplace you can hold each other off by slowing each other down, but at that place you can’t hold anybody back if you’re not better than them. You’re gonna be able to go to the front if you’re fast enough.”

General Admission is $28, with kids 12-and-under admitted for $5 (general admission) with paid adult admission. Reserved seats are $35 and will be available at the track, and pit passes are also $35.

To purchase tickets in advance and obtain more information on the event, visit www.canandaiguamotorsportspark.com or call promoter Jeremie Corcoran at 315-374-2839.