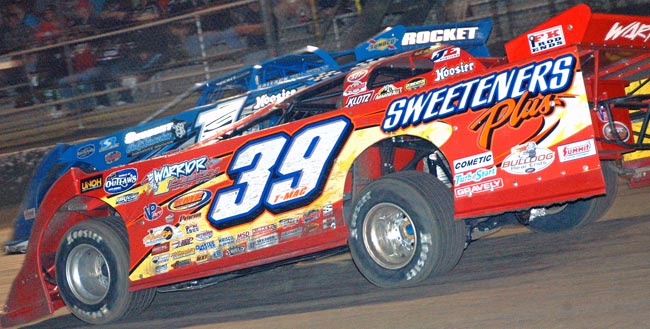 Tripleheader Weekend March 22-24 In Arkansas, Mississippi & Tennessee Next Up For National Tour

CONCORD, NC – March 6, 2013 – Tim McCreadie is finally home in upstate New York following a near month-long, season-opening racing odyssey in the Southeast. But as much as the 38-year-old dirt-track star relishes a break in his schedule that provides time to work on his racing equipment and hang out with his girlfriend Karen and toddler son Gavin, he’s admittedly already eyeing his next trip south.

McCreadie is, quite simply, feeling too bullish about the upward trajectory of his racing fortunes to sit idle. He has a smile on his face and a spring in his step as he prepares for the upcoming World of Outlaws Late Model Series tripleheader that features 50-lap, $10,000-to-win A-Mains on March 22 at I-30 Speedway in Little Rock, Ark.; March 23 at Whynot Motorsports Park in Meridian, Miss.; and March 24 at Duck River Raceway Park in Wheel, Tenn.

“I think our team is headed in a positive direction,” said McCreadie, who is in his second season campaigning Warrior Chassis cars bearing the colors of Carl Myers’s Sweeteners Plus Racing operation. “We’re close to where we want to be and that has me excited.”

Coming off a 13-race, five-track swing through Georgia, Florida and Alabama that saw McCreadie start slow but steadily pick up steam, the popular driver known as T-Mac clearly has his groove back. He’s looking more like the racer who won a WoO LMS-best eight A-Mains in 2005, captured the circuit championship in ’06 and enjoyed a mid-season 2012 run of nine straight top-five and 16 consecutive top-10 finishes than the struggling guy whose lone top-five outing over the final 15 World of Outlaws events last year came in the season finale.

After kicking off 2013 with subpar finishes in the WoO LMS’s season-opening doubleheader at Screven Motor Speedway in Sylvania, Ga. (29th on Feb. 8, 16th on Feb. 9) and destroying a car in a vicious practice crash during a DIRTcar UMP-sanctioned event on Feb. 10 at North Florida Speedway in Lake City, Fla., McCreadie came alive. He registered finishes of second, third and eighth during the WoO LMS Bubba Army Late Model Winter Nationals at Bubba Raceway Park in Ocala, Fla.; scored a $10,000 DIRTcar UMP victory on Feb. 20 at Volusia Speedway Park in Barberville, Fla.; placed eighth (twice) and third in WoO LMS shows at Volusia; and was the runner-up in the snow-shortened ‘Bama Bash’ on March 2 at Green Valley Speedway in Glencoe, Ala.

“We had our best Speedweeks in a long time,” said McCreadie, who ended an eight-year absence from Victory Lane at Volusia during the UNOH DIRTcar Nationals Presented by Summit Racing Equipment. “We had some off-nights – like those two nights at Screven, which put us in a hole in the (WoO LMS) points that’s gonna be hard to get out of – but we kept working and trying stuff and got better and better.

“I felt like we were really on to something when we lined up (in the fourth starting spot) behind Darrell Lanigan and Scott Bloomquist (in the 30-lap DIRTcar UMP A-Main on Feb. 19 at Volusia),” he continued. “Looking at that front row in front of us, I thought, We’ve got some heat up here tonight. I’ve been racing with everybody, but it’s been a long time since we’ve been together up front like that with a car that I felt was capable of beating them.

“I ended up hitting the wall (while leading) and knocked myself out, but we passed them. It was fun just to race with Scott and Darrell like that – and to be able to do to them what they’ve done to me the last few years. That’s the kind of thing that gets me excited.”

McCreadie is confident that he can maintain his early-season success over the long haul in 2013. He does not want a repeat of ’12, when he appeared to have his Warrior machine figured out – his nine top-five finishes in a row (including three wins) was a streak that even Lanigan didn’t match during his record-setting championship season – but then fell into a frustrating slump for the remainder of the campaign.

“That stretch just shows the potential of the car,” McCreadie said of his more-than-fleeting flash of brilliance during his inaugural season working with Warrior’s Sanford Goddard. “We started going good and we thought, O.K., we got this and it’s gonna work all the time. But it didn’t. It was a good stretch, but it faded away.

“Looking back, I think we know why it happened. We brought out a new car at the end of the year – just a new frame, really, not a new design or anything – and the last two nights out we were good. I think the other car we had been running had been in some pretty good wrecks and was bent, but we just kept running it.

“I should’ve gone down to Tennessee, put it on the jig and checked it,” he continued. “Instead, I stayed up there in my own little place – like I like to do – with just me and (teammate) Vic (Coffey) and tried to race our way out of (the slump). The problem was, I should’ve realized that Sanford is here to help me and not take away from me, so sometimes you gotta put your pride away and do the right thing. If I would’ve gone down there (to Goddard’s shop), we probably would’ve found out what was wrong and corrected the program. Well, we didn’t, we raced it out, and you saw 10, 15 more races that were terrible.

“That’s me. It’s nobody’s else’s fault – not Warrior’s fault, not (engine builder) Bill Schlieper’s fault, not Vic’s fault, not Sweeteners. That’s my call why we did that, and we learned a lesson. We gotta be part of this deal (with Warrior) a little more, and I think it’s bearing fruit already this year.”

According to McCreadie, his close collaboration with Goddard will ultimately be the key to his consistent success in Warrior cars. Together they are striving to create a program that matches the well-established, streamlined teams of Lanigan and two-time WoO LMS titlist Josh Richards.

“You look at those teams, those programs, and it’s been 10 years building those programs to where in the last three, four years or so they’ve really shown their promise,” said McCreadie. “We’re in year two of that process, with the same idea where I’m working with a guy who will do anything I want to do if I can dream it up. I don’t understand where that will ever be seen as a bad thing.

“I’m real excited about where we’re going with our deal. If we keep doing what I think we started this year, I think the sky’s the limit.”

McCreadie will enter the next weekend of WoO LMS action sitting fifth in the points standings, 104 points behind leader Richards. His deficit was already 82 points after the season’s first two events at Screven, so he’s effectively battled neck-and-neck with the four drivers ahead of him in the standings – Richards, Shane Clanton, Lanigan and Rick Eckert – over the past six races.

Both McCreadie and the WoO LMS will blaze new territory with the March 22-24 tripleheader. McCreadie has never raced at I-30 Speedway, Whynot Motorsports Park and Duck River Raceway Park – and all three tracks will host the full-fender World of Outlaws tour for the first time. The event at I-30 will mark the tour’s first-ever stop in Arkansas.

McCreadie has never won a race in the state of Mississippi; his last appearance there was for a WoO LMS event on March 19, 2011, at Columbus Speedway. He owns an excellent track record in Tennessee, however, winning WoO LMS events at Wartburg Speedway (2010) and Clarksville Speedway (2005) and the ’09 Scorcher at Volunteer Speedway in Bulls Gap, and he also won in front of Arkansas’s fans in 2008 when he captured the Topless 100 at Batesville Speedway.