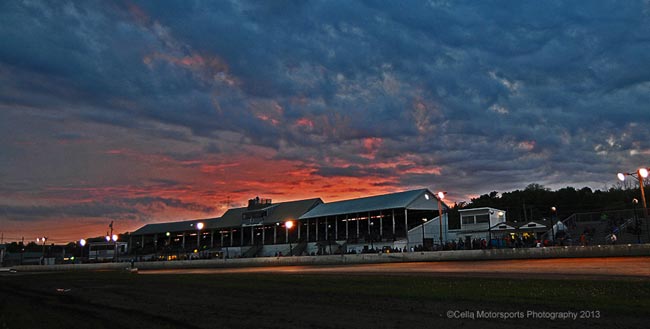 But for Tim McCreadie and Tim Fuller, the race means so much more.

As natives of upstate New York whose racing roots lie in the Northeast’s Big-Block Modified class, McCreadie and Fuller understand the significance of the half-mile oval known as ‘The Track of Champions.’ With the speedway oozing six decades worth of Modified history, Fonda is hallowed ground for racers like them.

“It’s just one of those places where so many great Modified drivers have run over the years,” said Watertown, N.Y.’s Fuller, who developed into one of DIRTcar Big-Block Modified racing’s top stars before switching his focus to the WoO LMS in 2007. “If you drive a Modified, you know about Fonda Speedway. Every Modified driver would like to win a race there.”

Neither Fuller, 45, nor McCreadie, 39 and also from Watertown, N.Y., have ever been Big-Block Modified regulars at Fonda. But both have entered numerous specials there throughout their careers, including several in recent seasons while moonlighting behind the wheel of Modifieds during breaks in the WoO LMS schedule.

McCreadie has enjoyed the most Fonda success of the pair. He owns two career Big-Block Modified triumphs at the track: a Super DIRTcar Series score a decade ago and, most recently, a checkered flag in April 2004 driving his Sweeteners Plus teammate Vic Coffey’s Modified. Three years ago, in Fonda’s 2010 season finale, he finished second in a 100-lapper to Stewart Friesen, the Niagara-on-the-Lake, Ont., native and defending Fonda Speedway Big-Block Modified champion who is scheduled to make his dirt Late Model driving debut on Wednesday night in a car fielded by WoO LMS veteran Chub Frank of Bear Lake, Pa.

“I probably haven’t run more than 15 or 20 total races there but I’ve usually run good,” said McCreadie, who followed the WoO LMS for the first time in 2004 (winning Rookie of the Year honors), led the tour in A-Main wins in ’05 and captured the championship in ’06. “It means a lot to win there, to stand on that Checkeredboard Square (in Victory Lane). My dad (Big-Block Modified legend ‘Barefoot’ Bob McCreadie) won some big races there so it was cool when I finally got a win there too.”

McCreadie has paid enough visits to Fonda to become familiar with the track’s quirks, including the curved back straightaway that runs parallel with the Mohawk River.

“It has a big, sweeping backstretch,” described McCreadie. “It’s basically one long, sweeping corner down the backstretch, so you carry a lot of speed through (turns) three and four. It races a little bit like Merrittville (Speedway in Thorold, Ont.) the way the backstretch is shaped. Fonda is bigger the surface is different, but, just like at Merrittville, you don’t really lift until you get to the exit of (turn) four.

“That backstretch makes the car handle a little different,” he added. “I’m not sure how one of these Late Models will handle through there, so it’ll be interesting.”

The wrinkle for McCreadie entering Wednesday night’s 50-lap, $10,000-to-win WoO LMS affair is that he’s never run a dirt Late Model at Fonda. He’s heard some positive words about full-fender racing at Fonda, however, from such pals as Caledonia, N.Y.’s Coffey and Big-Block Modified star Billy Decker of Unadilla, N.Y., both of whom have dirt Late Model experience there in Lucas Oil Late Model Dirt Series events. Coffey finished second in the 2010 race and Decker recorded finishes of fifth (’10) and 17th (’11).

“Vic said the Late Models were real quick there and they raced all over it,” said McCreadie. “That’s really all we always hope for. When that’s the case, the racing will be good.”

Fuller doesn’t have a Big-Block Modified victory at Fonda on his resume, but he’s been close. (Most notably, he remembers running out of gas while leading late in the Fonda 200 one year.) He’s also made enough Fonda starts to realize what lies ahead for him Wednesday night.

“I’ve always liked Fonda,” said Fuller. “It’s easy to drive when (the surface is) heavy, but when it gets slippery there’s a special knack to getting around that place. Guys like (Fonda Big-Block Modified standouts) Jack Johnson and Bobby Varin, they grew up there and they have that knack.

“It’s basically just a big circle, so it’s all about momentum there. The line will be on the bottom for a while, then it’ll go to the top – it just goes back-and-forth. That’s why it’s always pretty racy.”

Both McCreadie and Fuller and glad to see Fonda on the WoO LMS schedule.

“I always like being close to home and racing for good money,” said McCreadie, who enters Wednesday night’s action ranked sixth in the WoO LMS points standings with two A-Main victories to his credit this season. “It’s nice to see Fonda (promoter Ric Lucia) stepping up to the plate and having a big Late Model show.”

Fuller, who sits fifth in the circuit points standings, is hopeful that his familiarity with Fonda will help propel him to a much-needed triumph on the WoO LMS. When he takes to the Fonda oval, his winless streak on the tour will have gone past three years.

“I need a win bad,” said Fuller, who is winless in his last 116 WoO LMS races since grabbing the checkered flag on June 17, 2010, at Merrittville Speedway. “Maybe racing close to home will be what we need to get back into Victory Lane.”

Among the 11 WoO LMS regulars, only two other drivers share prior Fonda experience with McCreadie and Fuller. Rookie Eric Wells of Hazard, Ky., competed in both of the track’s Lucas Oil Series event (he finished 14th in ’10 and 19th in ’11) and Bub McCool of Vicksburg, Miss., placed 10th in the 2011 race.

Outlaws who will make first-ever visits to Fonda include Frank; points leader Josh Richards of Shinnston, W.Va.; defending champion Darrell Lanigan of Union, Ky.; Shane Clanton of Zebulon, Ga., whose four victories this season ties him with Lanigan for the series lead in the category; 2011 champion Rick Eckert of York, Pa.; Clint Smith of Senoia, Ga.; and rookie Morgan Bagley of Longview, Texas.

Pit gates for Wednesday’s program, which also includes a 30-lap, $3,000-to-win feature for the Big-Block Modifieds, will open at 4 p.m. and spectator gates at 5 p.m. Racing is scheduled to get the green flag at 7 p.m.

General admission is $30. Tickets for children ages 6-11 are $3 and kids 5-and-under will be admitted free of charge.

More information on Fonda Speedway is available by logging on to www.fondaspeedway.net or calling 315-582-3115.

Fonda Speedway is located about 45 minutes northeast of Albany, just off Exit 28 of the New York State Thruway.