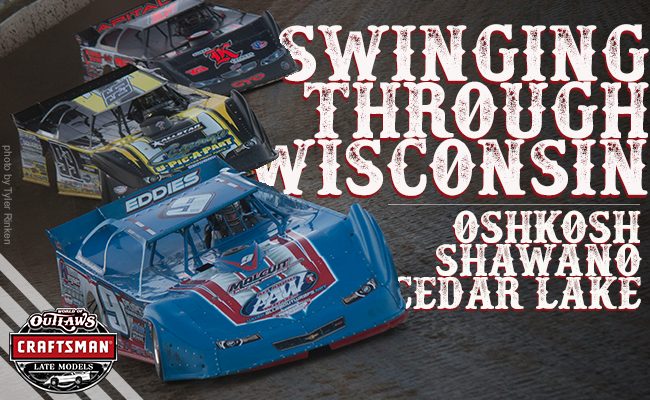 CONCORD, NC— July 17, 2017— The World of Outlaws Craftsman® Late Model Series will head to Wisconsin to spearhead the month of August with an action packed first five days of the month. Two events back-to-back will be a nice tune-up leading into the USA Nationals at Cedar Lake Speedway for the biggest payout of the season— $50,000.

On the first of the month, the Outlaws will invade Oshkosh SpeedZone Raceway for the first time in Series history. Only a few Outlaw drivers have ever made laps on the third-mile clay oval, but everyone is up for the challenge because the best drivers in the country have to be prepared for anything and be able to adapt to everything.

Rookie of the Year contender, Devin Moran, has visited several new tracks this season as the tour has taken him to parts of the country he has never seen. With 15 top-10 finishes, including one win and four trips to the podium, the young driver is making a name for himself all over the country as one of the next big names in the industry.

When Moran pulls into Oshkosh, WI it will be familiar territory. In 2015, Moran took on the Lucas Oil Late Model gang and left the track with a fourth-place finish at only 20 years old. This year he is looking forward to heading back to the track in his Tye Twarog/ Donnie Moran Racing machine with a little more experience under his belt.

“I like that place, and I kind of know what to expect when we are going there, but I feel like when you know what to expect or what’s going to happen that’s when you run bad,” said Moran. “Hopefully, we can go there and make the right decisions, and we can come out of there with a top-five finish.  That’s my biggest thing right now; we just need top-fives so we can stay in that points run. If we keep running good, hopefully we can come home with a second place in the points and the rookie of the year.”

The following night, Moran and the Outlaws will head to Shawano Speedway for the Sundrop Shootout. The Series has consecutively visited the half-mile oval for the last seven years. Across the board, Rick Eckert has had the most consistent runs at the Wisconsin dirt track with five top-fives and six top-10 finishes. The Series veteran has only fallen outside of the top-10 one time there, finishing one spot shy with an 11th-place run in 2010.

“It’s a big, big half-mile track and that’s what I grew up racing on so that’s probably why I do pretty well there,” said Eckert. “I’m looking forward to going back again this year. Hopefully after so many decent runs we can finally come out of there with a win.”

To wrap up the Wisconsin swing the Outlaws head to Cedar Lake Speedway on August 3-5 for one of the biggest Late Model events around the country: the USA Nationals.

Before the season began, Moran had his eyes set on the World of Outlaws Craftsman Late Model Series event at Cedar Lake. The aggressive driver, paired with his father Donnie’s notebook from the track, is a surefire recipe for success. Donnie won the USA Nationals in 1998.

“Cedar Lake is a place that I grew up at,” said Moran. “When I was young, I went all over the country with Dad, and that’s one place he always looked forward to going and racing. It’s always such an awesome environment and atmosphere, and the fans truly love the racing there. It’s high stakes with the really big payoff, and they usually do a really awesome job with the track prep. It’s just one of those places you always look forward to going to.”

Tickets are currently available for the World of Outlaws Craftsman Late Model Series event at Oshkosh SpeedZone Raceway on Aug. 1 here and Cedar Lake Speedway on Aug. 3-5 here. Tickets for the Outlaw event at Shawano Speedway on Aug. 2 will be available at the ticket booth on the day of the event.